Dolphinton is a village and parish in Lanarkshire, adjacent to the border with Peeblesshire. The village is located seven miles north-east of Biggar, 11 miles north-east of Carstairs, 10 miles south-west of Leadburn and 27 miles south-west of Edinburgh, on the A702 road. The easternmost point of the parish where it reaches its apex on the Tarth Water is also the easternmost point of Lanarkshire.

The local manor belonged in the 12th century to Dolfine, elder brother of the first Earl of Dunbar. The estate was owned in various forms by the Brown family from the sixteenth till the nineteenth centuries, when it passed to the McKenzie family by marriage. 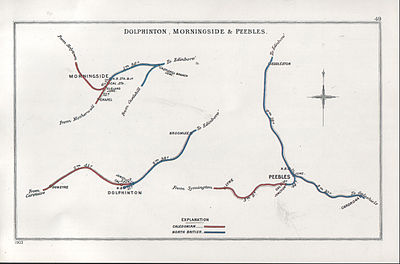 The village once had two railway termini, now long since closed. The Leadburn, Linton and Dolphinton Railway was the first to reach Dolphinton; the line, from the Peebles Railway at Leadburn, opened on 4 July 1864.[1] In 1867 the Dolphinton Branch was opened, connecting Carstairs Junction to the Leadburn line at Dolphinton.[2]