Pencaitland is a village in East Lothian, about five miles southwest of Haddington, and a mile east of Ormiston. For commuters, Edinburgh is just 12 miles to the northwest

The land where the village lies is said to have been granted by William the Lion to Calum Cormack in 1169, who gave the church, with the tithes and other property belonging to it, to the monks of Kelso, in whose possession it remained till a short time prior to the accession of Robert Bruce. The land subsequently became the property of a younger branch of the Maxwell family, who granted the advowson and tithes to the monks of Dryburgh Abbey, who held them until the Reformation.[1]

The name "Pencaitland" may derive from the Old Brythonic meaning "Head of the Woodland"[2] (which in Modern Welsh would be pen coed). 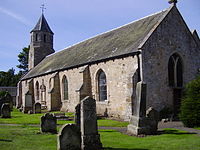 The Pencaitland parish Church of Scotland, at Easter Pencaitland, is apparently of the 16th or early 17th century, but probably standing on mediæval foundations.

The west tower contains the Saltoun aisle, formerly entered through a fine mid-seventeenth century door in the west wall; and there is a chapel at the northern end. Immediately east of the Saltoun aisle is a two-bay chapel, said by some to date from the 13th century. The west tower is square for most of its height, but at the top it contains an octagonal belfry and dovecote. The building has a pointed slated spire dating from 1631.

Over the centuries the building has been much altered. The front row of pews in the Saltoun aisle are of Dutch character in oak, c.1600. The organ was installed in 1889.[3]

The manse, to the south of the church, was erected in the early 19th century in a 'pretty Gothic' style with canted bays.

Half a mile northwest of Pencaitland is Winton House. The original square tower house was built in the 15th century on land granted to the Setons by King David I around 1152, and is mentioned in a charter to them from William the Lion in 1169.

During Henry VIII’s ‘Rough Wooing’ the tower was burnt by the Earl of Hertford's forces, and subsequently repaired, restored, and later enlarged by George Seton, 3rd Earl of Winton from 1619.

Architecturally, Winton is one of the most important of houses, due largely to the work of William Wallace, a mason who was appointed the King's Master Mason in 1617.[4]

This "peculiar and beautiful structure",[5] is situated on a steep embankment sloping down to the valley of the Tyne. Hunnewell says: "this Jacobean mansion was that of Ravenswood in The Bride of Lammermoor. There is, of course, a ghost-room in the upper part of the house; but I saw nothing uncanny about it, twice that I was there."

In 1630, Lord Winton had completed half of the house, beginning at Wallace's Tower, which had been burned, and continuing as far as Jacob's Tower. Another room, called the King's Chamber, is said to have been occupied by Charles I when he came to Scotland to be crowned in 1633, although most records have him staying at Seton Palace.

At the union of England and Scotland in 1707, the Earl of Winton caused to be carved on a fine stone tablet upon the frontispiece of his new building a crown supported by a thistle between two roses, signifying the union. Under it he caused to be inscribed in deep letters of gold this Latin verse: Unio Nune Stoque Cadoque Tuis.

The Wintons' tenure lasted until 1715 when George Seton, 5th Earl of Winton supported the Jacobite rebellion of that year. He was captured and taken to the Tower of London, and ultimately forfeited his land. The Earl's capture ended an era when kings were entertained and master craftsmen were engaged fresh from Edinburgh Castle to embellish Winton House in the style of the Renaissance. In the absence of the Earl but in his name, Winton was requisitioned by Bonnie Prince Charlie in 1745 when his rebel army camped on the Winton estate.

Winton is now the family home of Sir Francis and Lady Ogilvy.

Three-quarters of a mile southwest of Pencaitland is Fountainhall, a late 16th century mansion extended in the early 17th century on the same intimate scale and with the same materials, fine-grained harlings matching the pale yellow sandstone of the chimneys, crowstep gables, and other dressings. The estate's original name was Woodhead, and was purchased by John Pringle in 1635 who carried out extensive alterations and enhancements. On 13 August 1681 the estate was purchased by John Lauder of Newington, a rich Baillie of Edinburgh, for whom the house and lands were erected into the feudal barony of Fountainhall, becoming the seat of that family. Tradition states that the part of the property to the east contained a courtroom for the barony.

Most of the internal finishings are the work of the Lauders from the early 18th century, with much panelling and plaster cornices. After the Lauders finally parted with Fountainhall in the 1920s, the removal of a lath-and-plaster wall revealed a tapestry in situ, dating from about 1700. There is a 17th-century walled garden adjoining the east of the house, and to the south of the house is a ruined 17th century dovecote, later imitated by the erection of another, identical, nearby. The Royal Commission on the Ancient and Historical Monuments of Scotland suggests that the two buildings flanked an 18th-century pedestrian access to the house.[6]

Professor John (Ian) Holbourn bought Fountainhall in 1922 and renamed the house Pencait Castle. Professor Holbourn, who was a survivor of the Lusitania sinking in 1916, was the owner and laird of Foula in Shetland. The house was sold after the death of his wife, Marion, in the 1950s.[7] In 1956, Mr. and Mrs. Ian and Trudy Cowe bought the house, returning the name to Fountainhall. In 1988, the house came into the hands of their son Robert and his wife Alison in whose possession the house remains. (2009) [8][9]

The Pencaitland to Ormiston railway walk follows the course of the Edinburgh - Gifford branch railway line, originally built by the Gifford and Garvald Light Railway Company in 1901, which was closed in 1965.

Pencaitland is the location of recording studio Castle Sound Studios, founded by producer Calum Malcolm in 1979 [10] and sited in a building which formerly housed Pencaitland Primary School until it moved to an area known as The Glebe in the 1970s. Several well-known names have recorded there.

Located a short distance from the village is Glenkinchie distillery, which produces a fine single malt, marketed by United Distillers as part of their Classic Malts range.

The Trevelyan Hall in Wester Pencaitland was erected in 1883 by Mrs Trevelyan of Tyneholm at a cost of over £1200, in memory of her husband, Arthur Trevelyan, who died in 1880. It is a listed building.[11]