From Wikishire
(Redirected from Royal Commission on the Ancient and Historical Monuments of Scotland)
Jump to: navigation, search

The Royal Commission on Ancient and Historical Monuments are, or were, three separate government bodies each responsible for recording, interpreting and collecting information about the built and historic environment in their assigned area. Each commission was founded in 1908, at the height of the Edwardian era, and each continues its work of recording and maintaining records of monuments and historical sites. The merging of each commission into other government bodies operating in the same area has been proposed on occasion, and none now operates independently as hitherto.

The work of the commissions is to record, interpret and collect information about the built and historic environment, which may relate to buildings, sites, and ancient monuments of archaeological, architectural and historical interest (including maritime sites and underwater constructions), as well as historical aspects of the landscape. The information is then made available to academia and to the public, mainly at no cost.

The three commissions were founded in order:

The commissions became known in due course as "The Royal Commission on the Ancient and Historic Monuments of Scotland" and likewise of Wales and of England respectively.

The Commissions for Scotland and for Wales continue. The Royal Commission on the Ancient and Historic Monuments of England was recently merged into English Heritage.

There was never a Royal Commmission for Ireland. A great deal of work listing and categorising Irish monuments was also done though by the Royal Society of the Antiquaries of Ireland.

The Irish Free State enacted the National Monuments Act in 1930 better to preserve national heritage. HM Commissioners became the Office for Public Works. Only in 1966 was an archaeological survey set up.

The National Monuments Service today provides in the Republic of Ireland the equivalent service to the function of the Royal Commissions in Great Britain an of other bodies such as Historic Scotland.

The Royal Commission on Ancient and Historical Monuments and Constructions in Scotland was created by Royal Warrant in 1908, and it was soon followed by those for Wales and for England.

Critics, including David Murray in his Archaeological Survey of the United Kingdom (1896) and Gerard Baldwin Brown in his Care of Ancient Monuments (1905), had argued that for the legislation to be effective detailed lists of significant monuments needed to be compiled; and had also made unfavourable comparisons between the policies of Britain and its European neighbours. Brown, Professor of Fine Art at the University of Edinburgh, explicitly proposed that the issues should be addressed by a Royal Commission, comparable to the Royal Commission on Historical Manuscripts and his suggestion was favourably received by Sir John Sinclair, Secretary for Scotland, which resulted in the foundation of the Royal Commission on the Ancient and Historical Monuments of Scotland on 14 February 1908, with Brown as one of its first Commissioners. The Royal Commission for Wales was established in August 1908; and that for England in October 1908.[1]

The Royal Commission on the Ancient and Historical Monuments of Scotland (RCAHMS) is an executive non-departmental public body 'sponsored' (which is to say financed and with oversight) through Historic Scotland, as an executive agency of the deveolved executive.

The Commission was established by Royal Warrant in 1908, which recited:

The terminal date of interest was moved forward from 1707 within a few years and later brought up to 1805. The Royal Warrant was revised in 1992. It has been proposed that the RCAHMS be merged with Historic Scotland, the united body to be called 'Historic Environment Scotland'.

The Commission is based in Edinburgh where it has a huge selection of photographs and drawings for consultation. It also publishes a range of books and documents on Scottish architecture and archaeology. Increasingly study has also been conducted of previously neglected industrial and agricultural constructions, as well as 20th century buildings, including high-rise tower blocks.

RCAHMS maintains a database/archive of the sites, monuments and buildings of Scotland's past; while at one time known as the National Monuments Record of Scotland (NMRS), no differentiation is now apparent in RCAHMS publications or on the organisation's website. A growing proportion of RCAHMS's own survey material and material deposited in the archive by others is now available through online databases such as Canmore.

Since 1976 RCAHMS has conducted intensive aerial survey of archaeological sites, buildings, landscapes and natural features. In addition to its holdings of its own (mainly oblique) aerial photographs, it holds the National Collection of Aerial Photography which is one of the largest and most important aerial imagery collections in the world. It contains over 1.8 million aerial photographs of Scotland including large numbers of Royal Air Force oblique and vertical aerial photographs taken of Scotland during and in the years after the Second World War, as well as post-war Ordnance Survey, local and national government, and commercial vertical aerial photographs. RCAHMS also holds over 10 million images of international sites as part of The Aerial Reconnaissance Archives (TARA).

The RCAHMS in conjunction with Historic Scotland hosts a map-based GIS portal called PASTMAP. This allows Historic Scotland,[3] NMRS,[4] Scottish Natural Heritage[5] and some Local Authority Sites and Monuments[6] data sets to be viewed together.

Other online resources include Scran, now managed by RCAHMS, which is a UK charity with a learning image service of over 367,000 images, clip art, movies and sounds from museums, galleries, archives and the media. Scotland's Places is a partnership website giving searchable access to the collections of RCAHMS, the National Records of Scotland and the National Library of Scotland. 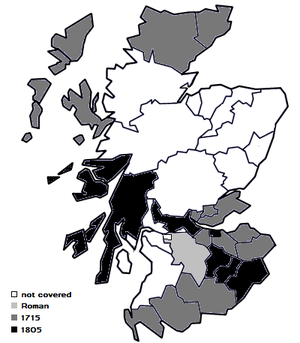 RCAHMS was one of the first national collections in Scotland to embed social media into its online services, enabling user generated images and information to be added to the national database Canmore. An outreach programme includes publications, exhibitions, induction and training sessions for students and other groups, and a series of free lunchtime lectures, as well as daily Facebook and Twitter feeds.

Since 2011, the RCAHMS has maintained the Buildings at Risk Register for Scotland on behalf of Historic Scotland. The register was formerly maintained by the Scottish Civic Trust.[7]

Initially, RCAHMS recorded all buildings and monuments of note until the year 1707. This was later updated to 1805. The findings were published in a series of inventories. Changes in what constitutes a construction "of note", plus developments in how the public could access this information, led to the abandonment of the inventories after publication of the last Argyllshire volume in 1992. Consequently, only approximately one-half of Scotland was covered by this method.

Later work has been based on administrative areas.

The Royal Commission on the Ancient and Historical Monuments of Wales is today a sponsored body of the devolved Welsh government, based in Aberystwyth.

In May 2012, it was announced that the government intended to merge the core functions of the Royal Commission with other organizations, including Cadw.[8][9] Following a consultation exercise, the Minister for Culture and Sport announced in January 2014 that the two organisations would remain separate for the time being.[10]

The RCAHMW maintains and curates the National Monuments Record of Wales (NMRW) holding the national collection of information about the archaeological, architectural and historical heritage of Wales and provides a public information service, drawing on both archival and published sources and benefiting from specialist advice from RCAHMW staff. The National Monuments Record includes drawings, photographs, maps, plans and descriptions for a total of over 80,000 sites, buildings and maritime remains. With 1.5 million photographs, it is the largest photographic archive in Wales.

Coflein is the online database for the National Monuments Record of Wales (NMRW). The name is derived from the Welsh cof lein (line of memory). Coflein contains details of many thousands of archaeological sites, monuments, buildings and maritime sites in Wales, together with an index to the drawings, manuscripts and photographs held in the NMRW archive collections.

The Commission has published over a hundred books developing and promoting understanding of aspects of the historic environment, including its centenary volume in 2008, Hidden Histories: Discovering the Heritage of Wales, which includes a brief account of the organisation's development and discussions of the history of Wales seen in the light of its first century of discoveries.

A five-episode BBC television series following the field investigations of the Commission, Hidden Histories, was broadcast in 2008 on BBC2 Wales and in 2009 on BBC4. A second series was in production in summer 2009. Both series were made by Element Productions Ltd and presented by Huw Edwards.

The Royal Commission on the Historical Monuments of England was merged with English Heritage in 1999.

Under the terms of its warrant, the Commission's remit was "to make an inventory of the Ancient and Historical Monuments and Constructions connected with or illustrative of the contemporary culture, civilization and conditions of life of the people of England, excluding Monmouthshire, from the earliest times to the year 1700, and to specify those which seem most worthy of preservation".[11] A revised warrant of 29 November 1913 extended the terminal date to 1714 (the accession of King George I).[12] A new warrant of 29 March 1946 gave the Commissioners discretion to undertake recording beyond 1714, and an informal terminal date of 1850 was adopted.[13]

The Commission determined from the outset to publish its inventories of monuments, and to compile them on a county-by-county basis.[16] The first county selected for survey was Hertfordshire: the resultant volume was published in 1910. Some 40 inventory volumes were published over the next 70 years, before the project was wound down, in favour of more thematic publications, in the early 1980s.[17][18]

The RCHME took responsibility for the Survey of London on the abolition of the Greater London Council in 1986.

The National Buildings Record (NBR) was established on a partially voluntary basis in 1940 as a survey (primarily photographic) of buildings of national importance considered to be at risk of damage or destruction through military action. Although originally independent of the RCHME, the two bodies shared premises and frequently worked in close collaboration. The NBR continued its activities after the end of the war, and in 1963 was taken over by the RCHME. At this point it was renamed the National Monuments Record (NMR) to reflect the fact that its remit was archaeological as well as architectural.[19] In 1999, with the rest of the Commission's activities, it was absorbed into English Heritage; and in 2012 it was renamed the English Heritage Archive.

The Ordnance Survey had always endeavoured to mark visible antiquities on its maps, and in 1920 had appointed its first archaeology officer: the role had subsequently developed into a department of specialists maintaining a national record of archaeological sites. In 1983 the responsibilities of the Archaeology Division were transferred to the three Royal Commissions for England, Wales and Scotland.[20]