Ormiston is a village in East Lothian, near Tranent, Humbie, Pencaitland and Cranston, on the north bank of the River Tyne.

The village was an early planned village, founded in 1735 by John Cockburn (1685–1758), one of the initiators of the Agricultural Revolution.

The name Ormiston is old English, from Ormes tun: "Orm's Village" after an otherwise unknown founder. The 'Ormres' family had possession of the land during the 12th and 13th centuries.

The name "Orm" though is known elsewhere and survives in placenames such as Ormskirk and Ormesby. Interestingly, the name means "Serpent" and where it turns up in another "Ormiston", in Berwickshire, near Linton, there is the legend of the Worm of Linton.

The village consists mainly of a broad Main Street, with a row of mostly two storey houses along each side. It crosses two bridges, one over the now redundant railway route, and the other a narrow bridge over the river Tyne. Using strict guidelines for its appearance, John Cockburn put housing for artisans and cottage industries (spinning and weaving) around the original mill hamlet. When he did not achieve the expected return on his investment, he sold it to the Earl of Hopetoun in 1747.

The linen trade became a failure, and by 1811 the distillery shut down. A brewery and one of Scotland's first bleachfields were also built here as well.

Ormiston later became a mining village. The Ormiston Coal Company, whose workings were south of Tranent in East Lothian. The company were one of a number of small concerns working either a single or a few linked, small pits on the East Lothian coalfield. ([1]).

The principal collieries at Ormiston were: 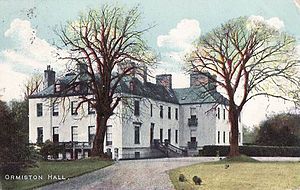 Ormiston Hall, prior to the fire which left it in ruins
Ormiston Hall was built for Cockburn (1745–48) and was later extended for the Earl of Hopetoun.

The religious reformer and Protestant martyr George Wishart was captured in December 1545 by the Earl of Bothwell while hiding at Ormiston Hall.

Ormiston Hall lay to the south of the village. It was built in 1745 but was added to on at least three occasions in the next 100 years. The remains of the pre-Reformation St Giles Parish Church can still be seen nearby.

Ormiston Hall now lies in ruins[2] with residential properties built in and around the grounds.

The Great Yew of Ormiston grows to the south of the hall site. It is a rare example of a layering yew-tree and, according to the Forestry Commission, is as much as 1,000 years old.[3]

The 15th-century pre-Reformation Mercat Cross on Main Street is unusual for its truly cruciform shape, with three modern steps and a railed enclosure. It is not a monument in the care of Historic Environment Scotland.[4]