Osney Bridge is a road bridge across the River Thames in Oxford, built in 1889 to replace a stone bridge which collapsed in 1885.[1] It carries the Botley Road (A420) from Botley into Oxford. The Thames Path crosses the river on this bridge, just above Osney Lock.

The original bridge was probably built by the monks of Osney Abbey, to carry the main road across the millstream of Osney Mill west from the island then known as Osney.[2] By the early 17th century it was a three arch stone construction. In 1790 the millstream became the main navigation channel of the river, and the bridge became a serious obstruction to navigation by the mid 19th century. In 1885 the central arch collapsed leaving massive piers[3]

Osney Bridge has the lowest headroom of any across the navigable Thames. 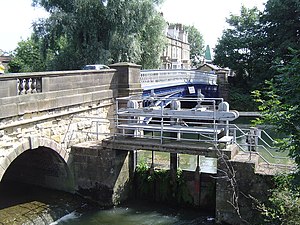 View of bridge with mini-weir from the western side