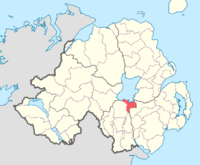 Oneilland East is a barony of County Armagh, in the very northeast of the county, being the parts of County Armagh east of the River Bann. It is also called Clanbrasil, from the Gaelic clan of former days, the Clann Bhreasail.[1]

The barony is part of the larger area of Armagh known as Oneilland, which was a barony before being divided into eastern and western parts. Oneilland East is bordered by three other baronies: Oneilland West to the west in Armagh; and Iveagh Lower to the east and Orior Lower to the south, both in County Down.[2]

Oneilland East and Oneilland West used to form the barony and Plantation precinct of Oneilland, named from its dominance by the O'Neil clan before the Plantation of Ulster. When Oneilland was split in two, Oneilland East consisted of the barony east of the River Bann, corresponding to the ancient Gaelic district of Clanbrassil.

Carrickblacker House is in Oneilland East, and is the home of the Blacker family.[3] The Blacker family are claimed as being descended from the Viking Blacar Goðfriþsson, who was a King of Dublin.[3] On 26 February 943, Blacar defeated Muirchertach mac Néill and his army, near Armagh, allegedly by the River Bann where Carrickblacker now stands.[3]

The towns and villages of Oneilland East include:

The civil parishes in Oneilland East are:[4][5]