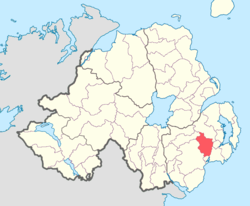 By 1177, the Norman John de Courcy had arrived in Ulster and set about conquering most of eastern Ulster, forming the Earldom of Ulster. The only clans who were able to exist independently in eastern Ulster during this time were in the interior away from the sea-coast, where the Uí Tuirtre, north of Lough Neagh, and the Uíbh Echach.[4]

During the 14th century the Normans in Ulster faded as a result of the Bruce Invasion, with this period seeing the Mac Aonghusa and Mac Artáin clans emerge and expand from Uibh Echach, with their respective territories becoming the basis of the future baronies of Iveagh and Kinelarty.[4] With the fall of Norman power in Ulster, the Clann Aodha Bhuidhe (Clandeboy) branch of the O'Neills took control of north Down, with the chiefs of Kinelarty eventually beceming their tributaries.[3][4]

Early mentions in regards to Kinelarty and the MacCartans include: