Bannfoot is a small village in the townland of Derryinver, County Armagh, on the Upper Bann and by the south shore of Lough Neagh, where the Bann discharges its waters into the vast lough. It is also known as Charlestown. 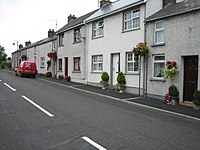 The surrounding area was originally known as Bun na Banna (and this name has been adopted as the modern Irish for Bannfoot,[1] though in application to the village it is pure invention).

There was once a fort at the mouth of the Upper Bann known as Bun an Bhealaigh, meaning "end of foot of the road or pass".[2] This fort has been anglicised in past as "Fort Bunvalle".[1]

In 1760 reference is made of the "Bann Foot Ferry" (sic).[1] Charles Brownlow (1st Baron Lurgan) began building the Bannfoot cottages, to be named Charlestown in the late 1820’s. Brownlow, in sitting Charlestown at the mouth of the Bann, was relying on the continued commercial success of the water routes which criss-crossed the southern part of the Lough. Barge loads of turf were sent from the Montaighs to Portadown and from there on to Scarva, Poyntzpass, Gilford and Banbridge.

A permanent bridge over the river at the Bannfoot was to be an integral part of the Charlestown development for Brownlow as it would have been the first proper link between his Montaighs and Richmond Estates. The ferry at the Bannfoot which survived until 1984 linked the Lurgan-Derrytrasna Road with the Columbkille-Maghery Road and saved the traveller at least 12 miles of a detour. The proposed bridge would have been a permanent link between Lurgan and Charlestown in Oneiland West and the Manor of Richmond and Stewartstown in Oneiland West. It is claimed he intentionally erected it equidistant (seven miles) each from Portadown, Lurgan and Stewartstown.[3] 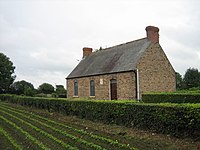 The Grant Jury approved the plan for the bridge as well as the proposed toll charges but the bridge was never constructed. The Canal Company objected as they felt the presence of the bridge would restrict the amount and scope of the future boat traffic in Lough Neagh, the River Bann and Newry Canal. Their success in opposing the bridge was a brief victory though: the railways arrived in 1841 and superseded much of the business on the canal in any case.

The plan for the bridge was so far advanced that the tolls for crossing were already agreed. A coach drawn by 6 horses would cost 1s 6d, a carriage and one horse would be 0s 3d and one man, woman or child would be charged a halfpenny[4]

The main road along the south shore of Lough Neagh still heads hopefully to this spot, stops, and resumes on the other side with nothing to join its severed path.

The ferry and new bridge plans

A ferry was operated by the Wilson family for most of the 20th Century but it no longer exists and a bridge has never been constructed across the river.

There have been calls for a bicycle and pedestrian bridge as a means of boosting tourism. It has not come to pass.[5] [6] [7]