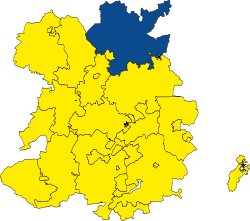 North Bradford Hundred is a hundred in Shropshire. It is situated in the north-east of the county, adjacent to the borders with Flintshire, Cheshire and Staffordshire. It had a population of 49,213 in 2011. Along with South Bradford it is often considered a single hundred, although the two were counted separately in the first census returns.

*: Extends into Staffordshire.
†: Besford and part of Preston Brockhurst in Pimhill; Acton Reynold in Shrewsbury.
‡: In Pimhill.
§: In Cheshire.