Prees is a village in north Shropshire, near the border of Flintshire. Its name is Welsh and means "brushwood".

Prees is northeast of the small town of Wem. It is also west of Market Drayton and south of Whitchurch. A number of nearby villages share the name Prees: Prees Village, Prees Green, Prees Heath and Prees Wood. All were formerly known as Prys - Wood or Prys, etc. The population in 2001 was recorded at 2,688.

The church in the village dates back to the 14th century, however the tower is younger.

The A41 and A49 roads pass on either side of the village.

Persons associated with Prees include Captain Black, whose manor is located near the war memorial, and Rowland Hill, 1st Viscount Hill, whose Doric column stands in Shrewsbury.

Also located in Prees is the Prees Church of England Primary School and Nursery, a Victorian building that holds much history. 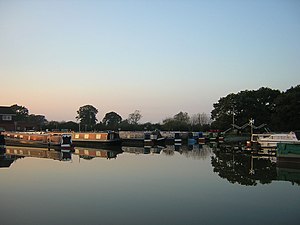 Prees was the intended destination of an arm of the Ellesmere Canal. However the arm was only completed as far as Quina Brook. The arm is now known as the Prees Branch of the Llangollen Canal; it is navigable for about a mile to Whixall Marina and the following ¾ mile can be followed on the towpath as it passes through Prees Branch Canal Nature Reserve.[1]