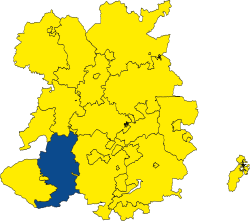 Purslow Hundred is a hundred in Shropshire, named after the village of Purslow, which it contains. It is situated in the south-west of the county, adjacent to the borders with Herefordshire, Montgomeryshire and Radnorshire. It had a population of 6,449 in 2011.