From Wikishire
Jump to: navigation, search
This is about the castle in Newport, Monmouthshire, another Newport Castle is located in Newport, Pembrokeshire.

Newport Castle is a ruined castle in Newport, Monmouthshire. It was built in the 14th century, probably by Hugh de Audley, 1st Earl of Gloucester or his son-in-law, Ralph, Earl of Stafford, with the purpose of managing the crossing of the River Usk. The castle was used as administrative offices for the collection of rent and dues from local tenants, and was also a residence and a garrison. In 1402 it was sacked by Owain Glyndŵr. It was in disrepair by 1522, and was taken by Oliver Cromwell's forces during the Civil War. Its use declined further in later centuries. It has been a Grade II* Listed building since 1951.

The castle is in the heart of the city between the Newport Bridge[1][2] and the neighbouring railway bridge, on the west bank of the River Usk.[1][3] It is adjacent to the A4042 road,[4] at the Old Green interchange.[3] 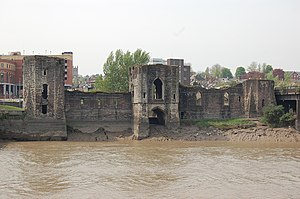 Newport Castle from the east bank. Note the watergate in the centre tower.

The castle was built of Old Red Sandstone and local grey limestone.[5] Originally, it was surrounded by a moat, within a "rectangular walled court". Trett said that "in its heyday it would have dominated the town and the river crossing."[6] It had three tall towers, a large rectangular central tower and two two-storey polygonal end towers, which connected by straight walls. Its form is based upon the line of the river bank on which it is located. A vaulted audience chamber sat above a watergate[1][4][6] — "a fortified gate... for use of people and supplies arriving by boat".[7] Above the watergate were turrets.[4]

Within the castle were a great hall, kitchen, a gallery, chambers and, after the 15th century works by Humphrey Stafford, "a series of luxurious" apartments, those used by the lord being in the south tower.[4][5][6] Architectural historian John Newman states that the most remarkable feature is the T-shaped room in the central tower above the watergate, which "must have provided a remarkable ceremonial setting."[5]

Images of the castle are found in a town map of 1750. A plan of the castle itself was published in Archaeologia Cambrensis in 1885.[6][8] Newman has a detailed description of the architecture, and a plan.[5]

The castle site included land between the railway station and the river. Construction projects, including a railway, railway bridge and a later inner ring road, resulted in modifications to the site, including destruction of "most of the inner bailey" and the removal of the moat.[5][9] The courtyard no longer remains, and at its height, the castle was a "river oriented" castle with no special fortification on the roadside portion of the walled court.[10] Now, only the east side of the castle remains.[4]

The first castle at Newport was a Norman motte possibly built by William Rufus around 1075.[5][11] Its exact location is uncertain,[6] but a common theory is that it was built at Stow Hill close to St Woolos Church, about ½ mile south-west of the later castle.[4][10][12]

In 1910, James Matthews, author of Historic Newport, wrote that the first mention of a castle in Newport was in 1126. William, Earl of Gloucester had a garrison established at the castle in 1171, but the following year the castle was destroyed by Iorwerth.[13] According to Trett, "It is recorded in the Welsh Brut y Tywysogion that in about 1172 King Henry II visited Castell Newyd ar Uysc (New Castle on the River Usk). In 1185 the king’s accounts show that six pounds fourteen shillings and sixpence were spent on repairs to the castle of Novi Burgi (i.e. Newport) and its buildings and bridge."[6] The castle was restored in 1249 by Henry III, and it was held in 1265 by the Earl of Leicester. That same year, Prince Edward occupied the castle, and in 1295, when he was the king, he ordered improvements and repairs. It was ceded to Hugh le Despenser, 1st Earl of Winchester in 1320 and two years later Roger Mortimer, 1st Earl of March attacked the castle, took its furnishings and set it on fire.[13] Three hundred trees were needed for reconstruction.[6][14]

The scanty remains of the Norman castle were probably buried by spoil from a railway tunnel dug in 1846.[5] 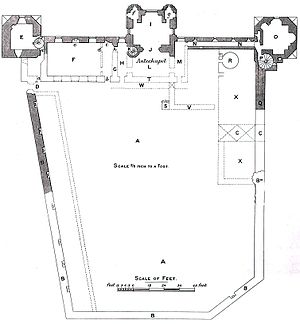 Ground plan of Newport Castle, showing the portions surviving in 1858. From Archaeologia Cambrensis, 1885

The second castle at Newport, commonly known as Newport Castle, was built in the 14th century,[10][15] possibly by Hugh de Audley, 1st Earl of Gloucester,[4][nb 1] after de Audley took control of Despenser's lands in 1326,[10] or, more probably,[5] by his son-in-law and successor Ralph, Earl of Stafford.[10][nb 2] Historians, such as Jeremy Knight, believe it was built between 1327 and 1386. A coin made during Edward III's reign (1327–1377) was found during an 1845 excavation of the site.[6] It had an "imposing position" above the river and controlled the river crossing and trade upstream.[5][9] At that time Newport became the centre of the lordship of Wentlooge.[4]

The castle was first documented in 1405, when it was repaired after being sacked in 1402 in the rebellion by Owain Glyndŵr.[13][15] Around 1435 further work was undertaken by Humphrey Stafford, Lord of Newport.[5] Owen Tudor was held prisoner within the castle in 1460.[13] It was primarily the lordship's administrative centre,[4][6] an adjunct to their main estate for collecting local tenants' dues and rent.[16] It was rarely used as the lord's residence.[1] 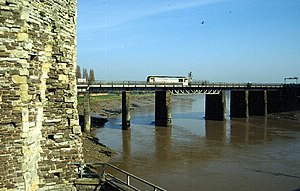 In the 19th century, the buildings within the ruin were used as a tannery and later as a brewery.[4][5] The hall's traceried windows were destroyed in that century, and the brewery was destroyed by a fire in 1883. In 1891, the south tower came into the ownership of the Corporation, and the rest of the castle was bought by Lord Tredegar in 1899. The Office of Works became the guardian of the castle between 1930 and 1950, at which time there was a refurbishment of the stonework.[5] 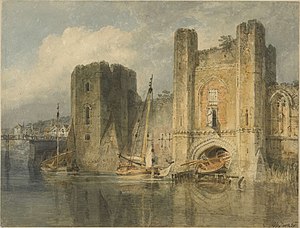 The castle was the inspiration for the 1911 poem "Days That Have Been" by Newport-born W. H. Davies.[20]

Days That Have Been
Can I forget the sweet days that have been,
When poetry first began to warm my blood;
When from the hills of Gwent I saw the earth
Burned into two by Severn's silver flood:

When I would go alone at night to see
The moonlight, like a big white butterfly,
Dreaming on that old castle near Caerleon,
While at its side the Usk went softly by: