New Malden is a town in Surrey, within the metropolitan conurbation. It is a local shopping centre. Nearby towns are Worcester Park, Wimbledon, Kingston upon Thames and Surbiton

New Malden was established entirely as a result of the arrival of the railway when Coombe for Malden railway station was opened on 1 December 1846 on the main line from Waterloo. However, when Queen Victoria visited distinguished residents in the Coombe Hill area, the royal train always continued to Norbiton station where the platform was at ground level.

Building started slowly in the area north of the station, gathering pace in the late nineteenth and early twentieth centuries with two- and three-bedroom terraced houses. Further out are larger detached and semi-detached houses from the 1930s. The road up the hill to Coombe, Traps Lane, is thought to derive from a farm owned by a Mrs Trap.

Two miles to the south is the former village of Old Malden from which New Malden gets its name. Old Malden, once simply Malden has origins in Anglo-Saxon times, the name being Old English Mael dun: "cross hill".

At the end of the high street there is a roundabout known as the Fountain Roundabout because it has a fountain which was originally used for drinking water by horses. The Fountain Roundabout has The Fountain Public House on one corner. From the roundabout are four exits; one to the high street, one to Kingston upon Thames, and two others which go to the main A3 London to Portsmouth Road which has been the main route from the south of England docks to Central London for several hundred years.

New Malden is bounded to the north by the affluent Coombe Hill and to the south and east by Raynes Park, Worcester Park and Tolworth. New Malden includes Motspur Park, home to the training ground of Fulham Football Club.

The busy A3 trunk road runs through part of New Malden. A minor tributary of the River Thames, Beverley Brook, flows through the east of the town, while its western boundary is along the Hogsmill, another Thames tributary.

The first parking meters were made in New Malden at Venners Ltd.

New Malden has the largest expatriate community of South Koreans in Europe, and is one of the most densely populated area of Koreans outside Korea. According to different sources, the Korean population in the town and its area is around 20,000. In the 2001 census, some small areas of New Malden had "Other Asian" of "over 25%", though no whole ward reached over 20%. New Malden functions as the shopping and cultural centre for a Korean population spread more widely across South-West London and the neighbouring counties. The area has around fifteen Korean cafés and restaurants, and many small supermarkets and other shops. The Anglo-Korean Cultural Institute can be found on Burlington Road, and churches of several denominations in the area have regular Korean services with associated Korean clergy.

The size of this community has been attributed[1] to the former residence of the South Korean ambassador in Lord Chancellor's Walk off Coombe Lane West. During the 1970s many Koreans came to the area following his example, but when house prices rose in Wimbledon, they moved to New Malden. Others point to a joint-venture between what was then Decca, later Racal Avionics, now part of Thales Group, at Shannon Corner and a Korean chaebol in the 1950s as the start of the community. Samsung Electronics' British division used to be based in New Malden, although it has now relocated its European headquarters to nearby Chertsey. A high proportion of the community are expatriate workers for Korean companies, who remain in Britain for a number of years before returning to Korea. 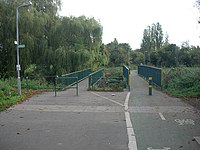 Bridges over the Hogsmill River