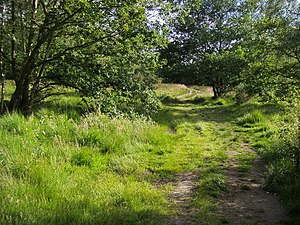 In 1864, the lord of the manor, John Spencer, 5th Earl Spencer, who owned Wimbledon manor, attempted to get a private parliamentary bill[3] to enclose the Common for the creation of a new park with a house and gardens and to sell part for building. In a landmark decision for English common land, and following an enquiry, permission was refused and a board of conservators was established in 1871[4][5] to take ownership of the common and preserve it in its natural condition.

Wimbledon Common, together with Putney Heath and Putney Lower Common, are still today protected by the Wimbledon and Putney Commons Act of 1871 from being enclosed or built upon. The common is for the benefit of the general public for informal recreation, and for the preservation of natural flora and fauna. It is the largest expanse of heathland in the London area. There is an area of bog with unique flora. The western slopes, which lie on London clay, support mature mixed woodland. 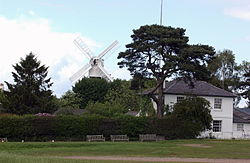 The windmill on the common

The Commons are administered by eight Conservators. Five of them are elected triennially and the remaining three are appointed by three government departments: Environment, Defence and Home Office. The Commons are managed by the Clerk and Ranger, supported by a Deputy, a Wildlife & Conservation Officer and a personal assistant. There are seven Mounted Keepers (who deal with public safety and security), two groundsmen (for the playing fields), six maintenance workers and one property maintenance worker – some 23 employees in total.[1] There are at least four horses which are used by the Keepers on mounted patrol.

The Conservators are responsible for the annual budget of around £1m. Most of the revenue comes from an annual levy on houses within ¾ mile of the Commons, and the levy payers are entitled to vote for the five elected Conservators. 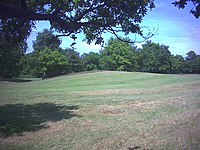 A windmill stands near the centre of Wimbledon Common as usually understood: the unmarked parish boundary with Putney Common runs right past it.

In the 19th century the windmill was the headquarters of the National Rifle Association and drew large crowds each July. "These annual gatherings are attended by the élite of fashion, and always include a large number of ladies, who generally evince the greatest interest in the target practice of the various competitors, whether it be for the honour of carrying off the Elcho Shield, the Queen's or the Prince of Wales's Prize, or the shield shot for by our great Public Schools, or the Annual Rifle Match between the Houses of Lords and Commons."[6] Eventually the headquarters were moved to ranges at Bisley.

Two broad, shallow pools, Kingsmere and Rushmere, lie near roads on the higher parts of Wimbledon Common and seem to be the result of gravel extraction. The more remote Queensmere is somewhat deeper, being impounded in a small valley.

Beverley Brook runs along the western edge of Wimbledon Common.

At the southern end of the common on the part used by the Royal Wimbledon Golf Club, but with a public footpath running through the middle, are the remains of an Iron Age hill fort known (in fact only since the 19th century) as Caesar's Camp. Though the main period of use as an oppidum seems to have been the 6th to 4th centuries BC, there is some evidence that it was indeed stormed by the Romans, probably in the Invasion of Britain by Claudius. It may have been taken by the Legio II Augusta under Vespasian in their push westwards in AD 44. It is possible the site was settled as far back as the Bronze Age, but it and the surrounding barrows have been badly damaged.[7] 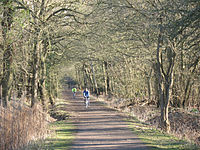 The Horse Ride on the western side of Wimbledon Common

Putney Heath is around 395 acres in size and sits at approximately 148 feet above sea level.

Thomas Cromwell, 1st Earl of Essex, was born on the north side of the heath circa 1485. From a blacksmith's son he rose to be chief minister to King Henry VIII, a perilous position as he was to find eventually. In the 19th century his birthplace was still a place of note. "The site of Cromwell's birthplace is still pointed out by tradition, and is in some measure confirmed by the survey of Wimbledon Manor... for it describes on that spot 'an ancient cottage called the smith's shop, lying west of the highway from Richmond to Wandsworth, being the sign of the Anchor.' The plot of ground here referred to is now covered by the Green Man public house."[6]

King Charles II reviewed his forces on Putney Heath in 1684; in May 1767, George III reviewed the Guards, and the Surrey Volunteers at the same spot in 1799.[8] The 300th anniversary of the Queen's Royal Surrey Regiment was marked in 1961 when a tercentary monument was unveiled and blessed on the heath.[9] According to Samuel Pepys, Charles II and his brother, the Duke of York used to run horses on the heath.

A stone and brick obelisk was erected on Putney Heath in 1770, marking the 110th anniversary of the Great Fire of London, and to celebrate the invention of the Hartley fire plates by David Hartley, near a spot where his fireproof house was built. The lower part of this house was repeatedly set on fire in the presence, among others, of George III and Queen Charlotte, the members of Parliament, the Lord Mayor, and the Aldermen.[10] Since 1955 the obelisk has been a Grade II listed building.[11] The adjacent Wildcroft Manor was formerly in the ownership of publishing magnate George Newnes, builder of Putney Library. In 1895 he was created a baronet "of Wildcroft, in the parish of Putney".

Many duels were undertaken on Putney Heath. In May 1652, George, the third Lord Chandos, and Colonel Henry Compton fought with Compton being killed in the encounter. On a Sunday afternoon in May 1798 William Pitt, the then Prime Minister, who lived in Bowling-Green House on the heath, fought a bloodless battle with William Tierney, MP. Bowling-Green House derived its name from the bowling-green formerly attached to it, and for more than sixty years (1690–1750) was the most famous green in the neighbourhood of London. "In the early days of George III's reign it was celebrated for its public breakfasts and evening assemblies during the summer season. It was occupied for some time by Archbishop Cornwallis previous to Pitt taking up his residence there. During Pitt's ownership the house had large rooms for public breakfasts and assemblies, was a fashionable place of entertainment". Nearly a century earlier the property was noted for "deep play".[6] Pitt died in the house in 1806 from typhus. It was later owned by Henry Lewis Doulton, son of Henry Doulton of pottery fame. It was demolished and an art deco style residence rebuilt on the site in 1933. Nearby stands Bristol House and owes its name to the Bristol family. James Macpherson, the author of the Ossian's Poems, had a villa on Putney Heath.[6]

The heath near the Telegraph pub was also the venue for the scandalous duel fought in September 1809 between Cabinet ministers George Canning and Lord Castlereagh.[12]

Scio House was the last villa on Portsmouth Road abutting the heath: it eventually became a hospital and was known as Scio House Hospital for Officers, Putney.[13] It has since been redveloped as a gated community of 70 neo-Georgian homes divided between two streets.[14]

Because of its elevation, from 1796 to 1816 Putney Heath hosted a station in the shutter telegraph chain, which connected the Admiralty in London to its naval ships in Portsmouth. This was replaced by a semaphore station, which was part of a semaphore line that operated between 1822 and 1847.[15]

The wilderness was for many years a noted rendezvous for highwaymen. In 1795, the notorious highwayman Jeremiah Abershaw – also known as Jerry Avershaw – was caught in the pub on the northside of the heath where Putney Hill meets Tibbet's Ride. After execution at Kennington Abershaw's body was hung in a chain gibbet on the heath, as a warning to others.[16] The location on the heath is known as Jerry's Hill. The inn was later knocked down and became a factory.

With the development of transport routes for the growing financial sector, Putney Heath became highly desirable for City gentlemen in the 1890s and they were initially known as "outsiders".[17] Dover House was owned at the turn of the 20th century by the famous US financier JP Morgan.[18] Social researcher Charles Booth classified the whole area of Putney Hill and West Hill, leading into Putney Heath, as wealthy or well-to-do. Despite a full array of places of worship, he said the area was noted for low church attendance with all denominations "struggling for the souls of pleasure-seeking Putney... the middle class here are as indifferent as the poor elsewhere."

The village green at the corner of Wildcroft and Telegraph roads is still used by Roehampton Cricket Club and is one of the oldest continuously playing cricket team, established in 1842. The club has played there continuously since 1859 when lord of the manor, Earl Spencer, suggested it as a new site.[19]

The Richardson Evans Memorial Playing Fields, which form part of the Commons and are situated in Kingston Vale, provide football and rugby pitches for local schools and clubs. The grounds are currently home to London Cornish RFC, and was the training ground for Harlequins Rugby League. It also hosts the annual National Schools Sevens rugby tournament. The grounds can also accommodate many different sports such as Australian Rules Football.

Today, as well as being a fine place for cycling, jogging and walking, the Common is home to The Wimbledon Common Golf Club and London Scottish Golf Club. The first University Golf Match was played on Wimbledon Common in 1878, courtesy of the LSGC. It also is the base for Thames Hare and Hounds, the oldest cross country running club in the world. Annually Thames Hare and Hounds host the 1st team (Blues) Varsity cross-country match between Oxford and Cambridge Universities.

The Commons also provide some 16 miles of horse rides.

The Wimbledon and Putney Commons Act 1871 contains a provision to allow the Conservators to have Officers attested as constables[20] for the purposes of enforcing the provisions of the Act and all byelaws made there under.

There was resistance at the time to a similar provision in the draft Bill that preceded the Act, whereby an article in The Spectator in January 1865 objected to the creation of 'Spencerian Police'.[21] The article refers to draft Bill as it was published in draft in 1864, whereby the article suggests that the Bill contained a provision for the appointment of Special Constables with full police powers. It would seem that this provision was removed in favour of the provision that allowed the attestation of constables just for the purposes of enforcing the Act itself and the byelaws made there under.

In addition to the ability to swear in constables, the Act creates a power of arrest for any officer of the Conservators or a constable when the details of a person suspected of committing a byelaws offences cannot be obtained (e.g. details refused or suspected of being false).[22] Whilst it is unlikely that this power would be used by anyone other than a Keeper in modern times, a theoretical power of arrest exists for any staff and for any member or the public that they call upon for assistance.

The historic role of the Keeper was captured in a 1959 British Pathé film, which showed them dressed in bowler hats and tweeds being inspected by the Warden (a former Lieutenant Colonel) before going about their daily routine of tackling summer fires, challenging golfers that were not in appropriate attire and telling off school boys.[23]

The common has several statutory protecctions, apart from the specific protection of its own Act of Parliament Designations affecting all or part of the commons include:

English Nature work with the Conservators on the management plan for the area. Wimbledon Common and Putney Heath are also a