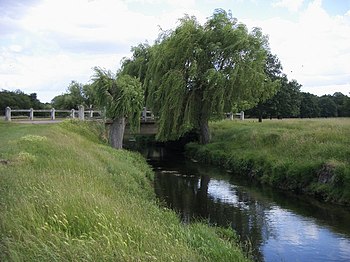 The Beverley Brook in Richmond Park

Beverley Brook is a minor Surrey river, within the urban sprawl of the northeast of the county, about 9 miles long. It rises at Cuddington Recreation Park in Worcester Park, flows through Motspur Park, New Malden, Wimbledon Common, Richmond Park and Barnes. It then joins the River Thames near Putney Bridge at Barn Elms.[1]

The name is derived from "beaver", indicate that beavers once dwelt in the brook,[2] though they have been extinct in Britain since the sixteenth century.[3]

A tributary stream, the Pyl Brook, flows through Lower Morden to join it at Beverley Park in New Malden.[1] Both brooks are on the Environment Agency's watch list of rivers susceptible to flooding.

For much of the twentieth century Beverley Brook was fed by poorly treated sewage from a sewage works in Green Lane, Worcester Park. Since the introduction of improved treatment methods in 1998, the range of wildlife species in the river has steadily increased.[1]

On, for example, Wimbledon Common, Beverley Brook has banks reinforced with wooden ‘toe-boarding’, which prevents use by water voles.[4]

The anthropomorphic personification of the river appears as one of the daughters of Mama Thames in the novel Rivers of London.