Bearsden is a town in Dunbartonshire, sitting on the north-western fringe of Greater Glasgow, approximately six miles from the city centre, and is effectively a suburb, with housing development coinciding with the introduction of a railway line in 1863, and from where the town gets its name (Bearsden station was named after a nearby house).

Bearsden was ranked the 7th-wealthiest area in Britain in a 2005 survey, and has the least social housing of any town in the region.

The Roman Antonine Wall runs through the town and the remains of a military Bath House can be seen near the town centre. In 1649, the first New Kilpatrick parish church was built, and became the centre of administration for the area. By the early 20th century, a town had grown up with large town houses, primarily occupied by wealthy commuter businesspeople.

Further development of more affordable housing has increased the population of the town to approximately 28,000 and the town remains affluent.

Bearsden was first known as Kirktoun(e) or New (or Easter) Kilpatrick village, all of which relate to the parish church in the centre of the town. There is no evidence that the village itself (rather than the parish) was ever called "New Kilpatrick" by locals. By the mid 19th century the houses near to the church had come to be called New Kirk).[1] Nevertheless, the name appears over the village on old maps. The records of the Parliament of Scotland prior to the Acts of Union 1707 use the names Easter Kirkpatrick and Eister Kilpatrick for the parish.[2][3]

The current name Bearsden originated from Bearsden railway station built in 1863, which was named from a house near the station site (to avoid confusion with Old Kilpatrick station).[1]) The origin of the house name is unresolved and suggestions include:

As James McCardel pointed out in his book The Parish of New Kilpatrick "the wisest course is frankly to admit that the derivation [of the name of Bearsden] is unknown".[1]

The first known settlement on the site of present-day Bearsden was a 2.5 acre Roman fort in the second century AD. Between AD 142 and 144, under Emperor Antoninus Pius, the Romans built a stone and turf fortification, called the Antonine Wall, between the Firth of Clyde and the Firth of Forth. They also built the Military Way, a road that ran parallel to the south of the wall. They built the aforementioned fort at the intersection of the Military Way, and the north-south road from Glasgow to Loch Lomond. In AD 164, after only 20 years, the Romans withdrew to Hadrian's Wall.

Little of the fort remains to be seen today. However, close to the fort was a Roman bath-house, built in approximately AD 142–143. The bath-house's remains were discovered by builders digging foundations for a housing development in 1973. The site was donated to the government, and today the remains lie well-preserved 150 metres from the town centre.[4]

Two further stretches of the Antonine Wall's stone base can be seen in the New Kilpatrick cemetery on Boclair Road.[5] 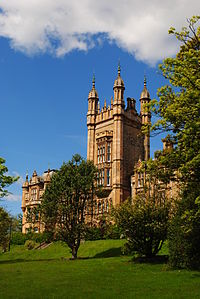 Prior to 1649, the area formed part of a larger parish called Kilpatrick. One part was called West, or Old Kilpatrick, and covered Dumbarton and areas of west Dunbartonshire, such as Clydebank. The remaining part was named East or New Kilpatrick, covering a much greater area than Bearsden, from the River Clyde at Whiteinch and Yoker to Duntocher, Strathblane and Baldernock. Modern Bearsden began in an agricultural area as a small hamlet called New Kirk (or perhaps Chapelton) close to New Kilpatrick Parish Church, which was first built in 1649. Close landmarks included Canniesburn Toll, and a water mill at Garscube. The present-day church was built in 1807.[1]

The New Kirk settlement grew in the middle of the nineteenth century when Glaswegian businessmen built houses at a commutable distance from the city. In 1863, the Glasgow and Milngavie Junction Railway opened, with a station near New Kirk called Bearsden. This was soon adopted as the name of the community. The opening of the railway led to considerable development of Bearsden, with many large Victorian houses built in what is now known as Old Bearsden Conservation Area.

The Glasgow Reformatory for Girls at East Chapelton (also known as East Chapelton Home and Hillfoot Residential School)[6] moved from Rottenrow to Bearsden in the late 1860s. Managed by Glasgow Corporation, the countryside location moved the girls away from any malign influences to be found in the city and allowed the institution to be self-supporting with livestock and a vegetable garden. The girls washed their own clothes and those of local residents in the Reformatory's large laundry. In addition to girls who had fallen foul of the courts, others with problems such as malnourishment and learning difficulties were also housed at Chapelton.[7] In 1949, around 360 girls passed through the school annually and were taken to New Kilpatrick Parish church on Sundays.[1] The school closed in the early 1970s and after a brief period as a hall of residence for the Glasgow College of Nautical Studies, the building was demolished to make way for a shopping centre with a supermarket.[8]

Buchanan Retreat was built in 1890 by the Buchanan sisters of Bellfield, near Kilmarnock, in Ayrshire. It was taken over by Bearsden Burgh in 1962 and used as council offices (pictured below under Administration). Latterly used by East Dunbartonshire council, and now known as Boclair House, it was placed on the market in 2012 following council cost-cutting measures and staff redistribution.[9][10] The council is currently considering an offer (April 2013) to convert the building into a hotel and wedding venue.[11] The Schaw Home (pictured) was built in 1895 by Miss Marjory Shanks Schaw in memory of her brother and gifted to Glasgow Royal Infirmary. The building has now been split into private residential apartments.[12]

In 1906, many buildings were built at Bearsden Cross by Mathew Henderson (he also tried, unsuccessfully, to develop another commuter suburb at Drumchapel). Westerton Garden suburb was built around 1913 and is also now a conservation area near Westerton station. Near this is the site of the former Canniesburn Hospital, which has many Art Deco buildings and where pioneering plastic surgery was performed. The hospital site has now been developed into flats, but much of the character has been retained and copied. A further station in Bearsden is at Hillfoot.

Bearsden continued to expand in the twentieth century as residents built large independently designed villas, estates of bungalows, and other types of houses. Few sites are now left unoccupied.

In 1958, Bearsden was large enough that it was created a burgh.

Arms of the Burgh 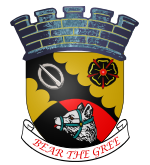 The Lord Lyon King of Arms granted a Coat of Arms to the Burgh of Bearsden on 29 June 1959. Since 1975, details have been incorporated into the arms of subsequent local administrative bodies The arms feature:

The motto on the Bearsden coat of arms is "Bear the Gree" (a phrase occurring frequently in Scots literature from about 1420, including in Robert Burns' A Man's a Man for A' That) which means 'to hold or win first place'. 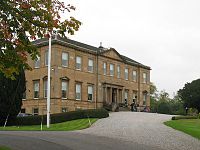