The National Library of Wales is found in Aberystwyth in Cardiganshire. It is the biggest library in Wales, holding over 6.5 million books and periodicals, and the largest collections of archives, portraits, maps and photographic images in Wales. The Library is also home to the national collection of Welsh manuscripts, the National Screen and Sound Archive of Wales, and the most comprehensive collection of paintings and topographical prints in Wales. It is the primary research library and archive in Wales[1] and one of the largest research libraries in the United Kingdom.

At the very core of the Library is the mission to collect and preserve materials related to Wales and Welsh life and those which can be utilised by the people of Wales for study and research.[2] Welsh is the Library's official main medium of communication but it does, however, aim to deliver all public services in Welsh and English.

In 1873, a committee was set up to collect Welsh material and house it at University College, Aberystwyth. In 1905, the government promised money in its budget to establish a National Library and a National Museum of Wales, and the Privy Council appointed a committee to decide on the location of the two institutions.[3] David Lloyd George, who later became Prime Minister, supported the effort to establish the National Library in Aberystwyth,[4] which was selected as the location of the library after a bitter fight with Cardiff, partly because a collection was already available in the College. Sir John Williams, physician and book collector, had also said he would present his collection (in particular, the Peniarth collection of manuscripts) to the library if it were established in Aberystwyth. He also eventually gave £20,000 to build and establish the library.

Cardiff was eventually selected as the location of the National Museum of Wales. Funds for both the National Library and the National Museum were contributed by the subscriptions of the working classes, which was unusual in the establishment of such institutions. In a Prefatory Note to A List of Subscribers to the Building Fund (1924), the first librarian, John Ballinger, estimates that there were almost 110,000 contributors.[4]

The Library and Museum were established by Royal Charter on 19 March 1907.[3][5] The Charter stipulated that if the National Library of Wales should be removed from Aberystwyth then the manuscripts donated by Sir John Williams will become the property of the University College.[4] A new Royal Charter was granted in 2006.

The first use of the Library of Congress Classification by a library in Britain was at the National Library of Wales in 1913.[8] 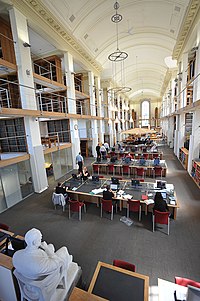 On 15 July 1911 King George V and Queen Mary laid the foundation stone of the National Library of Wales.[9] Designed by architect Sidney Greenslade, who won the competition to design the building in 1909, the building at Grogythan,[10] off Penglais Hill, was ready for occupation in August 1915 but the task of transferring the collections was not completed until 1 March 1916, St David's Day.[4]

The central block, or corps de logis, was added by Charles Holden to a modified version of Greenslade's design. It was completed in 1937 and is a Grade II* listed building.[9][11]

The landscaped grounds of the National Library of Wales are also Grade II listed, and are seen as a significant part of the historical landscape:[12] the landscaping both supports and playing a key part of the overall architectural design of the library building.

The Library is faced with Portland stone on the upper storeys which contrasts with the Cornish granite below it.[2] Restoration work was necessary in 1969 and 1983 due to the effects of weathering on the Portland stone.[13] In recent years many changes have been made to the front part of the building.

The large North Reading Room, where printed books are consulted, has "the proportions of a Gothic Cathedral", being 175 feet long, 47 feet wide and 33 feet high. There are galleries at three levels above the floor. The feasibility of installing a mezzanine floor to make better use of the space has been considered on two occasions. The South Reading Room is used for consulting archives, manuscripts, maps and other printed materials. Carved above the entrance is the room's original name the Print and Maps Room. Above it on the second floor of the south wing is the Gregynog Gallery where temporary and permanent exhibitions display the treasures of the Library's collections.[13]

A six-storey bookstack, which was completed in 1931, was built to increase storage space for the rapidly expanding book collection.[9] A second bookstack was officially opened in March 1982.[9] In 1996, the Third Library Building was opened, doubling the storage capacity of the Library.[9] The second phase of the building was built by T. Alun Evans (Aberystwyth) Ltd. 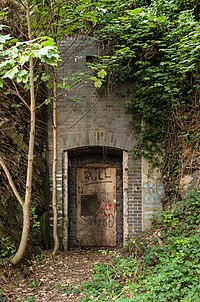 Entrance to the wartime storage tunnel

During the Second World War, many of Britain's most valuable artworks and manuscripts were stored in the National Library of Wales, which provided the evacuated treasures with a refuge from enemy bombing raids.[4][16] The architect Charles Holden was instructed to design a tunnel for this purpose in the outcrop of rock close to the main building, with the British Museum sharing in the costs that this incurred. The tunnel was heated and ventilated to ensure the preservation of vellum, papyri and paper during its use from 18 July 1940 until 23 May 1945. In addition to an extensive consignment from the British Museum,[4] which weighed over one hundred tons,[17] the Library received forty-six boxes of manuscript and printed books from Corpus Christi College, Cambridge and over a thousand pictures, eighty-two boxes of books and twenty members of staff from the National Gallery]].[4] The Library also received irreplaceable items from other prestigious institutions such as the Ashmolean Museum in Oxford, Dulwich College and the Royal Society.[18]

A number of distinguished scholars from the British Museum accompanied the collections to Aberystwyth.[4] Their senior member of staff was Deputy Keeper of Printed Books, Victor Scholderer, who responded to a letter from the Director, Sir John Forsdyke, by insisting that he and his colleagues would continue to sleep in the Library so that the tunnel could be checked during the night to ensure that the air conditioning was functioning properly.[17] Scholderer, an expert on incunabula, produced A Handlist of Incunabula in the National Library of Wales in gratitude to the hospitality that was afforded to them by the Library.[4] Likewise, Arthur E. Popham, Keeper of Prints and Drawings, dedicated The Drawings of Leonardo da Vinci ″To the Librarian and staff of the National Library of Wales″.[4][18] Several other institutions donated funds to the Library as an expression of their gratitude[18] and Mrs. David Sassoon, London presented two works by Cicero that were printed at Venice in the fifteenth century.

The artefacts that spent Second First World Warn the care of the National Library include the Magna Carta,[16] drawings by Leonardo da Vinci,[16] paintings by Rembrandt, Rubens and Velásquez from Dulwich College,[4] letters of the kings and queens of England,[16] and autographs belonging to William Shakespeare.[16]

The collections of the National Library of Wales include over 6.5 million printed volumes, including the first book printed in Welsh, Yny lhyvyr hwnn (1546). In addition to the printed book collections, there are about 25,000 manuscripts in the holdings. The archival collections at the Library include the Welsh Political Archive[19] and National Screen and Sound Archive of Wales.[20] The Library also keeps maps, photographs,[21] paintings, topographical and landscape prints,[22] periodicals and newspapers.[23]

In 2010, the Peniarth Manuscript collection and The Life Story of David Lloyd George were amongst the first ten inscriptions on the UK Memory of the World Register, a UNESCO record of documentary heritage of cultural significance.

Collection development is focused on materials relating to the people of Wales, those in the Welsh language and resources for Celtic studies,[1] but other materials are collected for the purposes of education and literary and scientific research.[1]

As a legal deposit library, the National Library is entitled to request a copy of every work published in the United Kingdom and Ireland.[24][25] This has allowed the Library to collect modern Welsh, Irish and Gaelic language books for its Celtic collection. The acquisition of material through legal deposit has been supplemented by purchases, international exchanges, donations and bequests.[6]

The Celtic collection includes works in all six Celtic languages. A representative collection of Scottish Gaelic books has been assembled, primarily through purchase of earlier publications, guided by the standard bibliographies, and, for books published after 1911, by legal deposit. Irish literature, which is far more extensive, has been collected through a similar combination of purchase and deposit. However, many collections purchased by or donated to the Library have contained rare Irish books. The Library of Dr E. C. Quiggin, which was received in 1921, contained a large Irish collection and many early Breton books. Further Breton books have been purchased or were acquired in the libraries of Sir Edward Anwyl, Thomas Powel, Dr Thomas Gwynn Jones, Dr Paul Diverres and Llywarch Reynolds. The holdings of Cornish and Manx printed books include practically everything that has been published in those languages, with a few facsimiles.

The online catalogue of the National Library is available to search.

Between 1909 and 1984, the Library published Bibliotheca Celtica in fulfilment of the terms of its charter to keep a register of books printed in Welsh and other Celtic languages or relating to Wales and the Celtic nations. In 1985 Bibliotheca Celtica was merged with the Subject Index to Welsh Periodicals to form A Bibliography of Wales (Llyfryddiaeth Cymru). In 1987, the retrospective bibliography Libri Walliae: a catalogue of Welsh books and books printed in Wales 1546–1820 was published.[6]

Many of the most important manuscripts and books at the Library have been digitised and made freely available to view on the library's website in its "Digital Mirror".

In April 2012, the Library made a policy decision not to claim ownership of copyright in digital reproductions. This meant that the rights information attached to digital representations of works would reflect the copyright status of the original (which is to say, that originals in the public domain would remain in the public domain in their digital form). The Library has applied this policy to projects delivered since then (the Welsh Journals Online and Cymru1914) and is still in the process of updating rights information for its pre-2012 projects. Metadata are released into the public domain using the CC0 licence.

The 'Cynefin: Mapping Wales' Sense of Place' project has created a unified tithe map of Wales by digitising over a thousand tithe maps. Cynefin is a partnership between Archives Wales, the National Library of Wales and People’s Collection Wales that was launched in November 2014. A valuable online tool for historical research is being produced by crowdsourcing the contributions of volunteers through the Cynefin website to transcribe the apportionment documents and link them to the digitised tithe maps.

The Kyffin Williams Bequest Project was set up to catalogue and digitise the material that Kyffin Williams bequeathed to the National Library of Wales on his death in 2006. In addition to the collection of artwork, the bequest also included funds to cover this project. The cataloguing work began in 2008 and the digitisation started in 2009.

The National Library of Wales has digitised the back-numbers of 50 journals relating to Wales, in Welsh and English, in the Welsh Journals Online project funded by Jisc. It forms the largest body of Welsh text on the Web, and as well as allowing free access for all to scholarly articles on history, literature and science, and poems and book reviews. OCR of the page scans was undertaken to create TEI searchable text versions. The website contains a total of 400,000 pages. It is intended to add new issues of the titles as they emerge from the embargo period agreed with the publisher.[26]