The Library holds approximately 9 million items (including maps and sheet music) and, through legal deposit, purchase and donation it receives around 100,000 items every year. The University Library is unique among the legal deposit libraries in keeping a large proportion of its material on open access and in allowing some categories of reader to borrow from its collections.

The original location of the library was the Old Schools near the Senate House until it outgrew the space there and a new library building was constructed in the 1930s. The library took over the site of a former military hospital on the western side of Cambridge city centre, now between Robinson College and the Memorial Court of Clare College. The current building, designed by Giles Gilbert Scott, opened in 1934. 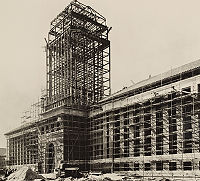 Construction of the main building in the 1930s

By the middle of the fourteenth century, the University of Cambridge owned a collection of books. These would have been kept in chests along with other valuables, rather than in a library building as would be recognised today.[3]

A common university library can be traced to the beginning of the 15th century, with the first direct reference to a 'library'. In March 1416 the will of William Loring was proved, which bequeathed three volumes to the library thus: "Item volo quod omnes libri mei juris civilis remaneant in communi libraria scolarium universitatis Cantebrigg' in perpetuum." In the second decade of the fifteenth century, the library found a home on the newly built Old Schools site.

The earliest catalogue is dated ca. 1424, at which time there were 122 volumes in the library.[4] The second earliest surviving catalogue was drawn up in 1473, and denotes 330 volumes. From the 16th century, the Library received generous donations or bequests of books and growth was considerably increased once the privilege of legal deposit had been granted.

The library's space was greatly extended with the building of the Cockerell Building on Senate House Passage in 1837–42.

Following an initiative by A. F. Scholfield (librarian from 1923 to 1949), it was decided to build a larger facility. The site selected comprised the eight-acre joint cricket field of King's and Clare Colleges. During the First World War, a large part of the site had been requisitioned by the War Office to create the 1st Eastern General Hospital, a facility for the Royal Army Medical Corps to treat military casualties.[5] The hospital had 1,700 beds at its height and treated some 70,000 casualties between 1914 and 1919.[6]

The new University Library building was designed by Giles Gilbert Scott, who also designed the neighbouring Clare Memorial Court (part of Clare College), and was constructed between 1931 and 1934. It is a Grade II listed building.[7] Inside are a number of 17th and 18th century bookcases including the ones designed for the old University Library by James Essex in 1731–34. The funds for the new library were raised by the colleges and private donors. The American philanthropist John D. Rockefeller provided the largest part of the funds for the library's construction. Sensing that it needed a grander entrance, Rockefeller persuaded the architect to add the distinctive front-facing tower.[8] The tower can be seen for several miles around Cambridge.[8]

The library has been extended several times through ground annexes and underground extensions which allowed for new legal deposit documents to be stored. The main building houses the Japanese and Chinese collections in the Aoi Pavilion, an extension donated by Tadao Aoi and opened in 1998.

The University Library has also built a large storage facility in Ely which has more than 62 miles of shelving for future legal deposit books and periodicals. Work on a £17.1 million off-site facility to house the growing collection finished in 2018 and provides Cambridge University with one of the largest library storage buildings in the world.[9]

As a legal deposit library, the University Library is entitled to claim without charge a copy of all books, journals, printed maps and music published in the United Kingdom and the Republic of Ireland. This has contributed to the library's large holdings of over seven million books and 1.5 million periodicals. Between 800 and 1,200 books a week are received through legal deposit.

From 6 April 2013, legal deposit also covers material published digitally and online, so that the Legal Deposit libraries can provide a national archive of the UK's non-print published material, such as websites, blogs and ejournals. Significant digitisation efforts continue as more manuscripts and early-modern books are acquired and scanned by the University of Cambridge.

The library is open to all members of the University of Cambridge. As is traditional among British university libraries, postgraduates and academics from other UK universities are allowed reference-only access to the library's collection, and members of the public may apply for access to use the Library for reference if their research requires access to materials held there. Students and academics from other libraries and institutions must submit a request to access prior to using the facilities in Cambridge.

The library is unique among the Britain's legal deposit libraries in keeping a large proportion of its books on open access and in allowing some categories of reader (for example Cambridge academics, postgraduates and undergraduates) to borrow from its collection. It has a Tea Room in which meals, snacks and beverages are available. The library regularly puts on exhibitions, free to the public, and featuring items from its collections.[10]

In 2002, the library began a special project termed Janus (after the Roman god of doorways) to provide a single point of networked access to catalogues of archives and manuscript collections held throughout Cambridge. This is a major development for the Cambridge Universities Libraries, especially because Cambridge is home to more than 100 libraries and research institutes, each with their own mandate and organisational structure. A widening number of participating repositories, both University and non-University, are working together to provide comprehensive coverage of archives in the city and surrounding area. Janus can be accessed by students and members of university both online and in-person.[11] 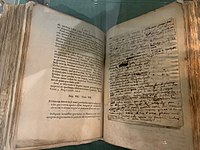 In June 2010, Cambridge University announced that a £1.5 million donation would allow them to start digitising some of the collections in the University Library and eventually provide access to them free of charge over the Internet via the Cambridge Digital Library website. Initially the project will focus on two collections called "The Foundations of Faith" and "The Foundations of Science", which includes writings by Isaac Newton and his contemporaries, as well as documents from the Library's archives of Christian, Jewish and Islamic texts.

Friends of the Cambridge University Library

The Friends of the Cambridge University Library was established by a group of individuals, organisations and private donors who are committed to supporting the growth and development of the library. Members of the Friends regularly raise funds for future construction projects and archival restoration efforts, as well as the acquisition and purchase of rare books or manuscripts. Membership in the group is open to all alumni and members of the public interested in the preservation of knowledge and literature. Special events and tours are organised to recognise the contribution of the membership. The Friends of the Cambridge University Library has raised more than £150,000 through regular and special donations over the past five years.[12]

Interior of the main reading room 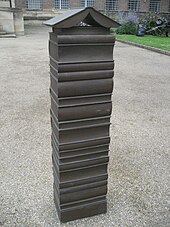 As part of its collection of more than 8,000,000 volumes, the library contains a wealth of printed and manuscript material from earlier times. This includes: