There are over 24 million items held at the Library in various formats including books, annotated manuscripts and first-drafts, postcards, photographs, and newspapers. The library is also home to Scotland's Moving Image Archive,[1] a collection of over 46,000 videos and films. Notable items amongst the collection include copies of the Gutenberg Bible, Charles Darwin's letter with which he submitted the manuscript of On the Origin of Species, the First Folio of Shakespeare, the Glenriddell Manuscripts, and the last letter written by Mary Queen of Scots. It has the largest collection of Scottish Gaelic material of any library in the world.

The library's main public building is in Edinburgh city centre on George IV Bridge, between the Old Town and the university quarter. This building is Category A listed.[2] Exhibitions are frequently held here, with past examples including 'Northern Lights: The Scottish Enlightenment' (21 June 2019 - 18 April 2020), a display which explored Scotland's contribution to the progress of Enlightenment,[3] and 'The International Style of Muriel Spark' (8 December 2017 - 13 May 2018), a celebration of her life and literary achievements.

As the library is a not a lending library, this building is one of several venues where the public are able to visit and consult primary materials in the reading rooms. There are two reading rooms in the George IV building, and a third Multimedia Room for consulting non-written materials:

There is also a more modern building, constructed in the 1980s, in a residential area on the south side of the town centre, on Causewayside. This was built to accommodate some of the specialist collections, such as maps and science collections, and to provide extra large-scale storage. There is one reading room located here also; the Maps Reading Room, purposed for visitors to consult maps, atlases, gazetteers, and cartographic reference books.

The newest addition to the National Library of Scotland is the 2016 Kelvin Hall public centre in Glasgow, purposed to provide access to the library's digital and moving collections, namely the Moving Image Archive.[4] Like at the library's main building, exhibits are held here too, though on a smaller scale.

Originally, the deposit library for Scotland was the Advocates Library belonging to the Faculty of Advocates. It was opened in 1689 and gained deposit library status in the 1710 Copyright Act, giving it the legal right to a copy of every book published in Great Britain. In the following centuries, the library added books and manuscripts to the collections by purchase as well as legal deposit, creating a privately funded national library in all but name.

By the 1920s, the upkeep of such a major collection was too much for a private body, and, with an endowment of £100,000 provided by Alexander Grant, managing director of McVitie & Price, the library's contents were presented to the nation. The new 'National Library of Scotland' was formally constituted by Act of Parliament in 1925. 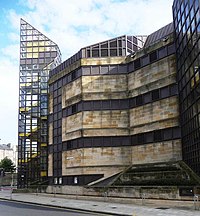 Grant's support was recognised with a baronetcy, and in June 1924 he became Sir Alexander Grant of Forres. In 1928 he donated a further £100,000 – making his combined donations the equivalent of around £6 million today – for a new library building to be constructed on George IV Bridge, replacing the Victorian-period Sheriff Court, which moved to the Royal Mile. Government funding was secured which matched Sir Alexander's donation. Work on the new building was started in 1938, interrupted by the Second World War, and completed in 1956. The architect was Reginald Fairlie; the architectural sculptor was Hew Lorimer. The coat of arms above the entrance was sculpted by Scott Sutherland and the roundels above the muses on the front facade by Elizabeth Dempster.[5]

By the 1970s, room for the ever-expanding collections was running out, and other premises were needed. The Causewayside Building opened in the south-side of Edinburgh in two phases, in 1989 and in 1995, at a total cost of almost £50 million, providing much-needed additional working space and storage facilities.

The library also holds many ancient family manuscripts including those of the Clan Sinclair, which date back as far as 1488.[6]

On 26 February 2009, areas of the building were flooded after a water main burst on the 12th floor. Firefighters were called and the leaking water was stopped within ten minutes. A number of items were lightly damaged.[7]

The last letter written by Mary Queen of Scots made a rare public appearance to mark the opening of a new library visitor centre in September 2009.

In September 2016 the library opened a new centre at the refurbished Kelvin Hall, Glasgow, in partnership with Glasgow City Council and the University of Glasgow, providing access to the library's digital and moving image collections.[8][4]