The Tees Newport Bridge is a vertical-lift bridge spanning the River Tees a short distance upriver from Tees Transporter Bridge, carrying the A1032 from Middlesbrough in the North Riding of Yorkshire across the river to County Durham. It stands (on the Yorkshire side) in Newport, a suburb of Middlesbrough. The bridge was completed in 1934.

It was built as a vertical lift bridge, of which the main span is lifted to enable the passage of ships beneath, and it operated as such for most of its lifetime. Since 1990 however it has been static.

The bridge was designed by Mott, Hay and Anderson and built by local company Dorman Long,[1] who have also been responsible for such structures as the Tyne Bridge and Sydney Harbour Bridge in Australia. The Tees Newport Bridge was the first large vertical-lift bridge in Britain.[2]

The bridge was inaugurated by Prince Albert, Duke of York (later King George VI) and opened to traffic on 28 February 1934.[3]

Constructed around twin 180 foot lifting towers, the 270-foot bridge span, weighing 2,700 tons, could be lifted by the use of two 325 H.P. electric motors at 52 feet per minute to a maximum height of 120 feet. In the event of motor failure a standby 450 H.P. petrol engine could be employed to move the bridge, but should both systems fail it was possible to raise or lower the span manually using a winch mechanism. It was estimated in 1963 by Mr R. Batty, long time Bridge Master at Newport Bridge, that "it would take 12 men eight hours" to complete the movement by hand.

Originally, 12 men would have been employed to man the bridge around the clock, usually requiring four to drive it at any one time. This was accomplished from the oak-panelled winding house situated midway along the bridge span. During the 1940s and early 1950s a lift would be carried out up to twice a day with an average of 800 vessels a year passing under it, but as the number of ships needing to sail up to Stockton-on-Tees declined, so did the use of the bridge lift. 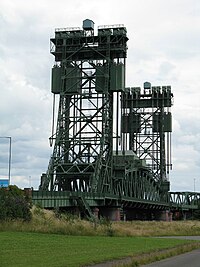 Tees Newport Bridge from the Durham side

The legal requirement to lift the bridge for shipping traffic was removed in 1989 after the repeal of the private Act of Parliament governing the bridge. Before mechanical decommissioning, Mr Ian MacDonald who worked on the bridge from 1966, finally as Bridge Master, supervised the final lift on 18 November 1990.

The Tees Newport Bridge still serves as a road bridge, carrying considerable traffic as a section of the A1032, despite the presence of the A19 Tees Viaduct a short distance upriver.

In recent years the bridge was repainted in its original green and some minor maintenance took place on the wire ropes and counterbalances which still take the majority of the bridge load.

Work started in July 2014 to paint the bridge red and silver to mark its 80th anniversary.[6] The work was originally planned to take 6 weeks, but was completed behind schedule and over-budget in October 2015. The main cause for the delay was that the bridge had not been maintained by Stockton Council for 15 years, and much of the steelwork was in a poor condition.