Cheddar is a large village in Somerset, nine miles north-west of Wells on the southern edge of the Mendip Hills, at the foot of the vast, dramatic Cheddar Gorge. This village is the first home of Cheddar cheese, which must be it greatest claim to international attention.

Cheddar Gorge, the foot of which is on the northern edge of the village, is the largest gorge in the United Kingdom and includes several show caves including Gough's Cave. The gorge contains signs of many ages of mankind, from the Neolithic to the modern age. It provides a unique geological and biological environment that has been recognised by the designation of several Sites of Special Scientific Interest.[1] It is also the site of several limestone quarry|quarries.

Apart from cheese and cider, Cheddar has been a centre for strawberry growing. The berry crop was formerly transported on the Cheddar Valley rail line, which closed in the late 1960s but is now a cycle path. The village is now a major tourist destination with several cultural and community facilities, including the Cheddar Show Caves Museum.[2]

The village supports a variety of community groups including religious, sporting and cultural organisations. Several of these are based on the site of The Kings of Wessex Academy, which is the largest educational establishment.

Another theory claims that the name means "Shear Water", from the Old English scear and Welsh dŵr.[4] The Old English 'dor' however ('door' or 'gateway') seems to match the landscape better.

Cheddar is listed in the Domesday Book of 1086 as Ceder.

There is evidence of occupation from the Neolithic period in Cheddar. Britain's oldest complete human skeleton, Cheddar Man, estimated to be 9,000 years old, was found in Cheddar Gorge in 1903.[5] Older remains from the Upper Late Palaeolithic era (12,000–13,000 years ago) have been found.[6] There is some evidence of a Bronze Age field system at the Batts Combe quarry site. There is also evidence of Bronze Age barrows at the mound in the Longwood valley, which if man-made it is likely to be a field system.[7] The remains of a Roman villa have been excavated in the grounds of the current vicarage.[8]

Reconstruction of the royal palace c. 1000

The village of Cheddar had been important during the Roman and Saxon eras. Cheddar Palace was a hall of the Kings of Wessex, which is recorded as used on three occasions in the 10th century to host the Witenagemot.[9] The ruins of the palace were excavated in the 1960s.[10] They are located on the grounds of The Kings of Wessex Academy, together with a 14th century chapel dedicated to St Columbanus.[11] Roman remains have also been uncovered at the site.[10][12]

Cheddar is listed in the Domesday Book of 1086 as Ceder.

As early as 1130 AD, the Cheddar Gorge was recognised as one of the "Four wonders of England". Historically, Cheddar's source of wealth was farming and cheese making for which it was famous as early as 1170 AD.[13]

The manor of Cheddar was deforested in 1337 and Bishop Ralph was granted a licence by the King to create a hunting forest.[14]

In the Victorian era it also became a centre for the production of clothing.[16] The last mill, used as a shirt factory, closed in the early 1950s.[15] William Wilberforce saw the poor conditions of the locals when he visited Cheddar in 1789. He inspired Hannah More in her work to improve the conditions of the Mendip miners and agricultural workers.[17] In 1801, 4,400 acres of common land were enclosed under the Inclosure Acts.[18]

The summer influx of visitors to the Cheddar gorge and caves began with the opening of the Cheddar Valley Railway in 1869.[19]

Cheddar, its surrounding villages and specifically the gorge has been subject to flooding. In the Great Flood of 1968 the flow of water washed large boulders down the gorge, washed away cars, and damaged the cafe and the entrance to Gough's Cave.[20][21] 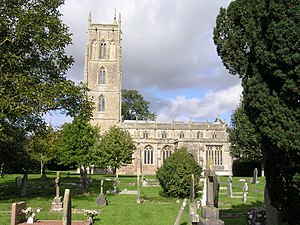 The parish church is St Andrew. It dates from the 14th century. It was restored in 1873 by William Butterfield. It is a Grade I listed building and contains some 15th century stained glass and ac ommunion table of 1631. The chest tomb in the chancel is believed to contain the remains of Sir Thomas Cheddar and is dated 1442.[22] 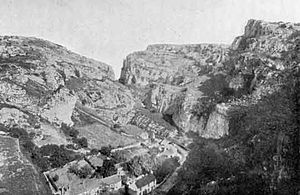 The area is underlain by Black Rock slate, Burrington Oolite and Clifton Down Limestone of the Carboniferous Limestone Series, which contain Oolite|ooliths and fossil debris on top of Old Red Sandstone, and by Dolomitic Conglomerate of the Keuper. Evidence for Variscan orogeny is seen in the sheared rock and cleaved shales. In many places weathering of these strata has resulted in the formation of immature calcareous soils.[26]

Cheddar Gorge slices deeply through the Mendip Hills, emerging on the edge of the village. It is the largest gorge in the United Kingdom.[27]

The gorge is the site of the Cheddar Caves, where Cheddar Man was found in 1903.[5] Older remains from the Upper Late Palaeolithic era (12,000–13,000 years ago) have been found.[6] The caves, produced by the activity of an underground river, contain stalactites and stalagmites.

Gough's Cave, which was discovered in 1903,[28] leads around 437 yards into the rock-face, and contains a variety of large rock chambers and formations.

Cox's Cave, discovered in 1837,[29] is smaller but contains many intricate formations. A further cave houses a children's entertainment walk known as the "Crystal Quest".[30]

Cheddar Gorge, including Cox's Cave, Gough's Cave and other attractions, attracts about 500,000 visitors each year.[31] In a 2005 poll of Radio Times readers, following its appearance on the 2005 television programme Seven Natural Wonders, Cheddar Gorge was named as the second greatest natural wonder in Britain, surpassed only by the Dan-yr-Ogof caves.[32] 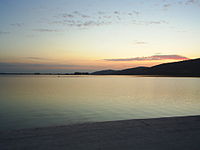 There are several large areas designated 'Sites of Special Scientific Interest' around the village:

Batts Combe Quarry from the lookout tower above Cheddar Gorge

Close to the village and gorge are Batts Combe quarry and Callow Rock quarry, two of the active Quarries of the Mendip Hills where limestone is still extracted. Operating since the early 20th century, From Batts Combe the output in 2005 was around 4,000 tons of limestone a day, one third of which was supplied to an on-site lime kiln, which closed in 2009.[36] 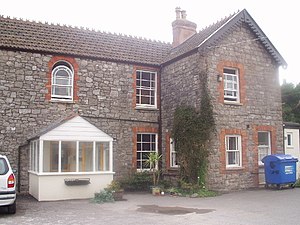 The village gave its name to Cheddar cheese, which is the most popular type of cheese in the United Kingdom. The cheese is now made and consumed worldwide, but only one producer remains in the village.

Since the 1880s, Cheddar's other main produce has been the strawberry,[37] which is grown on the south-facing lower slopes of the Mendip hills.[10] As a consequence of its use for transporting strawberries to market, the since-closed Cheddar Valley line became known as The Strawberry Line after it opened in 1869.[38][39] The line ran from Yatton to Wells. When the rest of the line was closed and all passenger services ceased, the section of the line between Cheddar and Yatton remained open for goods traffic. It provided a fast link with the main markets for the strawberries in Birmingham and London, but finally closed in 1964,[40] becoming part of the Cheddar Valley Railway Nature Reserve.[41]

Cheddar Ales is a small brewery based in the village, producing beer for local public houses.[42]

Tourism is a significant source of employment today: around 15 percent of employment in Cheddar and its rsurrounding district is provided by tourism and within Cheddar it is estimated to employ as many as 1,000 people.[43]

The clubs raise money for projects in the local community and hold annual events such as a fireworks display, duck races in the Gorge, a dragon boat race on the reservoir and concerts on the grounds of the nearby St Michael's Cheshire Home.[44]

Photochrom of Cheddar Market Cross in the 1890s

The market cross in Bath Street dates from the 15th century, with the shelter having been rebuilt in 1834. It has a central octagonal pier, a socket raised on four steps, a hexagonal shelter with six arched four-centred openings, shallow two-stage buttresses at each angle, and an embattled parapet. The shaft is crowned by an abacus with figures in niches, probably from the late 19th century, although the cross is now missing. It was rebuilt by Thomas, Marquis of Bath. It is a Scheduled Ancient Monument[45]

Hannah More, a philanthropist and educator, founded a school in the village in the late 18th century for the children of miners. Her first school was located in a 17th-century house. Now named "Hannah More's Cottage",[46] the Grade II-listed building is used by the local community as a meeting place.[47]

Kings Fitness & Leisure, situated on the grounds of The Kings of Wessex School, provides a venue for various sports and includes a 20-metre swimming pool, racket sport courts, a sports hall, dance studios and a gym.[48] A youth sports festival was held on Sharpham Road Playing Fields in 2009.[49]

In 2010 a skatepark was built in the village.