Locks on the Kennet and Avon Canal 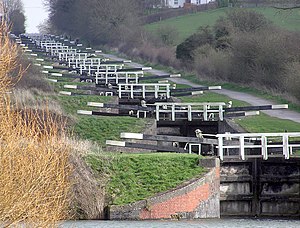 The River Kennet was made navigable to Newbury in 1723, and the River Avon to Bath in 1727. The Kennet and Avon Canal between Newbury and Bath was built between 1794 and 1810 by John Rennie, to convey commercial barges carrying a variety of cargoes.[2] and is 57 miles long. The two river navigations and the canal total 87 miles in length.[1] The section from Bristol to Bath is the course of the River Avon, which flows through a wide valley and has been made navigable by a series of locks and weirs. In the later 19th century and early 20th century the canal fell into disuse following competition from the Great Western Railway, who owned the canal. Between 1970 and 1990 the canal was restored,[3] largely by volunteers, and today is a popular heritage tourism destination, for boating, canoeing, fishing, walking and cycling.[4] It is also important for wildlife conservation.

There are a total of 105 locks on the Kennet and Avon Canal from Bristol to the River Thames, including six on the navigable section of the River Avon from Bristol to Bath and nine on the navigable section of the River Kennet to its confluence with the Thames near Reading. The remaining 90 locks lie along the 57 miles of canal.[1] In Bath the canal separates from the river but follows its valley as far as Bradford on Avon. The ornate Bath Locks lead to a stretch through Limpley Stoke valley with few locks. The flight of locks at Devizes, including the Caen Hill Locks, raises the canal to its longest pound, which then ascends the four Wooton Rivers locks to the short summit pound which includes the Bruce Tunnel. Pumping stations are used to supply the canal with water. The canal continues through the rural landscape of Wiltshire and Berkshire before joining the River Kennet at Newbury and becoming a navigable river to Reading, where it flows into the River Thames.

Locks on the Kennet and Avon Canal 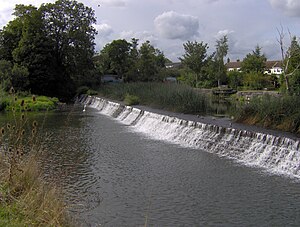 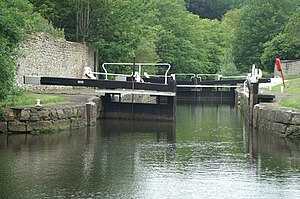 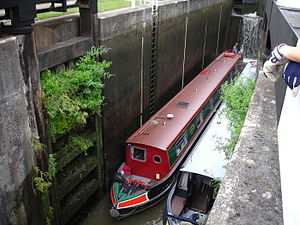 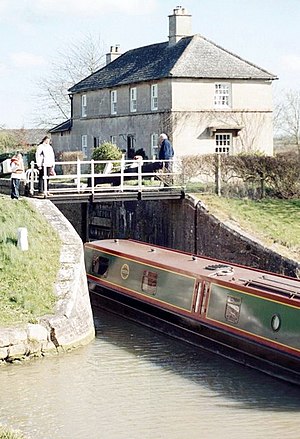 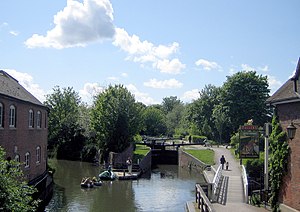 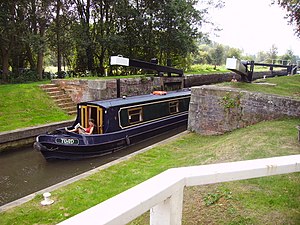 The following list numbers the locks from the River Avon in Bristol to the River Thames. It includes one lock that has been removed (98, Ufton Lock[5]) and two that have been combined to form a single deep lock (8 and 9, now Bath Deep Lock).[6][7] Travelling from Bristol to Reading, locks 1 to 54 are uphill, and locks 55 to 107 are downhill.