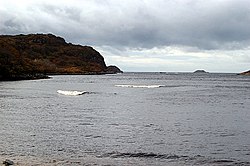 Loch Kirkaig is a small tidal sea loch, that separates Assynt in south-west Sutherland from Coigach in Cromartyshire. Loch Kirkaig is a mile and a quarter south of Loch Inver. The scattered crofting township of Inverkirkaig is located next to a pebbly beach, at the headland of the round bay, which has no known name.[1] The name Kirkaig comes from Old Norse, Kirkju-vik meaning "church bay", perhaps suggesting that in Viking times, there was a church, with a village located in the bay.[2]

Inverkirkaig lies at the head of the sea loch, surrounding a small sand and pebble beach. The principal settlement in the area is the village of Lochinver in Assynt, which is located a mile north-west of the beach, along the unnamed coast road.

Loch Kirkaig is fed by the River Kirkaig, which drains the lochs of Fionn Loch, Loch Veyatie, Cam Loch Loch á Chapuil, and indirectly Loch nan Ràc, Loch Borralan and Loch Urigill. Travelling in a southeasterly direction along the River Kirkaig through a wooded glen, is the natural wonder and tourist attraction, the 66-foot Falls of Kirkaig.[3]

The small island of Sgeir Mhòr is located close to the southern coast of the bay.