From Wikishire
(Redirected from Minch)
Jump to: navigation, search 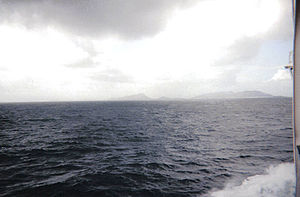 The Little Minch, view towards Lochmaddy 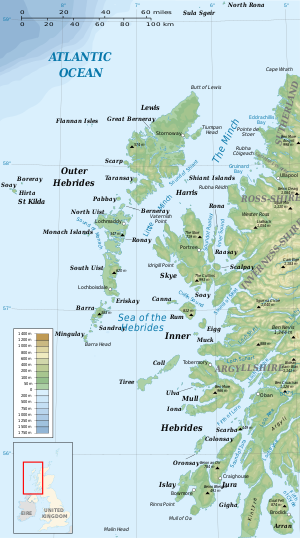 The Minch is the broad seaway which separates Great Britain and the islands of the Inner Hebrides from the Outer Hebrides.

This water is conventionally divided into two parts;

The name "The Minch" generally refers to the main part of these waters, between Ross / Sutherland and Harris / Lewis, though is the Minch and the Little Minh are regarded as a whole, the name The North Minch may be used.

The Norse, who long ruled amongst these islands, called the Minch Skotlandsfjörð.[2]

The International Hydrographic Organization classify the Minch and Lower Minch as part of "the Inner Seas off the West Coast of Scotland".[3]

The Minch ranges from 20 to 45 miles wide and is approximately 70 miles long. It is believed to be the site of the biggest meteorite ever to hit the British Isles, known as "the Ullapool bolide impact".[4]

The Lower Minch is about 15 miles wide. In June 2010 Eilidh Macdonald became the first person to swim the Little Minch, taking 9.5 hours to cross from Waternish Point on Skye to Rodel on Harris.[5][6]

The Minch is a busy shipping lane — two and a half million tons of shipping pass through the channel each month. Commercial ferry services across the Minch are operated by Caledonian MacBrayne.

A Traffic Separation Scheme operates in the Little Minch,[7] with northbound traffic proceeding close to Skye, and southbound close to Harris.

In the south, its entrance is marked by lighthouses at Barra Head, Ushenish and Hyskeir. On Skye, there are lights at Neist Point, Vaternish and An t-Iasgair.

The Outer Hebrides are marked by Weavers Point, Eilean Glas, Tiumpan Head and Butt of Lewis.

To the east are Rubh Re, Stoer Head and Cape Wrath lighthouses.[8]

A buoy marks Eugenie Rock (named after the vessel which grounded there in May 1859)[9][10] and the nearby Sgeir Graidach. Previously, these hazards were marked by a red-painted beacon on Sgeir Graidach,[11] the foundations of which can still be seen at low tide.[12]

The Minch Project is a collaboration of local councils either side of the waters and Scottish Natural Heritage which aims to reduce pollution, minimise erosion, minimise litter and promote tourism — in particular wildlife tourism such as dolphin watching — in the Minch. Pollution is a particular concern as it is a busy shipping route.