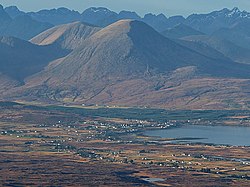 Strath is a parish in the Isle of Skye, Inverness-shire, containing the villages of Broadford and Kyleakin. It includes the islands of Scalpay, Pabay, and Longay. It is bounded to the east and south-east by Sleat, to the west by Bracadale, to the north-west by Portree, and on all other sides by the sea. Its utmost length, from north-east to south-west, is some 20 miles. Its breadth varies between 3½ and 10¼ miles.

The northern coast is indented by Loch Ainort at the Portree boundary, Broadford Bay, and Loch na Beiste, the southern by Loch Eishort at the Sleat boundary, Loch Slapin, and Loch Scavaig at the Bracadale boundary. Of eighteen fresh water lakes the largest and most interesting is Loch Coruisk, which, lying on the Bracadale border, is 114½ acres in extent, whilst of several streams the largest is the Sligachan. The surface is everywhere hilly or grandly mountainous, the chief elevations being Beinn na Caillich (2,396 feet), Sgiur na Coinnich (2,401), and Beinn na Seamraig (1,839) on the Sleat boundary, a second Beinn na Caillich (2,403) and Beinn Dearg (2,323), to the west of Broadford and Marsco (2,414), Blabhein or Blaven (3,042), and Ben Meabost (1,126), still further to the west.

Remains of pre-Reformation chapels exist at Ashig, Kilbride, and Kilmorie and ruins of seven circular towers, each in sight of the next, and all surmounting rocks, stand in the west. From the southernmost commences a series in Sleat, and from these again a series on the opposite shore of Arisaig. A number of tumuli in the east are traditionally said to mark the scene of a conflict with the Danes. A cave in the north is an object of interest to the curious as having, during several nights, in 1746, afforded shelter to Bonnie Prince Charlie. A rockingstone, consisting of a prodigious block of granite, and movable by a single finger, stands on the glebe.

The parish church was built at Broadford in 1841.