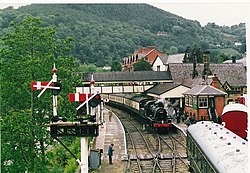 The Llangollen Railway is a volunteer-run heritage railway which operates between Llangollen in Denbighshire and Corwen in Merionethshire. The standard-gauge line, which is ten miles long, runs on part of the former Ruabon - Barmouth GWR route that closed in 1965. It operates daily services in the summer as well as weekends throughout the winter months, using a variety of mainly ex-GWR steam locomotives as well as several diesel engines and diesel multiple units. A 2½-mile extension of the railway has been built to complete the line to Corwen.[1]

Llangollen was already a popular place for tourists by the 1840s. Travel up to this point had been by horse-drawn carriage, but by the 1840s the Shrewsbury to Chester line had been completed, allowing passengers to alight at Llangollen Road (later known as Whitehurst Halt), and then take a coach towards Holyhead.[2]

However, the commercial development of the local mining industry meant that the development of a railway became essential to the region's economic development. A number of schemes were proposed, including one by the LNWR, but it was not until 1 August 1859 that scheme engineered by Henry Robertson received Royal Assent. The 5¼-mile Vale of Llangollen Railway left the Shrewsbury to Chester main line ½ mile south of Ruabon, and proceeded as a single track line on a double-track route via Acrefair to the new station at Llangollen. The line opened to freight on 1 December 1861, and to passengers on 2 June 1862 at a temporary terminus on the town's eastern outskirts.[3]

The extension to Corwen was undertaken by the associated but separate Llangollen and Corwen Railway company, and involved constructing a long tunnel under the Berwyn Mountains. It, together with the new centrally positioned and larger station in Llangollen, opened for service on 1 May 1865.[3]

Designated for closure under the Beeching cuts, the railway closed to passenger services on Monday 18 January 1965.[4] The section between Ruabon and Llangollen Goods Yard remained open for freight traffic until April 1968, but immediately after the cessation of operations the track was removed from the whole line between Ruabon and Barmouth.[4] 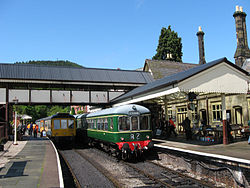 Class 109 and Class 108 DMU-Railcars at Llangollen.

After the Beeching Axe, the Flint and Deeside Railway Preservation Society was founded in 1972 with the aim of preserving one of the "axed" railways. Originally the society was interested in preserving the Dyserth to Prestatyn line; however that line was deemed unsuitable because a small amount of freight traffic was still using it.[5] The society refocused its attention on the Llangollen to Corwen section of the Ruabon to Barmouth line. The local council granted a lease of the Llangollen railway station building and three miles of track to the society, with the hope that the railway would improve the local economy and bring more tourists to Llangollen. The station reopened on 13 September 1975, with just 60 ft of track.[1]

Early progress was slow due to a lack of funding, though in 1977 Shell Oil donated a mile of unused track. Volunteers started laying the track with the aim of reaching Pentrefelin, ¾ mile from Llangollen. Work finished in July 1981 with the remaining quarter mile of track used to lay sidings at the old Llangollen Goods Junction to house the railway's growing fleet of rolling stock.

The working railway attracted the interest of many private companies, as well as the local council who renewed the lease of the land to the railway for a further 21 years. The Llangollen Railway Trust was donated significant amounts of track, allowing the next extension of the line to Berwyn. This involved a £30,000 refurbishment by the local council of the Dee Bridge, which had fallen into disrepair since the commercial closure of the line. The first trains operated over the newly extended 1¾-mile line to Berwyn in March 1986.[1] As rebuilding work progressed train services were later extended (via the 689-yard-long Berwyn Tunnel) to Deeside Halt (in 1990), Glyndyfrdwy (in 1993) and finally into Carrog on 2 May 1996.

In 2011, work (including reconstruction work) finally started on the 2½-mile section of track past the site of the closed Bonwm Halt to Corwen. As the former Corwen railway station site has been in private use as an Ifor Williams Trailers showroom since 1990, and the track bed in between also sub-divided, a new temporary station was built on the eastern side of the town.

The section marks the full operational length of the preserved line. The trust cannot extend eastwards towards Ruabon, or westwards to Cynwyd as the trackbed was not safeguarded against modern development. The final stage is a new station, Corwen Central, with permanent facilities and a run round loop.

Most trains are steam-hauled. The railway's workshops are currently the national focus of four major independent projects to rebuild steam locomotive types rendered extinct by scrapping in the 1960s: an ex-GWR 'Grange' Class 4-6-0 (represented by 'the 81st Grange' - No.6880 Betton Grange, being constructed from a combination of both new and existing locomotive parts); an ex-LMS Fowler 'Patriot' 4-6-0 (represented by a new-build engine, No.45551 The Unknown Warrior); an ex-GWR '4700' Class 2-8-0 Night Owl (the mainly new-build No.4709); and an ex-LNER B17 4-6-0, (represented by a new-build engine, No.61673 Spirit of Sandringham).