The Leaderfoot Viaduct, also known as the Drygrange Viaduct, is a disused railway viaduct over the River Tweed near Melrose in Roxburghshire. It crosses the Tweed at the foot of Lauderdale, just above the point where its river, the Leader Water, joins the Tweed (hence the name 'Leaderfoot'). The Leader marks the border with Berwickshire to this point: the Tweed then marks the border downstream. 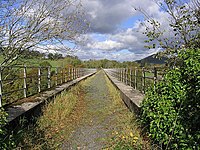 The viaduct was opened on 16 November 1863 to carry the Berwickshire Railway, which connected Reston (in Berwickshire) with St Boswells (in Roxburghshire), via Duns and Greenlaw.[1]

The engineers of the railway were Charles Jopp and Wylie & Peddie.[2]

The railway was severely damaged by flooding during August 1948, with 7 bridges on the line failing, and the line closed to passenger traffic on 13 August 1948.[1][3] Freight trains continued to run across the viaduct as far as Greenlaw until 19 July 1965.

The viaduct was upgraded from Category B to A listing in 1986.[6] Historic Scotland took over control of the viaduct from British Rail in 1996.[7][8] 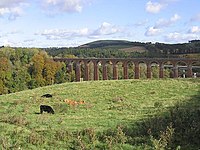 The viaduct with the amphitheatre at Trimontium

The viaduct stands 126 feet from the floor of the river valley.[2] The arches, each of 43-foot span, are of brickwork, and the abutments, piers and walls are of rustic-faced red sandstone. Some later strengthening of the abutments and piers with old rails and buttresses on the southern valley side is very obvious.[2] It is straight over its whole course, and runs in a broadly northerly direction.

The viaduct is in good condition, having been renovated between 1992 and 1995.[2][6] Repairs included replacement of masonry and brickwork, grouting, and underwater repair to one of the cutwaters.[9]