Coleford is a small market town in the west of the Forest of Dean in western Gloucestershire. It is approximately four miles east of the River Wye, which marks the boundary with Monmouthshire and so within easy reach of the delights of the Wye Valley, a popular walking and canoeing area.

Coleford was originally a tithing in the north-east corner of Newland parish. The settlement grew up (as its name suggests) at a ford through which charcoal and iron ore were probably carried. By the mid 14th century hamlets called Coleford and Whitecliff had grown up along the road in the valley of Thurstan's brook. Coleford had eight or more houses in 1349 and was described as a street in 1364. It had a chapel by 1489. In 1642 the commander of a Parliamentary garrison in Coleford started a market in the town because the nearest chartered market, in Monmouth, was under royalist control.[1]

Coleford saw some action during the English Civil War. On 20 February 1643, Lord Herbert, the Earl of Worcester’s eldest son, and the King’s Lieutenant-General of South Wales, marched through Coleford heading for Gloucester, at the head of an army of 500 horse and 1500 foot. At Coleford their progress was impeded by a troop of Parliamentarians under Colonel Berrowe, aided by a disorderly group of country people. A skirmish ensued, during which the market-house was burnt, and Major-General Lawley, who commanded the foot, with two other officers, were shot dead from a window. Colonel Brett was then put in command of the foot, Lord John Somerset continuing at the head of the horse. The Royalists forced a passage through, after capturing Lieutenant-Colonel Winter, together with some other officers and soldiers, and so, putting the Parliamentarians to flight, marched unimpeded for Gloucester.[2]

Following the Restoration, a market was granted in 1661, and a new market house built in 1679. Much building took place within the town and by 1710 it was reckoned to have 160 houses. Among the older surviving buildings in the market place the Old White Hart Inn dates from the 17th century. In the late 18th century and the early 19th the town also expanded along its other streets and most of its older houses were rebuilt. The Angel inn, which had opened by the 1650s, was refronted or rebuilt around 1800. For many years it housed an excise office and in the mid 18th century it was the town's principal coaching inn and it was used for public meetings and assemblies. The number of public houses increased as the town grew in importance and in 1830 there were seven or eight inns, most of them in the market place, and a larger number of beerhouses.[1]

The market house (or town hall) was rebuilt on a larger scale in 1866. Also in the market place was the church, which was rebuilt on an octagonal plan in 1820, but it proved too small for the growing congregation, and was pulled down in 1882, its tower being retained for a clock tower. A much larger church (St John) was built on a hillside overlooking the town. Expansion of the town continued in piecemeal fashion throughout the 20th century with both council and private development. Traffic congestion in the market place was eased by the demolition of the town hall in 1968 and the introduction of a gyratory system around the clock tower.[1]

Iron production in Coleford dates to the Middle Ages, this produced large quantities of waste material or cinders. Some formed prominent mounds, which by the late 17th century were being dug-up to provide iron-ore for the furnaces which were more efficient by that time. The mediæval ironworks were moveable forges operating on the royal demesne woodland of the Forest of Dean. An oresmithy, or furnace, was operating at Whitecliff in 1361, and the hamlet had a number of furnaces and forges in the 15th and 16th centuries. In the later Middle Ages iron was also worked in Coleford town, where there was a furnace next to the chapel in 1539.[1]

There was coal mining to the north and east of Coleford from the 16th century. Limestone was also quarried at the south-west end of Whitecliff before the 17th century. Lime kilns operated at Whitecliff, and Scowles, which supplied much lime to Monmouthshire.[1]

In 1798, work commenced on Whitecliff Ironworks, situated on the south-western edge of Coleford.[3] The furnace began operating probably in 1801 or 1802. A second furnace was built beside it before 1808. The output was limited by the quality of coke used. In 1809 David Mushet, a noted metallurgist, was employed to increase productivity but the works remained unprofitable and Mushet withdrew from the venture after a few months. The furnaces were abandoned several years later, perhaps by 1812, and certainly by 1816.[4] The surviving ruins are open to the public for viewing. 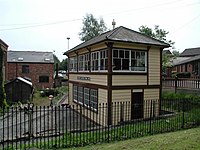 A tramroad opened in 1812 to link mines in the Forest with the River Wye at Redbrook and Monmouth and ran through Coleford.[5] The Monmouth tramroad continued in use until its track east of Coleford was lifted in the late 1870s.[5]

The first railway to reach Coleford, a branch line from Parkend opened by the Severn and Wye Railway Company in 1875, ran through Milkwall to a station on the south-east side of the town. A second railway from Monmouth, the Coleford Railway, using parts of the old tramroad route, was completed in 1883. It included a short tunnel at Whitecliff and it crossed the Newland road to run to a station next to that of the Severn & Wye Co. A junction was made between the two railways in 1884 after the Monmouth line had been taken over by the Great Western Railway. The Severn and Wye line, on which passenger services had ceased in 1929, was abandoned in 1967 and the track between Whitecliff and Parkend had been removed by 1971. Some railway buildings at Coleford, including a goods shed, were incorporated in the Coleford Great Western Railway Museum, opened in 1988.[1]

Coleford was more able to adapt to the mine closures of the 1950s than its neighbour Cinderford. Today, due to its prime location in the heart of the Forest, it is popular with walkers and cyclists, and the local council has been striving to encourage further tourist interest. There is a large factory here, originally called Carters, then Beechams, and now part of GlaxoSmithKline, the sole production facility for Ribena and Lucozade. One old building that has survived is the former goods shed for the defunct railway line to Monmouth; it is now the Coleford Great Western Railway Museum.

The town has a King George V Playing Field.