Kencot is a village and parish in Oxfordshire about two miles south-west of Carterton. The 2011 Census recorded the parish's population as 101.[1]

A Neolithic stone hand axe was found at Kencot. Petrological analysis in 1940 identified the stone as epidotised tuff from Stake Pass in the Lake District, 230 miles to the north. Stone axes from the same source have been found at Alvescot, Abingdon, Sutton Courtenay[2] and Minster Lovell.[3]

The Church of England parish church of Saint George[4] is Norman.[5] Features from this period include the south doorway,[5] whose tympanum contains a relief of Sagittarius shooting a monster, and a former doorway in the north wall.[5] The openings of the chancel windows are 13th century[6] but the windows themselves are modern.[5] The ground stage of the bell tower was built in about 1300[6] and the present chancel arch was built early in the 14th century.[5] High in the south wall of the nave are two Perpendicular Gothic windows,[6] and the late Perpendicular upper stages of the tower were completed in about 1500.[6] St George's is a Grade-II* listed building.[7]

RAF Broadwell was built in 1943 on land in the parish a mile north of the village. The airfield was in service until 1947[9] and was used by Royal Air Force Transport Command.[10] 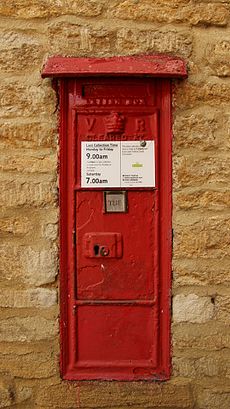 Victorian post box mounted in the wall of Dossett's Old School, next to Kencot manor house

This Oxfordshire article is a stub: help to improve Wikishire by building it up.
Retrieved from "https://wikishire.co.uk/w/index.php?title=Kencot&oldid=46553"
Categories: