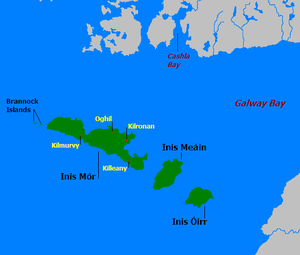 Inis Meáin is the middle of the three Aran Islands 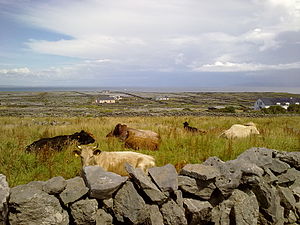 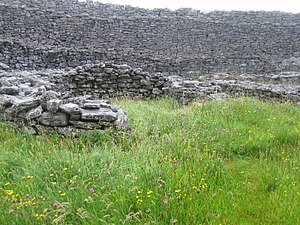 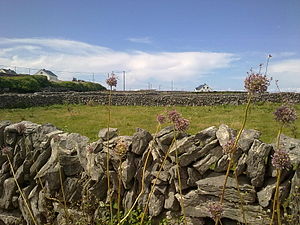 Inishmaan is the middle of the three main Aran Islands in Galway Bay. It is part of County Galway in the province of Connaught. The name in the Irish language is Inis Meáin, formerly spelled Inis Meadhóin, meaning "middle island".

Inishmaan has a population of about 160, making it the smallest of the Aran Islands in terms of population. It is one of the most important strongholds of traditional Irish culture. The island is predominantly Irish-speaking, though many inhabitants have knowledge of English.

The island is an extension of The Burren. The terrain of the island is composed of limestone pavements with criss-crossing cracks known as "grikes", leaving isolated rocks called "clints". The limestones date from the Visean period (Lower Carboniferous), formed as sediments in a tropical sea approximately 350 million years ago, and compressed into horizontal strata with fossil corals, crinoids, sea urchins and ammonites.

Glaciation following the Namurian phase facilitated greater denudation. The result is that Inishmaan is one of the finest examples of a Glacio-Karst landscape in the world. The effects of the last glacial period (the Midlandian) are most in evidence, with the island overrun by ice during this glaciation. The impact of earlier Karstification (solutional erosion) has been eliminated by the last glacial period. So any Karstification now seen dates from approximately 10,000 years ago and the island Karst is thus recent.

Solutional processes have widened and deepened the grykes of the limestone pavement. Pre-existing lines of weakness in the rock (vertical joints) contribute to the formation of extensive fissures separated by clints (flat pavement like slabs). The rock karstification facilitates the formation of subterranean drainage.

The island has an unusually temperate climate. Average air temperatures range from 15°C in July to 6°C in January. The soil temperature does not usually drop below 6°C (end 2010 recorded a prolonged period of snow, the first in living memory). Since grass will grow once the temperature rises above 6°C, this means that the island (like the neighbouring Burren) has one of the longest growing seasons in Ireland or Britain, and supports diverse and rich plant growth. Late May is the sunniest time,[1] and also likely the best time to view flowers, with the gentians and avens peaking (but orchid species blooming later).

The island supports Arctic, Mediterranean and Alpine plants side-by-side, due to the unusual environment. Like the Burren, the Aran islands are renowned for their remarkable assemblage of plants and animals.[2] The grikes (crevices) provide moist shelter, thus supporting a wide range of plants including dwarf shrubs. Where the surface of the pavement is shattered into gravel, many of the hardier Arctic or Alpine plants can be found. But when the limestone pavement is covered by a thin layer of soil, patches of grass are seen, interspersed with plants like the gentian and orchids. Notable insects present include the butterfly the Pearl-bordered Fritillary Boloria euphrosyne, Brown Hairstreak Thecla betulae, Marsh Fritillary Euphydryas aurinia and Wood White Leptidea sinapis; the moths, the Burren Green Calamia tridens, Irish Annulet Odontognophos dumetata and Transparent Burnet Zygaena purpuralis; and the hoverfly Doros profuges. 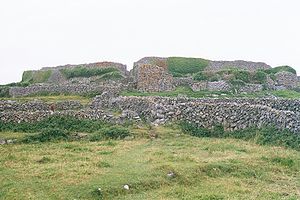 There are two notable stone forts on the island. Dún Chonchúir (Conor's Fort) is an ancient oval stone fort, dating to pre-Christian times, with views of the island's other ancient sites and the sea. And the stone fort Dún Fearbhaí, which dates from the 4th century A.D. and is unusual in being almost rectangular - instead of circular as the other fort on the island.

Clochán na Carraige is a beehive hut, the structure of which is unusual because the outside is circular but the inside is rectangular. 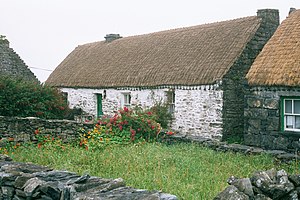 Teach Synge is the house where John Millington Synge stayed on the island every summer from 1898 to 1902, where he was hosted by Bríd and Páidín Mac Donnchadha. It was here he is said to have got inspiration for his plays The Playboy of the Western World,[3] Riders to the Sea, and many of his other works from stories he heard while on Inishmaan. The house he stayed in, Teach Synge, was inhabited by descendants of the Mac Donnchadha family until the 1970s, when it began to fall into disrepair. It has been restored to its original condition, and has been open to the public since August 1999.

Cathaoir Synge (Synge's Chair) was the writer's favourite place on the island, overlooking Inishmore and the Atlantic.

The island is connected to the national grid via a submarine cable as well as having wind turbines with an installed capacity of 675 kW.

A desalination plant provides water for the residents[4]

Inis Meáin also has a wind farm which runs its desalination plant and fuels the electric car.[5]

Inis Meáin has a new jetty ("Caladh Mor") since 2007. It also has an airstrip connecting it to the mainland, with flights operated by Aer Arann from Connemara Regional Airport.

There is a primary school on the island, Scoil Náisiúnta Inis Meáin.[6][7][8]

There is also a secondary school, Colaiste Naomh Eoin.[9] Coláiste Naomh Eoin was opened on 1 September 2003 under the auspices of Coláiste Colmchille (Inverin) and the County Galway Vocational Education Committee. It caters for the entire second level educational needs of the Aran islands. Senior Cycle was first introduced in 2006. The school is housed in a building on hire from the local co-operative. Four school classrooms and the school office are located there. The new science laboratory which was renovated in 2008. A woodwork, technical graphics and construction studies workshop was added to the infrastructure over 2008/2010. The school also has use of the local football pitch, in addition to a lined basketball court. The students of Coláiste Naomh Eoin wear a red V neck jumper with a grey polo neck with the crest of the school imprinted on them. Both male and female students wear black trousers with black shoes or runners.

There is a public library on the island. It holds a diverse and quality collection of adult and children's books. It is open every Tuesday and Thursday from 2.00pm to 4.00pm and on Saturdays from 11.00am to 1.00pm. The library provides a reference and local studies collection with information on the heritage and history of the island. There is also free internet access.

Some of the limestone sea cliffs have attracted interest from rock-climbers.[10] Diving is popular.[11]