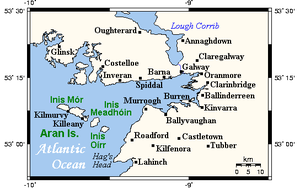 Map of Galway Bay and environs.

Galway Bay is famous for its unique traditional sailing craft, the Galway Hooker.

If you ever go across the sea to Ireland
Then maybe at the closing of your day
You will go and see the moon rise over Claddagh
Or see the sun go down at Galway Bay.

Have you ever seen the seagulls
a-flying on to Heaven
or the crimson sails on Galway Bay
the fishermen unfurl?

There's a full moon over Galway Bay tonight
Silver light over green and blue
And every place I travel through, I find
Some kinda sign that you've been through

Earle also mentions Galway and The Long Walk in his song "Galway Girl".

The boys in the NYPD choir
are still singing "Galway Bay"
And the bells are ringing out
For Christmas day."

A drunk night in Dublin
Ended up in Galway Bay