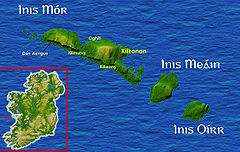 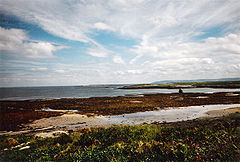 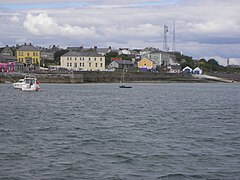 A view over the karst landscape on Inishmore from Dún Aonghasa

Inishmore is the largest of the Aran Islands of Galway Bay and has an area of 12 square miles. Inishmore has a population of about 840, making it the largest of the Aran Islands in terms of population. The island is famous for its strong Irish culture, loyalty to the Irish language, and a wealth of Pre-Christian and Christian ancient sites including Dún Aengus, described as "the most magnificent barbaric monument in Europe" by George Petrie.[1]

Prior to the 20th century, the island was more commonly called Inis Bant or as Árainn na Naomh. The modern Irish name, Árainn Mhór, (which translates as "Great Aran" in English) leads to some confusion with Arranmore, County Donegal. The Irish word Árainn means "long ridge" which is an apt description for the island. The name lenited, so the expected name would be Inis Mhór. Árainn is still the official Irish name.

The island is an extension of The Burren. The terrain of the island is composed of limestone pavements with criss-crossing cracks known as "grikes", leaving isolated rocks called "clints". The limestones date from the Visean period (Lower Carboniferous), formed as sediments in a tropical sea approximately 350 million years ago, and compressed into horizontal strata with fossil corals, crinoids, sea urchins and ammonites. Glaciation following the Namurian phase facilitated greater denudation. The result is that Inishmore and the other islands are among the finest examples of Glacio-Karst landscape in the world. The effects of the last glacial period (the Midlandian) are most in evidence, with the island overrun by ice during this glaciation. The impact of earlier Karstification (solutional erosion) has been eliminated by the last glacial period. So any Karstification now seen dates from approximately 10,000 years ago and the island Karst is thus recent.

Solutional processes have widened and deepened the grikes of the limestone pavement. Pre-existing lines of weakness in the rock (vertical joints) contribute to the formation of extensive fissures separated by clints (flat pavement like slabs). The rock karstification facilitates the formation of subterranean drainage.

The island has an unusually temperate climate. Average air temperatures range from 15 °C in July to 6 °C in January. The soil temperature does not usually drop below 6 °C, although the end of 2010 recorded a prolonged period of snow, the first in living memory. Since grass will grow once the temperature rises above 6 °C, this means that the island (like the neighbouring Burren) has one of the longest growing seasons in the British Isles, and supports a diverse and rich plant life. Late May is the sunniest time,[2] and also likely the best time to view flowers, with the gentians and avens peaking but orchid species blooming late.

The island supports Arctic, Mediterranean and alpine plants side by side, due to the unusual environment. Like the Burren, the Aran islands are known for their unusual assemblage of plants and animals.[3] The grikes (crevices) provide moist shelter, thus supporting a wide range of plants including dwarf shrubs. Where the surface of the pavement is shattered into gravel, many of the hardier Arctic or Alpine plants can be found. But when the limestone pavement is covered by a thin layer of soil, patches of grass are seen, interspersed with plants like the gentian and orchids. Insects present include the butterfly the Pearl-bordered Fritillary Boloria euphrosyne, Brown Hairstreak Thecla betulae, Marsh Fritillary Euphydryas aurinia and Wood White Leptidea sinapis; the moths, the Burren Green Calamia tridens, Irish Annulet Odontognophos dumetata and Transparent Burnet Zygaena purpuralis; and the hoverfly Doros profuges with sightings of the Bantasauras Rex on the island.

Inishmore is a major tourist destination, with bed-and-breakfast accommodation scattered across the island. Private minibuses, horse-drawn carriages and bicycles are the main methods of getting about for the numerous tourists who visit the island in the summer months. The majority of visitors are Irish themselves, but the island is also popular with British, French and German holiday-makers. There is a small museum illustrating the history of Dún Aenghusa and its possible functions, while the Aran Sweater Market is also a focal point for visitors who can trace the culture and history associated with the Aran sweater through the on-site museum. Nearby are a Neolithic tomb and a small heritage park at Dún Eochla, featuring examples of a traditional thatched cottage and poteen distillery.[4]Arann Islands Website

Some of the limestone sea cliffs have attracted interest from rock-climbers.[5] Diving is possible.[6] From 2012 Inishmore is hosting an event as part of the Red Bull Cliff Diving World Series.

The island is serviced by Aran Ferries ferry from Rossaveal and Doolin and by Aer Arann Islands from Inishmore Aerodrome to Connemara Airport.

The island features heavily in Martin McDonagh's play The Lieutenant of Inishmor.

It was also featured in the 1997 film "The Matchmaker".

Aran in the Irish annals