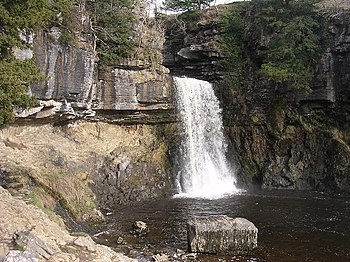 Thornton Force on the trail

The Ingleton Waterfalls Trail is a well-known circular trail in the West Riding of Yorkshire, created in the Victorian Age. Five miles long, the trail loops around a series of pretty waterfalls on the valleys of the Rivers Twiss and Doe, which join in Ingleton.

The trail begins and ends in the village of Ingleton. The trail is now maintained by the Ingleton Scenery Company: it is on private land and an entrance fee is charged.

It is claimed that the five mile trail, with a vertical rise of 555 feet, has some of the most spectacular waterfall and woodland scenery in Yorkshire.

The waterfalls found along the trail are:

Following a number of articles in the Lancaster Guardian and other newspapers about the scenery in and around Ingleton, public interest led to the creation of the trail in an area which was previously hidden from view. Paths and bridges were built and the trail opened on Good Friday, 11 April 1885.[1] The presence of Ingleton railway station played a major role in the early success of the trail, attracting visitors from Bradford, Manchester and Leeds.[2] 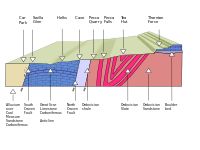 Ingleton lies on the North and South Craven fault, exposing Carboniferous and Ordovician rocks. The mysterious Ingletonian rock has been classified as Ordivician.[3]

Starting in the Broadwood car park the trail takes walkers along the banks of the River Twiss, through Swilla Glenn with its coin-embedded tree and on to Pecca Falls, Pecca Twin Falls, Holly Bush Spout and Thornton Force.

A footbridge bridge crosses the Twiss and leads on to Twistleton Lane, where in summer there is often an ice cream van waiting to serve hot and thirsty tourists. Following Twistleton Lane down past Scar End Farm and Twistleton Hall the walk crosses Oddies Lane to Beezley's Farm. 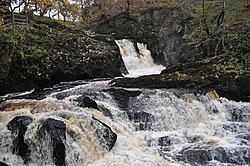 Past Beezley’s Farm, the trail starts its descent along the banks of the River Doe. This river emerges near God's Bridge close to the settlement of Chapel-le-Dale and flows gently until it reaches the waterfalls walk at Beezley's Falls Triple Spout (with its three waterfalls side-by side).

As the trail continues, you look down 60 feet onto Rival Falls and then on to Baxenghyll Gorge, Snow Falls and finally walk through Twistleton Glenn and back to Ingleton.

In Ingleton, the Twiss and the Doe meet to form the River Greta, which in turn flows into the River Lune.

English Nature designated the River Twiss and River Doe areas of the Waterfalls Trail as a Site of Special Scientific Interest by reason of the interesting plants and animals and the geological structures located there.[4]