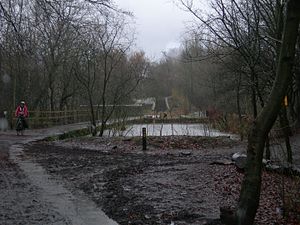 Aqueduct over the River Medlock and remains of the first lock

The Hollinwood Branch Canal is an abandoned canal near Hollinwood, in south-eastern Lancashire, though one with a possibility of revival. The branch left the main line of the Ashton Canal at Fairfield Junction immediately above lock 18. It was just over four and a half miles long and ran through Droylsden and Waterhouses to terminate at Hollinwood Basin (Hollinwood Top Wharf). The canal rose through four locks at Waterhouses (19–22) and another four at Hollinwood (23–26). Immediately above lock 22 at Waterhouses was Fairbottom Junction where the Fairbottom Branch Canal started. Beyond Hollinwood Basin there was a lock free private branch, known as the Werneth Branch Canal, to Old Lane Colliery, which opened in 1797.

The canal is today enrolled as a biological 'Site of Special Scientific Interest'[1] and a Local Nature Reserve.[2][3]

The Hollinwood Branch Canal was comparatively rural in character apart from mills and factories at Droylsden. Its main purpose was to carry coal from numerous local collieries to the many mills and factories in the neighbourhood of the Ashton Canal. Passengers were also carried along its length.

Much of the line of the former canal remained intact, and there are now plans to re-open the Hollinwood Branch Canal as an amenity canal, with the support of the local authorities. However, the problems of restoring this canal are far more challenging than those of restoring the Stockport Branch Canal. Not only is it suffering from the effects of mining subsidence but also its line has been severed twice by the Manchester ring road, which would require the construction of aqueducts to cross it. Another aqueduct would also be required to replace one across a railway that was demolished some time ago. The line up to Hollinwood Basin could not be restored because buildings now obstruct it, but there are plans to connect the rest of it to the Rochdale Canal by means of a short new canal from just below the site of lock 23. Such a link was originally planned in 1792, but never built.[4]

The first part of the restoration has started, with a £100 million redevelopment scheme for Droylsden including housing, flats, restaurants, shops and offices, centred on a new marina which is connected to the line of the canal,[5] and which was opened in September 2008.[6] About 190 yards of canal from the junction with the Ashton Canal have been refurbished, and new waterside facilities for boaters are available near lock 18. The original plans would have blocked further restoration of the canal, but were changed after representations were made by the Hollinwood Canal Society, and the canal will now pass under a building which will span the route.[7] 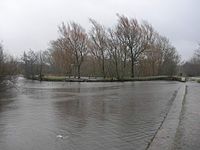 The Hollinwood Branch Canal at Waterhouses is unique among Britain’s canals and it is now part of the Daisy Nook Country Park owned by the National Trust. In 1,320 yards it included every type of canal feature, as well as some more unusual ones as well. Over this length these features were once to be found, starting and ending with road bridges over the canal:

Mention must be made of a neighbour of the pumping engine known as ‘Fairbottom Bobs’. This was a Newcomen steam engine (more accurately a Newcomen atmospheric engine) used to pump water from a coal mine. The water was pumped along a wooden flume for a distance of about 219 yards and then discharged into the Fairbottom Branch Canal at Fenny Fields Bridge.

In 1929 this engine was dismantled and taken to the United States by Henry Ford who had it completely restored. It was then placed at the Henry Ford Museum and Greenfield Village in Dearborn, Michigan.

The name "Fairbottom Bobs" is older than the Newcomen engine. It was used to describe the pumps driven by water wheels driven by the River Medlock. The 'bobs' were L-shaped linkages designed to convert the circular motion of the wheels into an up-and-down pumping action. Early maps show the Newcomen engine as "Mr. Lees' Engine" and the Ashton Company had to negotiate with Mr. Lees (in 1798) to have the water redirected into the canal when it was built.[8]