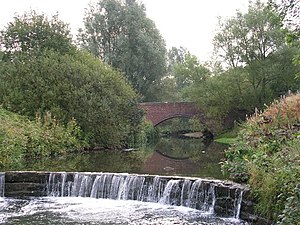 Weir on the Medlock at Clayton Vale

The River Medlock is a river in southern Lancashire. It rises near Oldham and flows south and west for ten miles to join the River Irwell in the extreme southwest of Manchester city centre.

The stream rises in the hills that surround Strine Dale, at the border of Lancashire with the West Riding of Yorkshire, the streams rising in both counties (53°33’31"N, 2°3’23"W). Down Strine Dale the river forms the county border for a little way.

The Medlock runs through a steep-sided wooded gorge that separates Failsworth from Ashton-under-Lyne and the Daisy Nook Country Park with its 19th-century aqueduct carrying the disused Hollinwood Branch Canal over the shallow river. 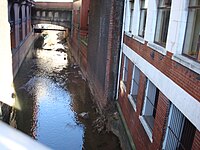 The final miles of the river flowing to the River Irwell have been extensively modified. The river is culverted underneath the car park of the City of Manchester Stadium (the site of a former gasworks). It is visible under a bridge on Baring Street, close to Manchester Piccadilly station, before running again in a culvert beneath the former UMIST campus (London Road (A6) to Princess Street), then under Hulme Street, until it appears briefly at Gloucester Street before flowing under the former gasworks at Gaythorn, reappearing at City Road East. At the point where Deansgate and Chester Road (A56) meet (under the Bridgewater Viaduct) the river meets the Bridgewater Canal head on, where a sluice gate (a listed structure) allowed water to feed the canal, until the water quality of the Medlock became too polluted for canal use. Normally the level of the river is several feet below the level of the canal, and the river is carried in a tunnel under the Castlefield canal basin, reappearing at Potato Wharf, where it is supplemented by excess canal water draining into a circular weir. When the river is in spate the tunnel cannot cope and river water enters the canal, flows across the basin, and exits by way of the weir and manually operated gates. A quarter of a mile further on the Medlock enters the Irwell adjacent to the bottom gate of the disused Hulme Locks.

In the latter part of the 18th century the river was navigable at least between the Bridgewater Canal (at Deansgate) and the site of India House (on Whitworth Street). At India House was the entrance to a tunnel (built more than a century before India House) used to carry coal to a wharf at Store Street (by Piccadilly station).[1] The tunnel mouth is still visible. The tunnel was rendered obsolete by silting of the river and the construction of the Rochdale Canal.

The area just south of Oxford Road railway station enclosed by the railway line and the loop in the river was known as 'Little Ireland', settled by Irish labourers in the Victorian period. It was described by Friedrich Engels as "the most horrible spot" of the area.[2] It is commemorated by a red plaque in Cambridge Street near New Wakefield Street.[3]