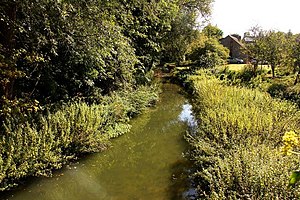 The stream at North Hinksey

The Hinksey Stream is a branch of the River Thames to the west of the city of Oxford. It starts as the Seacourt Stream (also known as the Wytham Stream), which leaves the Thames at a bifurcation north of the village of Wytham, and rejoins the river south of the city near Kennington.

The Hinksey Stream branches off Seacourt Stream on its right bank just before the confluence with Bulstake Stream. It flows between the village of South Hinksey to the west and the suburb of New Hinksey to the east. It flows under the Oxford Ring Road near its junction with the Abingdon Road (A4144). Shortly after it is joined on its left bank by Weirs Mill Stream, another branch of the Thames, 1.3 miles long, which leaves the river just north of Donnington Bridge. The Hinksey Stream joins the Thames just above Kennington Railway Bridge. The Thames Path crosses Hinksey Stream on a footbridge at this point.

A ferry used to operate between Ferry Hinksey Road, off the Botley Road in west Oxford, and North Hinksey, formerly known as Ferry Hinksey. This ceased operation in 1928 and the two are now linked by bridges. 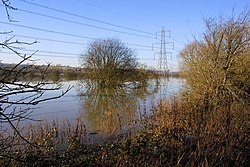 The Hinksey Stream in flood

The streams of the Thames at Oxford were not always as they are now. Since Anglo-Saxon times the Seacourt Stream has formed the border between Berkshire and Oxfordshire here. In the 16th century the stream was known as Shire Lake.[2] The Shire Lake has shrunk somewhat since then, as the Thames has been engineered for navigation. Only when the waters rise do we have an indication of the width of the river here in ages past.

Downstream of North Hinksey the boundary between Berkshire and Oxfordshire is Hogacre Stream (or Hogacre Ditch), a branch of Bulstake Stream which runs parallel to Hinksey Stream and joins it after a mile or so.