From Wikishire
Jump to: navigation, search
Not to be confused with New Brighton, Flintshire

New Brighton is a seaside resort on the Wirral in Cheshire. It effectively forms part of the neighbouring town, Wallasey. New Brighton stands at the north-eastern tip of the Wirral Peninsula, where sandy beaches line the shore of the Irish Sea. The town was created specifically to draw holidaymakers, and named after the most famous of the seaside resort towns; Brighton in Sussex.

Up to the 19th century, the area had a reputation for smuggling and wrecking, and secret underground cellars and tunnels are still rumoured to exist. It also had a strategic position at the entrance to the Mersey Estuary.

The Perch Rock battery was completed in 1829. It mounted eighteen guns, mostly 32 pounders, with three 6-inch guns installed in 1899. Originally cut off at high tide, coastal reclamation has since made it fully accessible.

In 1830, a Liverpool merchant, James Atherton, purchased much of the land at Rock Point, which enjoyed views out to sea and across the Mersey and had a good beach. His aim was to develop it as a desirable residential and watering place for the gentry, in a similar way to Brighton, one of the most elegant seaside resorts of that Regency period; hence "New Brighton". Substantial development began soon afterwards, and housing began to spread up the hillside overlooking the estuary. A former gunpowder magazine, somewhat spoiling the upmarket atmosphere, was closed down in 1851.

During the latter half of the 19th century, New Brighton developed as a very popular seaside resort serving Liverpool and the Lancashire industrial towns, and many of the large houses were converted to inexpensive hotels. A pier was opened in the 1860s, and the promenade from Seacombe to New Brighton was built in the 1890s. This served both as a recreational amenity in its own right, and to link up the developments along the estuary, and was later extended westwards towards Leasowe.

The River Mersey and the resort were described by the diarist Francis Kilvert in 1872 as: "crowded with vessels of all sorts moving up and down the river, ships, barques, brigs, brigantines, schooners, cutters, colliers, tugs, steamboats, lighters, "flats", everything from the huge emigrant liner steamship with four masts to the tiny sailing and rowing boat … At New Brighton there are beautiful sands stretching for miles along the coast and the woods were green down to the salt water's edge. The sands were covered with middle class Liverpool folks and children out for a holiday."[1]

The New Brighton Tower, the tallest in the country, was opened in 1900 but closed in 1919, largely due to lack of maintenance during the First World War. Dismantling of the tower was complete by 1921.

Ferries across the Mersey from Liverpool to New Brighton ceased in 1971, after which the ferry pier and landing stage were dismantled. By 1977, the promenade pier had suffered the same fate.

The area became the subject of Martin Parr's famous and controversial photographic book The Last Resort.

New Brighton has two recognisable churches dominating the skyline and viewable from the [[River Mersey].

Fort Perch Rock is a historically important site in the defence of the Port of Liverpool from the Napoleonic Wars to Second World War. Apart from its defensive importance, it has also been a museum and venue for musical performances.

The New Brighton Lighthouse was originally known as Perch Rock Lighthouse. Construction of the present structure began in 1827 (though a light had been maintained on the rock since 1683). It is a free-standing, white-painted granite tower. Since 1 October 1973 it has not been in use as a lighthouse, having been superseded by modern navigational technology. These days the lighthouse is maintained by the Kingham family.[2]

The open-air Bathing Pool opened in 1934 and was built to competition standards.[3] South-facing, its walls were designed to act as a sun-trap and avoid seaborne winds. From 1949 to 1989 it was also home of the "Miss New Brighton" contest.[3]

The pool closed in 1990, following storm damage, and was demolished a short time later. As part of the privately funded element of the Marine Point Development, an outdoor swimming pool was built at New Brighton in the period 2012-14. Due to a change of use in the building adjacent to the pool from a gym to a children's play centre, this pool has never been opened to the public. So although there currently exists a new-build swimming pool at New Brighton Promenade it has never been used and is currently lying derelict and surrounded by fencing in a prime location along the promenade. It is unclear as to the future of this swimming pool. 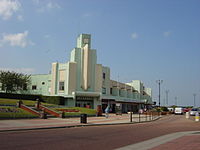 New Brighton has a wide range of visitor attractions and facilities. These focus on the £60m Marine Point Leisure and Retail development completed in 2011. This includes The Light 8 Screen digital multiplex cinema, a Travelodge hotel, a range of café bars and restaurants, a supermarket and a sailing school using the refurbished Marine Lake.

Other attractions include the Riverside Bowl bowling alley, the Lazer (sic) Quest centre, the Art-Deco New Palace Amusement Arcade (which includes a small fairground) and the Floral Pavilion Theatre which was rebuilt in 2008 as a first phase of the Town's regeneration and accommodates a Conference Centre. Significant investment has also been made in the public realm with particular highlights being a model boating lake and the Promenade.

The Wirral Show, a free-to-enter annual event, was held on open ground off the King's Parade at New Brighton.[4] In 2009 it was announced that after 33 years, The Wirral Show was to be axed.[5]

The New Brighton railway station is located on the Wirral Line of the Merseyrail network. Support is growing for Merseytravel, the regional transport authority to re-instate the ferry to Liverpool.