The Greek Letter Islands are a set of twelve small islands and islets in the Great Sound of Bermuda, named from successive letters of the Greek Alphabet, and Omega at the end. They all belong to Warwick Parish. They are not a formal group of islands nor is the designation 'Greek Letter Islands' any more than a convenient collective name.

The islands runs lie off the shores of a group of four larger islands: Long Island, Hawkins Island, Ports Island and Nelly island, counted off in a long ring around them. 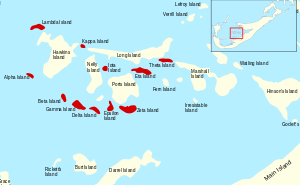 Β: Beta Island lies to the east of Alpha Island, and is the westernmost of a string of five sequentially named Greek-letter islands. Beta is southwest of Nelly Island, at 32°16’56"N, 64°49’40"W.

Δ: Delta Island lies just to the east of Gamma Island and to the west of Epsilon Island, south of the sound separating Nelly Island from Ports Island, at 32°16’52"N, 64°49’27"W.

Ζ: Zeta Island is the easternmost of the string of Greek Letter Islands south of the main chain in the Great Sound, and the largest of them at 1½ acres. It has Epsilon Island to the west, and itself lies just off the south coast of Port's Island, at 32°16’52"N, 64°49’13"W.

Η: Eta Island plugs the narrows between Ports Island to the southwest and Long Island to its north. It is a long thin island, north of Zeta Island, found at 32°17’6"N, 64°49’8"W. During the Boer War, prisoners of war on work parties crossed from Port's to Long and the other way around by way of a wooden footbridge on this island. Today the island is privately owned.

Ω: Omega island is the one out of sequence (the last letter of the Greek Alphabet). It is an islet a few yards west of Lambda Island.