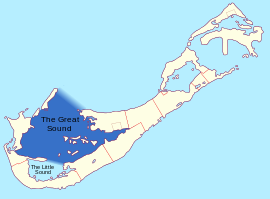 Location of the Great Sound 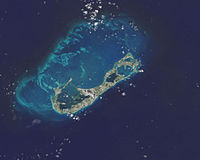 Bermuda and its reefs from space

The Great Sound forms a capacious natural harbour. In the east, the Great Sound narrows to form Hamilton Harbour. Bermuda's capital, Hamilton, sits against the northern shore of this harbour. The face of the Great Sound against the ocean is nevertheless barred by a reef and for centuries large ships would not enter the Sound. It took a detailed hydrographic survey by the Royal Navy at the end of the eighteenth century to chart "the narrows" through which ships may pass the reef into the Sound. 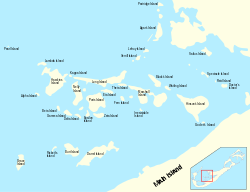 Islands in the Great Sound

Many islands lie within the Great Sound, most of them in the southeastern part of it. These include Darrell's Island, Hawkins Island, Long Island, Marshall's Island, Hinson's Island and Watling Island. In a stretched ring around Long and Marshall's Islands are the "Greek Letter Islands": eleven of them, named Alpha to Lambda.

All these main islands named are within Warwick Parish apart from Hinson's, which belongs to Paget Parish. Pembroke Parish which touches the sound’s northeast coast has a few islands in the sound too.