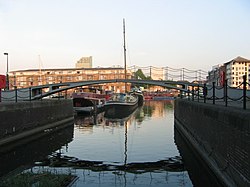 The Grand Surrey Canal was a canal constructed during the early 19th century to transport cargo, primarily timber, to the Surrey Commercial Docks. It started and finished in Surrey, but trespassed into Kent at Deptford. From Surrey Commercial Docks, it opened to the Old Kent Road in 1807, to Camberwell in 1810, and to Peckham in 1826.

The Grand Surrey Canal closed progressively from the 1940s, with all but the Greenland Dock closing in the 1970s. Much of the route is traceable, as it has been turned into roadways and linear parks.

During the late 1700s, there were a number of proposals for canals on the south bank of the River Thames, and several of the prominent canal engineers of the time were involved. John Smeaton looked at two possible routes for a canal between Kingston upon Thames and Ewell in 1778. Ralph Dodd, who was also involved with promoting the Thames and Medway Canal, proposed a canal with a number of branches linking Deptford, Clapham, Kingston, Ewell, Epsom, Mitcham and Croydon. A plan for a canal from Croydon to Wandsworth was thought to be impractical by William Jessop and John Rennie, because the main source of water in the area through which it would run was the River Wandle, and this supplied a number of mills which would be affected if the river was used to supply the canal. Jessop also advised on a canal from Vauxhall to Rotherhithe in 1796, while in 1799, a railway from London through Croydon to Portsmouth, using horses to pull the wagons, was suggested. Eventually, three projects were submitted to parliament for approval. These were the Grand Surrey Canal, at the time called the Kent and Surrey Canal, the Croydon Canal linking Croydon and Rotherhithe, and the Surrey Iron Railway, a horse-drawn linking Croydon to Wandsworth, and all three were authorised in 1801.[1]

The Grand Surrey Canal was authorised by an Act of Parliament obtained on 21 May 1801, which created the Company of Proprietors of the Grand Surrey Canal, and gave them powers to raise £60,000 by issuing shares, and an additional £30,000 if required. They were authorised to build a canal from Rotherhithe, on the River Thames, to Mitcham, with branches to any places within 1,500 yds of the main line.[2] Branches to Deptford, Peckham, the Borough, and one to rejoin the Thames at Vauxhall were included, but proposals for a branch from Mitcham to Croydon, and another to Kingston, which would have created a route to bypass the Thames through London, were removed from the bill during the committee stages. Those who opposed the canal ensured that clauses restricting use of water from the Wandle were inserted.[3] 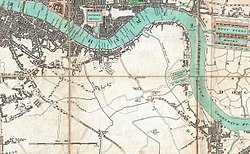 Work began on the canal, but at the same time, the London dock system was in its early stages of development, and there were proposals by John Hall in 1802 to construct a dock at Rotherhithe, close to the lock by which the canal gained access to the Thames. The canal company agreed to construct it in 1803, and although it was poorly funded, the three-acre basin, together with a ship lock, was completed and opened on 13 March 1807. The Croydon Canal, which had also been authorised in 1801, proposed to join the Surrey Canal near Deptford, to save having to construct a parallel route to the Thames. The prospect of rent from this arrangement helped the company to open the first three miles of the canal, as far as the Old Kent Road, in 1807, but their resolve to complete the canal had been lost, as the docks seemed a more lucrative prospect.[4]

However, a second Act of Parliament, obtained in 1807, authorised them to raise another £60,000, which was used to extend the canal to Memel Wharf and a basin at Camberwell. This work was completed in 1810. So far, the route had been level, but to go any further would have needed locks or inclined planes, and the expected costs of their construction did not inspire the company to proceed with them. A short branch of about ½ mile was constructed in 1826, running from Glengall Wharf to Peckham Basin.[4] Two further acts of parliament were obtained in 1808 and 1811 to allow new funds to be committed to the project.[2]

In 1812, the canal was closed for two months while the company finished work on a new dock and connecting lock, which opened in November. Although no extensions to the canal other than the Peckham Branch were made, there was intermittent interest in such schemes. Some land was bought along the route of an extension from Camberwell to Kennington, which was considered in 1817, but was rejected because construction would require a deep cutting, restricting the amount of land available for wharves. The Peckham Branch, when it opened in May 1826, ended at a basin which was 450 by 80 ft, because of the demand for wharf space. When the London and Croydon Railway bill was passing through Parliament in 1835, which would result in the closure of the Croydon Canal, the Grand Surrey company managed to insert clauses into the bill to protect their canal against a low-level railway crossing, but failed to include a compensation clause for loss of trade from the Croydon Canal.[5]

The engineer Henry Price approached the company in 1835 with a grand scheme for branches from the canal to the Thames at Vauxhall and Deptford, which would provide a route which was some 2½ miles shorter than the river route between Vaulhall and Rotherhithe. The scheme also included a railway along the bank of the canal from Vauxhall to Deptford, with a branch to Elephant and Castle. A prospectus was issued for the Grand Surrey Dock, Canal and Junction Railway Company, but there was little interest in subscribing the £600,000 capital needed, and the scheme foundered. Another scheme in 1850 was for a canal to the Kennet and Avon Canal at Reading, with branches to the Thames at Maidenhead, Datchet, Staines, Richmond, Mortlake, Wandsworth and Vauxhall. The route would have reduced the distance between Reading and Deptford from 42 miles to 22 miles, but it seems unlikely that the estimated cost of only £500,000 was realistic.[6]

The Rotherhithe end of the canal saw many changes, as the docks developed. As first built, the canal ended at the Stave dock, which was connected to the Thames by a lock. This was replaced by a new lock in 1860, built to the west of the original, which linked the Thames to a triangular basin, known as the Surrey Basin, which was itself linked to Island Dock and Albion Dock. Island Dock led into Russia dock, where the canal had an entrance lock. The Commercial Dock Company built a number of docks to the east, and the rivalry between the two companies ended in 1864, when they amalgamated and the complex became part of the Surrey Commercial Docks.[7] The canal entrance lock was swept away in 1904, when the Greenland Dock was extended, and a new entrance lock was built on its south side. By this time, nearly a mile of the original canal had been destroyed by dock construction.[8] 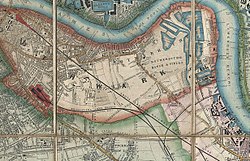 During the second half of the 19th century, the canal was used by the South Metropolitan Gas Company to supply coal using its own fleet of tugs and barges to its gas works site on the Old Kent Road. The canal was also heavily used to move timber[8] — Whitten Timber at Eagle Wharf in Peckham Hill Street is a family firm which can trace its associations with the canal back to 1835. Tolls for use of the canal were collected at four toll-houses, which were situated near Wells Street bridge in Camberwell, by the junction with the Peckham Branch, by the junction with the Croydon Canal, and at the junction with Greenland Dock. At each there was a gate across the towpath, which prevented progress until a toll had been paid. The gate was known as a "hatch", from the word for a gate or sluice, and the toll-houses were also called hatches by association.[9] The canal was never very profitable, as stiff competition between the London dock companies kept toll rates low. A first dividend of 2 per cent was paid in 1819, which increased to 3 per cent the following year, but remained at or below this figure for the life of the canal.[10]

Below the junction with the Croydon Canal, a railway bridge was built for the Deptford Wharf branch, which was authorised by the London and Croydon Railway Act of 1846. In 1854, the London, Brighton and South Coast Railway gained an Act, and the Deptford Wharf Branch was re-routed over the canal at a lower level. The canal company campaigned for a swing bridge to be built, but the Railway Commissioners overruled their objections, and a vertical lifting bridge was installed. This was 13 ft wide and 31 ft 6 in long, and provided 9 ft 6 in of headroom when it was raised. Operation was initially manual, but electric motors were later installed, and it continued to operate until the branch was lifted in 1964.[9]

The Grand Surrey Canal was the first to have canal police (forerunners of the British Transport Police). "Bank rangers" were appointed in 1811 to keep law and order along the length of the canal.[11]

London's docks were rationalised in 1908, with the formation of the Port of London Authority. The canal was managed as part of Surrey Docks, and although there were few changes to its operation, it became known as the Surrey Canal.[12] Despite the large number of railway bridges which crossed it, the railways were not in direct competition with the canal. There was a railway interchange on the remains of the Croydon Canal, and South Dock was served by the Deptford Branch railway, but neither offered a real threat, and the canal continued to thrive until the expansion of road transport after the end of the Second World War in 1945.[7] The Camberwell basin and the final 500 yds of the canal were abandoned in the 1940s, and had been filled in by 1960. The timber trade to the docks ceased in the early 1970s, resulting in the docks closing, and the canal being filled in.[12] The section of canal between South Bermondsey and Deptford was opened as a vehicular road and renamed Surrey Canal Road in the 1980s, linking Ilderton Road with Trundleys Road. Where the canal crossed Trundleys Road and proceeded towards the Evelyn Street and the docks was utilised as a private access road called Canal Approach to serve the warehouses and industrial sites that still existed along the top end of the canal's route. The former canal side offices and buildings opposite Deptford Park on Grinstead Road were largely demolished and replaced by a modern Barratt development of flats called Inwen Court.

The former Camberwell Basin and the final mile now form part of the site of Burgess Park,[13] while most of the Peckham branch, including its bridges and walls, is now a walking and cycling route. Peckham Library has been built over the terminal basin.[14] The Greenland Dock remains in water, and is connected to the South Dock, now a marina, which gives access to the River Thames through a lock.