Vauxhall is a town in Surrey long since absorbed within the midst of the metropolitan conurbation and rendered almost indistinguishable from the surrounding districts. It sits on the south bank of the River Thames opposite Pimlico and the southern parts of Westminster in Middlesex, to which it is joined by Vauxhall Bridge. Today it is a mixed commercial and residential district.

The town has an odd distinction, of being the origin of the Russian word voksal, meaning a large railway station. It also gave its name to a pump manufacturing company which later became Vauxhall Motors.

Vauxhall's economy was for more than a century until the late 20th century predominantly manual workers' homes and business premises such as works for the local railway, a former water supply works heavily contrasting with the mixed and frequently higher professional occupations of neighbouring districts, particularly Kennington and Westminster. Similar to neighbouring Battersea a riverside redevelopment conversion into residential property, three acres of parkland and an iconic government building have re-characterized its architecture and altered its economy to resemble adjoining districts, retaining affordable and social housing particularly south-west of its station close to the South Western Main Line on land which was once heavy industrial and overcrowded terraces.

It is generally accepted that Vauxhall takes its name from Falkes de Breauté, the head of King John's mercenaries, who owned a large house in the area, which was referred to as Faulke's Hall, later Foxhall, and eventually Vauxhall.[1] The area only became generally known by this name when the Vauxhall Pleasure Gardens opened as a public attraction. Initially most visitors would have approached by river, but crowds of Londoners of all classes came to know the area after the construction of Westminster Bridge in the 1740s.

In the Russian language since the late nineteenth century a central railway station has been known as a вокзал (vokzal), and there are competing theories as to why, but it is generally accepted that the Russian word is from the name of Vauxhall in Surrey. It has long been suggested that a Russian delegation visited the area to inspect the construction of the London and South Western Railway in 1840, and mistook the name of the station for the generic name of the building type. This was further embellished into a story that the Tsar Nicholas I of Russia, visiting London in 1844, was taken to see the trains at Vauxhall and made the same mistake. The locality of the L&SWR's original railway terminus, Nine Elms Station, was shown boldly and simply as "Vauxhall" in the 1841 Bradshaw timetable.[2]

A perhaps more likely explanation is that it comes from the Vauxhall Pleasure Gardens. The first Russian railway, constructed in 1837, ran from Saint Petersburg via Tsarskoye Selo to Pavlovsk Palace, where extensive Pleasure Gardens had earlier been established. In 1838 a music and entertainment pavilion was constructed at the railway terminus. This pavilion was called the Vokzal in homage to the Vauxhall Pleasure Gardens in Surrey, and the name soon came to be applied to the station itself, which was the gateway that most visitors used to enter the gardens. From this familiar usage the wod voksal came to mean any substantial railway station building (a different Russian word, stantsiya, is used for minor stations). The word "voksal" (воксал) had been known in the Russian language with the meaning of "amusement park" long before the 1840s and may be found, for example, in the poetry of Aleksandr Pushkin: На гуляньях иль в воксалах / Легким зефиром летал (To Natalie (1813): "At fêtes and in voksals, /I've been flitting like a gentle Zephyrus". According to Vasmer, the word is first attested in the Saint Petersburg Vedomosti for 1777 in the form фоксал, which may reflect an earlier English spelling, Faukeshall. Englishman Michael Maddox established a Vauxhall Gardens in the Saint Petersburg suburbs (Pavlovsk) in 1783, with pleasure gardens, a small theatre/concert hall and places for refreshment. Archdeacon William Coxe describes the place as a 'sort of Vauxhall' in that year, in his 'Travels into Russia'. 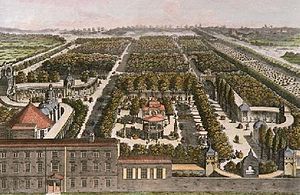 The New Spring Gardens in 1751

There is no mention of Vauxhall in the 1086 Domesday Book. The area originally formed part of the extensive Manor of South Lambeth, which was held by the de Redvers family.[3] Falkes de Breauté acquired it in 1216 when he married Margaret, widow of Baldwin de Redvers; de Breauté's lands reverted to the de Redvers family after his death in 1226.[3] In 1293 South Lambeth Manor and the Manor of "la Sale Faukes" passed, probably by trickery, to Edward I.[3] In 1317 King Edward II granted the manor of Vauxhall, Surrey, to Sir Roger d'Amory for his "good services" at the Battle of Bannockburn.

The land was flat and parts were marshy and poorly drained by ditches, and only started to be developed with the draining of Lambeth Marsh in the mid-18th century, but remained a village. Prior to this it provided market garden produce for the nearby City of London. Vauxhall Bridge and Vauxhall Bridge Road were opened in 1816. By 1860 the village had been subsumed by the town of Lambeth.[1] Many of Vauxhall's streets were destroyed during the construction of the railway to Waterloo station, by German bombing in Second World War or ravaged through poor city planning.

Much of the area in Vauxhall contains light industry, offices and government buildings. Many companies and organisations were attracted in the past by Vauxhall's central location and comparatively cheap rent compared to Westminster on the other side of the river. In recent years, Vauxhall's riverside has undergone major redevelopment with the construction of a number of modern residential and office blocks, most notably the distinctive MI6 building at Vauxhall Cross. There are also a number of new commercial businesses moving into the area including Bathstore, Topps Tiles Apolaki Krav Maga & Dirty Boxing[4] and Metropolis Motorcycles as well as proposals to redevelop the Sainsburys site.[5]

The MI6 headquateres at Vauxhall Cross

By Vauxhall Bridge is the central headquarters of the British Secret Intelligence Service (more commonly referred to as MI6), which occupies offices built between 1989 and 1992 and commonly referred to as Vauxhall Cross. More recently, a large complex of apartments and offices has been built to the south of Vauxhall Bridge at St George Wharf. Part of this development includes the St George Wharf Tower, completed in 2014.

The MI6 building has featured in several James Bond films, initially filmed without permission but then condoned by then Foreign Secretary Robin Cook with his memorable "After all James Bond has done for Britain..." quip. It is seen in GoldenEye, The World Is Not Enough (wherein it suffers a fictional terrorist attack that prefigured a genuine incident), Die Another Day and Skyfall (where it also comes under a fictional terrorist attack). Die Another Day featured a fictional London Underground station, Vauxhall Cross, a supposedly closed stop on the Piccadilly line now employed by MI6 as an extension to its HQ. In fact, the Piccadilly line does not come south of the river at all; only the Victoria line passes anywhere nearby, and the secret entrance to the station shown in the film is on the east side of Westminster Bridge, some considerable distance down river.

In Vauxhall too is Brunswick House, a listed Georgian mansion and former home to the Dukes of Brunswick. Built in 1758, it once stood in three acres of riverside parkland – now it sits overshadowed by the St George Wharf complex. The building was in a state of disrepair and was on the English Heritage 'Buildings at Risk' list until it was acquired in 2004 by LASSCO (The London Architectural Salvage and Supply Company) and restored as a premises from which to sell architectural salvage. It also has a restaurant and is an events venue.

St Peter's Church in Kennington Lane[6] was designed by the 19th century architect John Loughborough Pearson, who also designed Truro Cathedral and Brisbane Cathedral in Australia, as well as being responsible for restoration work at Rochester, Bristol, Peterborough, and Lincoln cathedrals. Today the church is a community centre and arts venue as well as a church. Next to St Peter's is Vauxhall City Farm.

Vauxhall Park[7] contains an area of miniature model houses (also in Fitzroy Gardens, Melbourne) as well as tennis courts, day care in the "one o'clock club", and children's playground. It is open daily for recreation and has an "open day" once a year.

Vauxhall City Farm, located within Vauxhall Pleasure Gardens is open daily and contains a range of animals including alpacas, sheep, goats and pigs.