Camberwell is a town in Surrey by the county's eastern boundary with Kent, which has become a suburb deep within the metropolitan conurbation.[1] Its character is as a built-up inner city district.

Camberwell appears in Domesday Book as Cambrewelle.[2] Springs and wells are known to have existed on the southern slope of Denmark Hill, especially around Grove Park.[3] The latter part of the name is simply the Old English word wielle, meaning "well", but the first element is uncertain. One theory is that it means "Welsh", which sees unlikely, or it may be "valley" ("coomb"), "comb" or "honeycomb". An alternative theory is that Camberwell is from an unknown root meaning "Cripple Well", where those suffering from leprosy or similar might come for treatment by the church and the clean waters from the wells.

The Camberwell Beauty is a butterfly (Nymphalis antiopa) which is rarely found in the British Isles. It is so named because two examples were first identified on Coldharbour Lane, Camberwell in 1748.

The Salvation Army's William Booth Memorial Training College, designed by Giles Gilbert Scott, was completed in 1932: it towers over South London from Denmark Hill. It has a similar monumental impressiveness to Gilbert Scott's other local buildings, Battersea Power Station and Tate Modern, although its simplicity is partly the result of repeated budget cuts during its construction: much more detail, including carved Gothic stonework surrounding the windows, was originally planned.

Camberwell is home to one of London's largest teaching hospitals, King's College Hospital with associated medical school the Guy’s King’s and St Thomas’ (GKT) School of Medicine. The Maudsley Hospital, an internationally significant psychiatric hospital, is also located in Camberwell along with the Institute of Psychiatry. 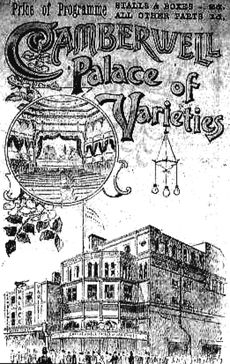 It was already a substantial settlement with a church when mentioned in the Domesday Book, and was the parish church for a large area including Dulwich and Peckham. It was held by Haimo, the Sheriff of Kent. Its Domesday assets were: 6 hides and 1 virgate; 1 church, 8 ploughs, 63 acres of meadow, woodland worth 60 hogs. It rendered £14. Up to the mid-nineteenth century, Camberwell was visited by Londoners for its rural tranquillity and the reputed healing properties of its mineral springs. Like much of north-eastern Surrey, Camberwell was transformed by the arrival of the railways in the 1860s.[3]

Early music halls in Camberwell were in the back hall of public houses. One, the "Father Redcap" (1853) still stands by Camberwell Green, but internally, much altered. In 1896, the Dan Leno company opened the "Oriental Palace of Varieties", on Denmark Hill. This successful venture was soon replaced with a new theatre, designed by Ernest A. E. Woodrow and with a capacity of 1,553, in 1899, named the "Camberwell Palace". This was further expanded by architect Lewen Sharp in 1908.[4] By 1912, the theatre was showing films as a part of the variety programme and became an ABC cinema in September 1932 – known simply as "The Palace Cinema". It reopened as a variety theatre in 1943, but closed on 28 April 1956 and was demolished.[5] The 1957 film The Smallest Show on Earth tells the tale of a struggling family-run suburban cinema, is thought to be based on the Palace. Nearby, marked by Orpheus Street, was the "Metropole Theatre and Opera House", presenting transfers of West End shows. This was demolished to build an Odeon cinema in 1939. The cinema seated 2,470, and has since been demolished.[6] A second ABC cinema, known originally as the Regal Cinema and later as the ABC Camberwell, opened in 1940. With only one screen but 2,470 seats, the cinema was one of the largest suburban cinemas in London and continued to operate until 1973, after which it was used as a bingo hall until February 2010. The building retains its Art Deco style and is Grade II listed.[7]

As well as the significant Camberwell College of Arts Camberwell is home to several art galleries including the South London Gallery and numerous smaller commercial art spaces. The annual Camberwell Arts Festival is well supported.

The Blue Elephant Theatre on Bethwin Street is the only theatre venue in Camberwell. [8]

In 1840, Thomas Hood, the humorist and social reformer (author of The Faithless Nellie Grey amongst other comic poems and of the grim Song of the Shirt) lived in Camberwell for two years; initially at No. 8, South Place, (now 181, Camberwell New Road). He later moved to No. 2, Union Row (now 266, High Street). He wrote to friends praising the clean air. In late 1841 he moved to St John's Wood [9] The Victorian art critic and watercolourist, John Ruskin lived at 163 Denmark Hill from 1847, but moved out in 1872 as the railways spoiled his view. Cite error: Invalid <ref> tag; invalid names, e.g. too many. Ruskin designed part of a stained glass window in St Giles' Church, Camberwell [10] Ruskin Park is named after him, and there is also a John Ruskin Street.