Peckham is a town in north-eastern Surrey, deep within the metropolitan conurbation. It is contiguous with Dulwich to the south; Nunhead to the south-east; New Cross to the east; Bermondsey to the north; and Camberwell to the west. Peckham is one of the most ethnically diverse and deprived towns in the country and is notorious for its high levels of crime.

"Peckham" is a Saxon place name meaning the village of the River Peck, a small stream that ran through the district until it was enclosed in 1823. Archaeological evidence indicates earlier Roman occupation in the area, although the name of this settlement is lost.

Peckham appears in Domesday Book of 1086 as Pecheham. It was held by the Bishop of Lisieux from the Bishop of Bayeux. Its Domesday assets were: 2 hides. It had land for 1 plough, 2 acres of meadow. It rendered £1 10s 0d.[1]

The manor was owned by King Henry I, who gave it to his son Robert, Earl of Gloucester. When Robert married the heiress to Camberwell the two manors were united under royal ownership. King John probably hunted at Peckham and local anecdotes suggest that the right to an annual fair was granted to celebrate a particularly good day's sport. The fair grew to be a rowdy major event lasting three weeks until its abolition in 1827.

Peckham became popular as a wealthy residential area by the 16th century and there are several claims that Christopher Wren had local links. By the 18th century the area was a more commercial centre and attracted industrialists who wanted to avoid paying the expensive rents in central London. Peckham also boasted extensive market gardens and orchards growing produce for the nearby markets of London. Local produce included melons, figs and grapes. The formal gardens of the Peckham Manor House, rebuilt in 1672 by Sir Thomas Bond were particularly noticeable and can be seen on the Rocque map of 1746. The manor house was sacked in 1688, as its then owner Sir Henry Bond was a Roman Catholic and staunch supporter of James II. The house was finally demolished in 1797 for the formation of Peckham Hill Street, as the Shard family developed the area. Today Shard's Terrace, the block that contains Manze's Pie and Mash shop, and the western side of Peckham Hill Street represent this Georgian planned expansion.

The village was the last stopping point for many cattle drovers taking their livestock for sale in London. The drovers stayed in the local inns (such as the Red Cow) while the cattle were safely secured overnight in holding pens. Most of the villagers were agricultural or horticultural workers but with the early growth of the suburbs an increasing number worked in the brick industry that exploited the local London Clay.

In 1767 William Blake visited Peckham Rye and had a vision of an angel in a tree. In 1993, at the request of the Dulwich Festival, artist Stan Peskett painted a mural of Blake's vision next to the Goose Green playground in East Dulwich. 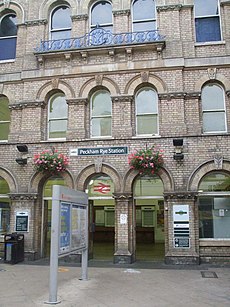 At the beginning of the 19th century, Peckham was a "small, quiet, retired village surrounded by fields". Since 1744 stagecoaches had travelled with an armed guard between Peckham and London to give protection from highwaymen. The rough roads constrained traffic so a branch of the Grand Surrey Canal was proposed as a route from the Thames to Portsmouth. The canal was built from Surrey Commercial Docks to Peckham before the builders ran out of funds in 1826. The abbreviated canal was used to ship soft wood for construction and even though the canal was drained and backfilled in 1970 Whitten's timber merchants still stands on the site of the canal head.

In 1851 Thomas Tilling started an innovative omnibus service from Peckham to London. Tilling's buses were the first to use pre-arranged bus stops, which helped them to run to a reliable timetable. His services expanded to cover much of London until his horses were requisitioned for the Army in the First World War.

Before Peckham Rye railway station was opened in 1865 the area had developed around two centres: north and south. In the north, housing spread out to the south of the Old Kent Road, including Peckham New Town, built on land owned by the Hill family (from whom the name Peckham Hill Street derives). In the south, large houses were built to the west of the common land called Peckham Rye and the lane that led to it. 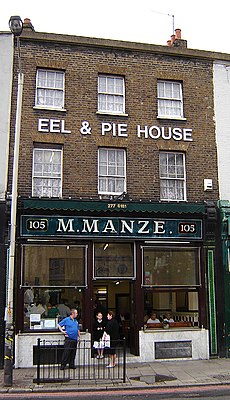 With the arrival of the railway and the introduction of horse-drawn trams about ten years later, Peckham became accessible to artisans and clerical staff working in the City and the docks. Housing for this socio-economic group filled almost all the remaining fields except the Rye. In 1868 the vestry of Camberwell St Giles bought the Rye to keep it as common land. Responding to concerns about the dangerous overcrowding of the common on holidays the vestry bought the adjacent Homestall Farm (the last farm in the area) in 1894 and opened this as Peckham Rye Park.

With the influx of younger residents with money to spend Rye Lane became a major shopping street. Jones & Higgins opened a small shop in 1867 (on the corner of Rye Lane and Peckham High Street) that would become the best known department store in South London for many years. It closed in the 1980s. In 1870 George Gibson Bussey moved to Peckham and set up a firm described as "Firearms, Ammunition & Shooting” at the Museum Works, Rye Lane, Peckham. The Museum of Firearms was built in 1867. The Ordnance Survey Map of 1868 shows the museum building with a rifle range at the rear extending along the side of the railway embankment for 150 yards.

The late 19th century also saw the arrival of George Batty, a manufacturer of condiments, whose main business stood at Finsbury Pavement. The company's Peckham premises occupied 19 railway arches. It was acquired by the H. J. Heinz Company in 1905 as their first UK manufacturing base.

The southern end of Peckham was the location for the railway line that once served the Crystal Palace in Sydenham. Though the line was eventually dismantled due to the collapse of the embankment into the gardens of Marmora Road it is still possible to see large sections of it. The flats on Wood Vale and the full length of Brenchley Gardens trace its route.

Marmora, Therapia, Mundania and Scutari Roads, built in the 1880s, all derive their curious names from locations now in modern-day Turkey, possibly from associations with the stationing of British forces there during the Crimean War. Close by is the Aquarias Golf Club,[2] which is located over the cavernous Honor Oak Reservoir constructed between 1901 and 1909. When it was completed it was the largest brick built underground reservoir in the world[3] and is still one of the largest in Europe.[4] The reservoir now forms part of the Southern extension of the Thames Water Ring Main.

Camberwell Old Cemetery, on Forest Hill Road, is a later example of the ring of Victorian cemeteries that were built to alleviate the overcrowding of churchyards that was experienced with the rapid expansion of London in the 19th century. The Stone House at its main entrance was used in the filming of Joe Orton's Entertaining Mr Sloane (released 1970). It was gutted by fire in the mid-1970s and rebuilt some years later. Camberwell Old Cemetery did not have the grandeur of nearby Nunhead Cemetery, which was one of the original London necropoleis, and once nearing capacity it was replaced by Camberwell New Cemetery on Brenchley Gardens.

Brenchley Gardens Park follows the route of the old line to the Crystal Palace culminating at the High Level station. The park runs behind Marmora Road and the remains of the embankment then continues along Wood Vale where flats were built on it. The line was closed in 1954 following a decline in its use after the destruction of the Crystal Palace in 1936 and due to slippage in the structure of the embankment.[5]

In the 1930s George Scott Williamson and Innes Pearse opened the Pioneer Health Centre in Queens Road. They planned to conduct a large experiment into the effect of environment on health. 'The Peckham Experiment' recruited 950 families at one shilling a week. The members joined something like a modern sports club with facilities for physical exercise, games, workshops and socialising with no mandatory programme. The centre moved into a purpose built modernist building by the architect Sir Owen Williams in 1935.

North Peckham was heavily redeveloped in the 1960s, consisting mainly of high-rise flats to rehouse people from dilapidated old houses. It was popular on its completion for offering a high quality and modern standing of living. However, high unemployment and a lack of economic opportunities led to urban decay and a period of decline in the late 1970s. The North Peckham Estate became one of the most deprived residential areas in Western Europe. Vandalism, graffiti, arson attacks, burglaries, robberies and muggings were commonplace, and the area became an archetypal London sink estate. As a result, the area was subjected to a £290 million regeneration programme in the late 1990s and early 2000s. By 2002, 90% of the redevelopment was complete. The new homes were better laid out and offered improved security, though few local people were convinced that better housing would equate to a better area.

In the early 1990s Peckham was a centre of underground music partly due to a large squat known as The Dolehouse in a disused, two-storey DHSS building near Peckham High Street.[6] The building was already known for having featured in the cover shot of a 1980s pictorial biography of 1960s' mods, featuring them on their customised scooters outside the then Camberwell Labour Exchange. In 1989 the squatters adopted the name Dole House Crew and along with another local group of squatters called the "Green Circus", held regular gigs/parties in the building. Upstairs was a large live gig room and downstairs was a rave music DJ set up. There were also two bars, a vegan cafe and a chill out lounge. During the week, any empty rooms were utilised for bands or artists.

This Surrey article is a stub: help to improve Wikishire by building it up.
Retrieved from "https://wikishire.co.uk/w/index.php?title=Peckham&oldid=58075"
Categories: