Gildersome is a village in the West Riding of Yorkshire, five miles south-west of Leeds city centre. It sits midway between Leeds, Wakefield and Bradford, close to Morley.

The M621 motorway spurs of the M62 motorway at Gildersome (junction 27). The A62 Leeds to Huddersfield (Gelderd Road) also runs by the village.

Gildersome is a local centre with a range of village shops, a library, doctor's surgery and the usual range of eateries and a general store.

The village has two primary schools. Gildersome Primary School was formed from a merger of two schools in 1884 which had both been burnt down in the '70s and '80s, so it has adopted a phoenix as its emblem.

The war memorial stands on the village green. 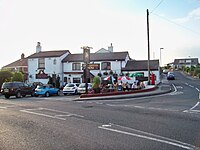 The earliest known reference to the area occurred in 1249, when the name was spelt Gilhusum.[1] According to historian Armitage Goodall, the name is likely derived from the northern dialect word gill meaning "stream", "ravine", or "narrow valley" and the Old Norse word husum ("houses", dative plural, which is also Old English).[1]

There is a a persistent rival theory,[2] that Gildersome is a corruption of a Dutch place name such as "Guelderzoom" and derived from immigrants from Guelderland arriving at some time between the 16th and 18th centuries. According to Goodall and other historians hold that this is almost certainly incorrect,[1] and indeed the name is found three hundred years before the days of the conjectured Guelderlanders.

The first church in the village was a chapel built in 1707, and which is now Gildersome Baptist Church. It was built for public worship with an intended capacity of 250 people. In 2007 there were many celebrations and events to coincide with the 300th year anniversary of the original place of worship.

In 1866, for a cost of approximately £2,000, a new chapel was built, much larger than the original. It was opened on 2 May 1866, and the original building remains. However in recent years, the church was redeveloped, with the adjoining halls and facilities being converted into flats. The original hall was renovated, with a new and modern interior and brand new facilities. Through grants, volunteering schemes and assistance from various sources, the graveyard has also been converted into a community garden, which encourages local school children to learn more about the environment and nature.

In 1663, just three years after the Restoration of King Charles II, Gildersome became the centre of a Puritan plot, known as the Farnley Wood Plot after the woodland where the conspirators met. The plotters intended to raise an army to take over the city of Leeds and other strongholds in Yorkshire: their declared intent was to overthrow King Charles II "to re-establish a gospel ministry and magistracy; to restore the Long Parliament; to relieve themselves from the excise and all subsidies and to reform all orders and degrees of men, especially the lawyers and clergy". Their army did not materialise, the conspirators were betrayed and their plan failed in ignominy before it began. Many of the plotters came from Gilderstone. Those arrested were held captive at York: three who managed to escape were brought back to Leeds for immediate execution. 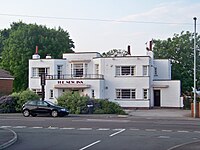 Turton Hall in Gildersome (now three residential dwellings) was a prominent and wealthy school, for higher education pupils, during the 1700s. It is said that preacher John Wesley visited and preached in the dining room. The hall returned to private ownership in 1879, and remains a Grade II listed building.

Gildersome also used to have two fully functioning railway stations. One was on the GNR line from Wakefield to Bradford which ran at the turn of the 20th century, and it was located at the crossroads at the top of the village (towards Morley). This station closed in 1962 along with Drighlington and Adwalton. In the recent roundabout replacements a tunnel on the GNR line was uncovered and then resealed. The second railway station was on Rooms Lane and was on the Leeds to Huddersfield LNWR "Leeds New Line" opened in 1900. This station closed in 1923 to passengers. Gildersome Tunnel (LNWR) was recently visited by the L.H.E.S. [3] 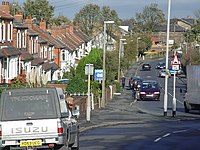 Gildersome has changed beyond recognition in 100 years, when the village was a thriving mining community with many local pits. A lot of the original mining locations remain, such as the 'brownhills', a large area of land which separates Gildersome from neighbouring Drighlington. The provisions created for the miners, including the increased number of housing remain today, including the town houses and terraces built on Street Lane. A lot of the land has subsequently been redeveloped. The land on which Mill Lane and its subsequent housing now sits was, as the name suggests, a large industrial area, with Maiden Mills built on the site. Originally, there was a flax mill, but during an incident in 1914, the mill burnt down, and a new one was built.

On 4 February 1974, the village and surrounding area gathered widespread national attention when a bomb planted by the IRA exploded in a coach on the M62 here: 12 people including soldiers and members of their families, died in the M62 coach bombing.

In the 1990s, much former industrial land in Gildersome was cleared and re-developed for housing.

Gildersome has a largely sporting community.

There is a playground next to the library.