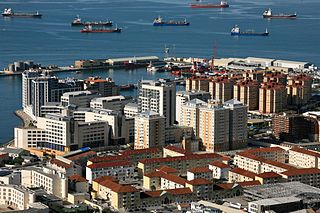 The Port of Gibraltar

Gibraltar Harbour is a busy seaport serving Gibraltar, stretching along much of the west side of the territory and in particular the water enclosed by man-made moles.

The harbour was a strategically important location during the Napoleonic Wars and after 1869 served as a supply point for ships sailing for India through the Suez Canal.[1] 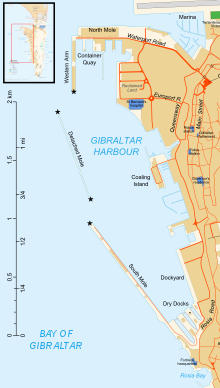 The harbour is enclosed by three "moles" built out into the Bay of Gibraltar, which serve as breakwaters and wharves:

The North Mole predates British possesion of Gibraltar, having been built in an early form during the Spanuish interlude of Gibraltar's history. It has been greatly extended though by the Royal Navy and supplemented by the South and Detached Moles. 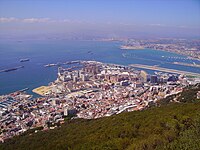 The North Mole from the Rock

The North Mole encloses the northern section of Gibraltar Harbour. It is the oldest of the three moles, and the only one to predate Britain's possession of Gibraltar. It was formerly known as the Commercial Mole, and is still the site of the commercial port in the harbour. The currrent form of the North Mole is the consequence of a late nineteenth century plan by the Admiralty to create a modern dockyard and large defensive harbour in Gibraltar. 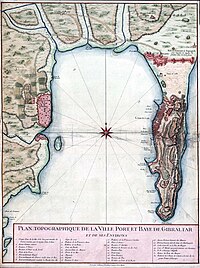 The Old Mole was begun in 1618 during the Spanish period, and its extension, the Devil's Tongue Battery, which was constructed between 1779 and 1783,[2] to create the Commercial Mole, or North Mole.

By 1895, government plans to modernize Gibraltar Harbour included construction of a dry dock at the New Mole Parade, assisted by extending the mole and constructing a Detached Mole. At that time, the method of enclosing the northern end of the harbour had not yet been decided and was a matter of some controversy.[3] Nevertheless, the development went ahead, also fortifying the harbour and protecting it from potential torpedo attacks. The new breakwater included five jetties which extended north and south and it ended in the Western Arm which paralleled the jetties. The jetties and Western Arm were lined with a concrete wharf wall. By 1902, much of the construction of the new Gibraltar Harbour had been completed, although portions were still under construction, including the extension of the New Mole. While the Commercial Mole was intended to facilitate Gibraltar commerce,[4] by 1911 it was primarily utilised by the navy as a quay for destroyers.[2]

The mole today is L-shaped, its Western Arm running south toward the Detached Mole,[5] and measures 550 yards in length. The northern section of the harbour it protects contains the commercial port, which has a total length of 2,500 yards of quay on the North Mole for cruise ships, cargo handling, and bunkering.[6] Fifteen berths are available,[7] including six on the Western Arm and two on an extension jetty.[6]

On the afternoon of 31 May 2011, an oil storage tank exploded at the North Mole, triggered by two workers welding on top of the tank. Remarkably, the welders survived, burnt, but also twelve passengers on the cruise ship MS Independence of the Seas berthed at the North Mole were injured. An adjacent tank caught fire that evening, driving off the firefighters.[8]

On 8 June 2012, a bunkering accident off the North Mole resulted in an oil spill, with the release of three tons of fuel into the sea. The Gibraltar Oil Spill Contingency Plan was activated and, by the following day, most of the spilled oil had been contained.[9]

The Detached Mole is the most recent of the three moles enclosing Gibraltar Harbour, having been built between 1888 and 1901 as part of the plan to modernise the harbour facilities and fortify the port.[10][11] lies at the western aspect of the middle section of the harbour.[6][2] It is 875 yards in length.

The Detached Mole was constructed of concrete blocks, each weighing 28 tons. The wall was built upon a foundation of rubble stone that was first deposited by barges and then leveled by divers before the placement of the concrete blocks.[2]

In 1888, the SS Excellent sank off the Detached Mole after several collisions. The wreck has split in two, and the ship is upside down on the sea bed. The wreck of the steel-clad steamship is now a popular dive site.[10][13] On 18 January 1942, the Erin, an anti-submarine trawler, was sunk by an explosion in Gibraltar Harbour. The Imperialist and Honjo were also severely damaged. It was eventually learned that the explosion on the Erin was the result of sabotage: a Spaniard who worked in the naval dockyard had packed a bomb inside one of the ship's depth charges. It is believed that the remains of the trawler were dragged through the north entrance to the harbour and dumped outside the Detached Mole. 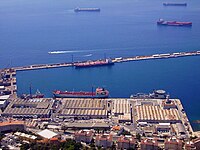 The South Mole from the Rock

The South Mole encloses the southern section of Gibraltar Harbour. It was previously known as the 'New Mole' and 'New Mole Extension'. It is 1,200 yards long.

The Gibdock shipyard and Royal Naval base are in the southern section of the harbour,[6] the wharfage of the shipyard including 1,427 feet of the South Mole. Repair berths along the breakwater can accommodate vessels up to 150,000 deadweight tonnage (dwt).[14]

During construction in the 1880s, a railway and two new tunnels were created to take large quantities of quarried stone to assist in the Mole's creation. One of these tunnels was by Camp Bay and the other was under the Parson's Lodge Battery.[15]

The South Mole was formerly known as the New Mole and New Mole Extension, to distinguish it from the Old Mole at the northeastern corner of the harbour. Construction of the New Mole was begun by the Spanish in 1620. It underwent extension a variety of times, eventually reaching a length of 1,400 feet, built of rubble stone. The New Mole Extension of 2,700 feet was added about the turn of the twentieth century. In 1916, the length of the south entrance to the harbour was reported to be 600 feet. At that time, coal stores lined almost the entire length of the South Mole.[16]

In 1916, the SS Rosslyn, a steamship of more than 3,600 tons out of Liverpool, Lancashire, having discharged her cargo at Muros in Spain, set a course for Gibraltar, instructed to anchor off the South Mole, outside the harbour. On 26 February gale force winds repeatedly dashed the ship against the recently completed South Mole. Despite the efforts of tugs provided by the Royal Navy and the Gibraltar Harbour authority, the ship sank off the South Mole.[17][18] The Gibraltar Chronicle of 1 March 1916 reported:[19]

The Cardiff steamer Rosslyn, of 3,679 tons gross, in ballast, dragged her anchor on Monday afternoon and was driven by the South-West gale on to the new Mole Breakwater. The dangerous plight of the vessel was at once seen and two Government Tugs immediately went to her assistance and made several attempts to tow her off, but as the gale was increasing every moment, after taking off the crew, they gave up their efforts and brought the men safely to harbour. Owing to the battering received by the high seas, the Rosslyn foundered yesterday morning, only part of her masts being now visible above water.

The Rosslyn was the largest wreck in Gibraltar and is now a popular site with divers.[18]

From Britain's capture of Gibraltar in 1704, it became a port of great strategic importance, providing a base from which the Royal Navy could operate in the Mediterranean Sea and to control the gateway between the Mediteranean and the Atlantic Ocean.

Gibraltar also provided a commercial port for worldwide British trade. In February 1706, just two years after it had been secured, and long before the treaty ceding Gibraltar to Great Britain, Queen Anne made the Port of Gibraltar a free port, and this simple decision had a major economically impact.[23] As a free port, vessels from all lands could trade without paying tax, and thus the ships of North Africa, Turkey, Italy and beyond could trade their goods freely. This decision made the port of Gibraltar one of the most important ports in Europe vessels from all over the world came to trade their goods to the port of Gibraltar, which has continued to this day.

It is the port which drove not only the prosperity of Gibraltar but also created its population, as workers came from Britain, Malta, Genoa, Minorca and North Africa to work and to settle.

The harbour of Gibraltar was transformed as a result of the Government "Two Power Standard" for the Royal Navy, which required that the Royal Navy not only remain the largest in the world, but that it should exceed the next two powers' navies combined. Both Gibraltar and Malta were made torpedo-proof, and as a result the North Mole and South Mole were extended and the Detached Mole was constructed. Three large dry docks were constructed and plans were available by 1894. Over 2,000 men were required and they had to be billeted in old ships which had not been required since convict labour was abandoned. The demand for stone and sand necessitated building the Admiralty Tunnel right through the Rock of Gibraltar.[24]

In 1903, King Edward VII arrived to name the new No. 3 Dock of the new Gibraltar Harbour after himself.[24] Queen Alexandra arrived in HMY Victoria and Albert in 1906 and the Prince and Princess of Wales the following year to name dock number two and then one after themselves.[24]

The modern Port of Gibraltar

Today, the Port of Gibraltar is one of the most successful and modern ports in Europe, providing both commercial and naval facilities, and oil bunkering as a major business. At a major world trade hub at the joining of two seas, it serves cargo ships, cruise ships and warships: an estimated 71,000 vessels transit the Strait of Gibraltar each year, and Gibraltar Harbour is one of the few ports able to provide a full service to vessels of all sizes and types.[26]

The main business of the port today is bunkering: an estimated 4.2 million tons of fuel were delivered to the port in 2011.<name=auth/> This allows companies located in the port to supply thousands of ships with all grades in marine fuel to maintain the ships. Container ships also moor in the harbour to discharge their cargo in Gibraltar for it to be transported into Europe, and as the harbour is accessible at all tides, it is busy day and night.

Companies like Oldenburg-Portugiesische, Dampfschiffss-rhederei, and OPDR have been supplying cargo to Gibraltar since 1892. Nevertheless, nowadays the port suffers from the competition of the Port of Algeciras in Spain and the Port of Tanger-Med in Morroco, which have developed more capacity and have taken some of the transit traffic. Cruise ships are one of the main sources of income to the port with some 300,000 cuise passengers stopping at Gibraltar each year.