From Wikishire
(Redirected from Frays River)
Jump to: navigation, search 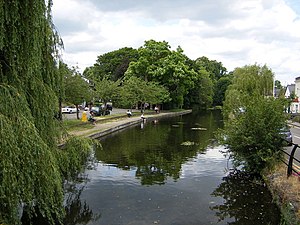 The river in Uxbridge

The river from the aqueduct on the Slough Arm

Fray's River is an apparently man-made river at the western edge of Middlesex, which branches off the River Colne at Uxbridge Moor and rejoins it at West Drayton.

The Fray's River leaves the River Colne between Uxbridge and Denham, Buckinghamshire at Denham Weir. It passes Cowley and Yiewsley where it is joined by the River Pinn. It is also crossed by the Slough Arm of the Grand Union Canal which is carried over the river on an aqueduct.

The Fray's River rejoins the River Colne at West Drayton.

The Frays River is believed to be a man-made diversion of waters from the River Colne to feed watermills around Uxbridge. The name is originates from John Fray who owned Cowley Hall beside the river in the fifteenth century. Other names for the river are the Uxbridge and Cowley Mill Stream, the Cowley Stream or the Colham Mill Stream. In the 17th century the river powered five mills.[1]

Drayton Mill at West Drayton was mentioned in Domesday Book and was used for flour milling, paper-making and the manufacture of millboard. It ceased operation in about 1923.[2]

The Frays River is a natural habitat for plants and wildlife[3] and Frays Island between the Frays and the River Colne is a Site of Metropolitan Importance managed by the London Wildlife Trust.[4]

George Orwell once taught at Frays College, which was on the banks of the Frays River and was named after it.[5]