Denham is a village in Buckinghamshire, consisting of the original village and several scattered villages and hamlets within the parish. Denham lies in the south of the county, on the border with Middlesex, in which is found the nearest large town, Uxbridge.

The tree-lined Village Road includes several old red brick houses with giant wisterias on them, and has been used as a location in British films and television.

The parish's eastern boundary with Middlesex is formed by the original line of the River Colne, which is a little obscured by the Grand Union Canal which runs parallel.

The village's name comes from the Old English Deneham meaning "valley homestead" ("dene-home"). It was listed in the Domesday Book of 1086 as Deneham. 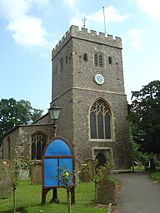 Saint Mary's in Denham Village has a flint and stone Norman tower and Tudor monuments.

The parish is also served by St Mark's in Denham Green.

Housing growth has over the years created new parts to Denham. Instread of expanding the original village, these twentieth century developments have grown up as separated hamlets and villages, though borrowing the name of the village for themselves. Modern-day Denham consists of: 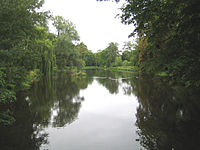 The Misbourne at Denham Place Lake

Denham or Denham Village TQ043870 is the original village. It is found on a winding lane, Village Lane, east of the A412. The River Misbourne crosses the A-road and then on to Village Road at Denham Place.

Denham Place stands at the entrance to the village, a grand manor house.

Denham Village is itself divided; the older part all along the winding Village Road, while lining the A40 Oxford Road are new houses. The two parts are not quite physically contiguous, being separated by the Misbourne and looking in opposite directions.

Denham Garden Village TQ043870 is to the north of Denham Green Lane, and is dominated by a development for retirement housing.

Denham Green TQ040879 is the modern village development which grew up around Denham railway station station and on the A412. A parade of the shops stands beside the station.

Denham Film Studios, founded by Alexander Korda, were sited between the junction of the Rickmansworth Road and Moor Hall Road towards Harefield, which provided some employment. The site has now been converted is now used as a business park (Broadwater Park).

Higher Denham TQ028878 is a hamlet gathered around Denham Golf Club station, next on the line west of Denham station. It was built on the site of a First World War army training and transit camp. After the War, the camp land was sold off piecemeal for housing, following a similar trend all over Metro-land.

Baker's Wood TQ027869 lies further up the A40 Oxford Road towards Gerrards Cross, below Tatling End. 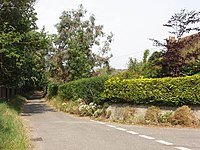 Denham Mount TQ026866 is a hamlet, a scattering of houses along the @ on the modest hill above Tatling End, south of the Oxford Road.

Tatling End 020872 stands is on the Oxford Road, west of the junction with the A412, at the top of the hill leading out of the Misbourne Valley 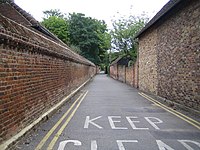