From Wikishire
(Redirected from River Carron (Forth))
Jump to: navigation, search 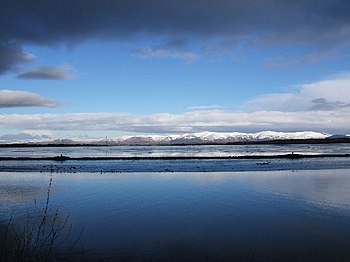 The Ochil Hills from the Carron

The River Carron is a river in Stirlingshire that empties into the River Forth. The river bears a name commonplace in the north: the 'River Carron' is a name borne by rivers from Dumfriesshire to Ross-shire. The Stirlingshire river though is the one which has spread the name widest: it has given a name to towns and villages along its banks and to a variety of regional features, and also to a type of cannon, a line of bathtubs, two warships and an island off the west coast of Australia.

The river rises in the Campsie Fells before flowing into the Carron Valley Reservoir.

Below the reservoir, the Carron passes by Denny, then between Larbert and Falkirk past the villages of Carron and Carronshore, before flowing into the Firth of Forth near Grangemouth.

The Carron Bridge crosses the Carron at the eastern extremity of Strathcarron Forest. It was built in 1695 to replace a ford that had existed for many hundreds of years as part of an old drove road from Kilsyth to Stirling. This bridge, with its two span stone arches, looks larger than it needs to be because the river was much larger before Carron Dam was built to create a reservoir in the 1930s.

The river is thought by some to be the "Itys" described by Ptolemy in his Geographia, an extensive 2nd century compilation of geographical knowledge.[1]

Nennius, the Welsh historian of the 9th century, believed the name of the Carron was derived from Carausius, the 3rd century Roman commander who declared himself emperor of Britannia and northern Gaul.[2]

In the Dark Ages this was a frontier region: the Anglo-Saxon Chronicle calls the river Cære and reports that in 710 the Ealdorman Beorhtfriþ fought the Picts between the Carron and the Avon.[3]

According to the Ossian poems of James Macpherson, the waterway's name is Gaelic in origin and means "winding river". Another etymology which is as plausible is that the river's original name was is derived from the Brythonic word "Caeravon" (or perhaps Avon Caerau) meaning "river of the caers" alluding to the Roman fortifications built on its banks as a barrier between their territory and that of the Picts.[2]

In the 17th century, William Nimmo described the river and region as follows:

The whole length of its course, from west to east, is some 14 miles, the first half of which is spent among bleak hills and rocks, but, when it has reached the low grounds, its banks are fertile and wooded, and, as it advances, the neighbouring soil increases in richness and value. ..The stream is small comparatively, yet there is no river in Scotland whose surroundings have been the scene of so many memorable events.

...A short distance from its source, the river enters the Carron Bog. This vast plain and meadow... [is] Considerably elevated above the ocean, it occupies part of the table-land between the eastern and western coasts. It has, probably, been a lake at no very distant period, and gradually filled by the hill brooks washing down debris. Part, indeed, is a swamp scarcely passable at any time, but nearly inundated by every heavy rain.


...in the division called Temple Denny, the Carron, having worn a hollow channel in the rock, forms a beautiful cascade, by pouring its contracted stream over a precipice above 20 feet in height. ..When the river is in flood, and a triumphant torrent sweeps down the glen, this cascade is unsurpassed among Scottish streams for the grandeur of its storm of spray. ..Over the serpentine road down-hill to Denny the spirit of beauty everywhere prevails. The intervening district, indeed, is famous for its pastoral undulations; and from almost every breezy brae-top a charming view is got of the wooded banks of the river – foliage which, even in the present green-tide, displays all the variety of autumnal richness.[2]

The river is also referred to in the Scots language song "Lads O' the Fair":

For ye can see them a', the lads o' the fair
Lads frae the Forth an' the Carron Water
Workin' lads an' lads wi' gear
Lads that'll sell ye the provost's dochter
Sogers back frae the German Wars
Peddlers up frae the Border

The terrain in and around Strathcarron is rough and scenic. Mountains jut skyward from the landscape. As such, the region attracts birdwatchers, anglers, geocachers and orienteering enthusiasts, hikers, hill and mountain climbers, hunters mountain bikers, photographers and sight-seers.

The thousand acre Strathcarron Reservoir, otherwise known as Strathcarron Loch, was completed in 1939 and it is one of the most scenic trout fisheries in the Central Lowlands. High in the Campsie Fells yet only twenty minutes from Stirling and half an hour from Glasgow, the loch offers scenic vistas and fly fishing for a combination of wild trout and trout stocked by Carron Valley Fishery.[5]

The reservoir has proved to be an ideal habitat for the Carron's indigenous brown trout population. Thriving on the rich feeding of the newly flooded valley and with easy access to its many excellent spawning and nursery streams, the "wild brownies" of Strathcarron Reservoir are numerous.[5]

Named from the river

The Carron Company (also known as the "Carron Works") was an ironworks established in 1759 on the north bank of the River Carron two miles north of Falkirk. This company was at the forefront of the Industrial Revolution in the United Kingdom.[6]

The company's local coal mining operations were known as the "Carron Collieries". The villages of Carronhall and Carronshore contained dwellings for miners and factory workers. This area was serviced by the Carron Branch Railway.[6]

One of the factory's products was the naval cannon known as the carronade. These big guns, thus indirectly named from the river, were used by the Royal Navy during in Napoleonic Wars, including the Battle of Trafalgar, and saw action too in the naval battles of the American Civil War.[7]

Carron Company was broken up in 1982 and various parts of the company closed down, Carron Bathrooms Ltd who manufacture Acrylic Baths and shower trays, and Carron Phoenix who manufacture kitchen sinks, are still in existence, taking the river into houses up and down the land.

HMS Carron was planned as a Loch class frigate but the design was changed and she was renamed "HMS Gerrans Bay" in mid-construction. Completed in 1944, she served in Second World War and eventually ended up as HMS Surprise, a Bay class frigate.[8]

The USS Carronade (named after the cannon that was named after the river), was a ship of the United States Navy that was completed in 1955. Finished too late to serve in the Korean War, she was taken out of service but re-commissioned for the Vietnam War. She was decommissioned again in 1969.[9]

In July 1916, HMAS Encounter was on wartime patrol and came to a small island on the northern coast of Western Australia where the crew discovered two bronze cannons standing six feet apart and pointing into the air.[10][11]

At the time these guns were thought to be carronades, so the island on which they had been found was named Carronade Island after this discovery. Scientists at the Western Australian Museum in Fremantle have recently made a detailed analysis and have determined that these weapons are almost certainly of Indian rather than European, origin, but the island retains the name brought from the river on the other side of the world.[10][11]