Maryhill is a Lanarkshire town which has become an area of the City of Glasgow. Its population is estimated at about 52,000.

The far north west of the area is served by Maryhill railway station. 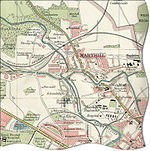 Hew Hill, the Laird, or Lord, of Gairbraid, had no male heir and so he left his estate to his daughter, Mary Hill (1730-1809). She married Robert Graham of Dawsholm in 1763, but they had no income from trade or commerce and had to make what they could from the estate. They founded coalmines on the estate but they proved to be wet and unprofitable, and their property ventures are best known for an acre of ground they did not sell. It is still known as Acre today.

The Grahams' struggle was ended when in 1768 Parliament approved the cutting of the Forth and Clyde Canal through their estate, which provided some much-needed money. The canal reached the estate in 1775, but the canal company had run out of money and work stopped for eight years. The Government granted funds from forfeited Jacobite estates to start it again and the crossing of the River Kelvin became the focus for massive construction activity. Five locks, the great Kelvin Aqueduct and, between two of the locks, a dry dock boatyard were built. A village too began to grow up and the Grahams fed more land for its development; Robert Graham attached one condition that was to immortalise the heiress of Gairbraid, his beloved wife and the last in line of centuries of Hills of Gairbraid after the death of her father Hew Hill. The then village was to be "in all times called the town of MaryHill".

The new canal waterway attracted industries including; boat-building, saw-milling and ironfounding to its banks within Mary's estate. By 1830 the scattered houses had grown to form a large village with a population of 3,000 people. The building of the Glasgow, Dumbarton and Helensburgh Railway passing through Maryhill in the 1850s, and the proximity of the Loch Katrine pipeline, led to further growth and in 1856 Maryhill became a burgh in its own right. It was later absorbed into the city of Glasgow's boundaries in 1891.

A part of the Antonine Wall runs through Maryhill, in the Maryhill Park area, where there is the site of a Roman fort adjoining the wall in nearby Bearsden.

Maryhill had the first Temperance Society in the United Kingdom after lawlessness filled the streets in the Victorian era.

Maryhill Barracks was opened in 1872 and once dominated the area that is now the Wyndford housing estate. It was home to the Scots Greys and the Highland Light Infantry, and famously held Adolf Hitler's second-in-command Rudolf Hess during Second World War after his eccentric flight to Britain during the War.

The barracks were decommissioned in the early 1960s. However the Territorial Army unit, the 52nd Lowland, 6th Battalion, the Royal Regiment of Scotland continues to be based at the adjacent Walcheren Barracks. 32 (Scottish) Signal Regiment is also based near Kelvinside, with 105 Regiment, Royal Artillery in nearby Partick.

Maryhill was known as the Venice of the North for its canals and also for being the centre of the glass industry, with its Caledonia Works and Glasgow Works.

Many areas in the north of Glasgow are below the average standard of living. However, not all areas of North Glasgow are in poor condition. Maryhill is in the north west of the city, and consists of well-maintained traditionally "Glaswegian" sandstone tenements with the traditional high ceilings as well as many large Victorian town houses. There are also large housing association-run housing estates. Although historically a working class area, it is relatively wealthy compared to the rest of the north of the city, containing a large student population as well as a large number who could be described as middle class. It is home to a large variety of people who work in the media, politicians, doctors and lawyers as well as working class citizens.

The district contains the Wyndford and Gairbraid estate, a housing estate with a population of almost 5,000, containing a number of high-rise housing blocks, the highest four reaching heights of 26 storeys. These are intermixed with lower residences to create an estate of significant housing contrast and variety.

The Forth and Clyde Canal by Ruchill Church

The Forth and Clyde Canal runs through Maryhill, at one stage forming a vital part of the local economy. It was for many years polluted and largely unused after the decline of heavy industry, but recent efforts to regenerate and re-open the canal to navigation have seen it rejuvenated. Along the canalside, from the city centre along into Maryhill: plans for canalside flats, similar to the rejuvenation of old industrial warehouses in Manchester, have been granted.

Twenty unique stained glass windows were produced by Stephen Adam in 1878 for the Maryhill Burgh Halls, depicting the many varied industries and occupations of Maryhill's inhabitants. The Burgh Hall, part of a complex of listed buildings including the former Baths & Wash-houses, the former Fire Station, and former Police Station, is currently being restored in a £9.2M regeneration project, and a number of the original stained glass windows should be on display from late 2011.[1]

Maryhill in the media

Maryhill has been the location for a number of television programmes and films, for example: