Fort St Catherine (or frequently Fort St Catherine's), is a coastal artillery fort at the north-east tip of St George's Island in Bermuda. Successively redeveloped, the fort was used first by Bermudian Militia and then by regular Royal Artillery units from 1612 into the 20th Century. Today it houses a museum. 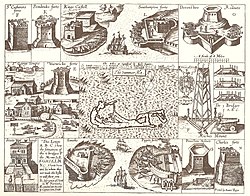 1624 Map of Bermuda, with illustrations of fortifications and important sites, including Fort St Catherine's at top, left

The first fort was built on the site from wood in 1612. This was replaced by a stone fort in 1614.[1] It was one of a number of forts built immediately following the official sanction given to the Virginia Company in 1612 for its possession of Bermuda, just three years after the wreck of the Sea Venture in 1609. The first forts were built around St George's Harbour, followed closely by forts on Castle Harbour, the Castle Islands Fortifications. These forts include the oldest surviving buildings, the oldest surviving fortifications, the oldest surviving house (a fort commander's house), also the first stone forts, the first stone house, and the first coastal artillery built by the English in the New World.

Most of these forts were designed to prevent an enemy entering St George's Harbour, either directly from the open Atlantic, or by way of Castle Harbour, but Fort St Catherine's was placed in such a location as to prevent vessels which had entered through the reefline from the open Atlantic by way of the main shipping channel from rounding St George's Island and moving to westward. Vessels passing this way are constrained by the surrounding reeflines, and must travel near to shore, and cannot take evasive manoeuvres, making the site a very useful one for coastal artillery.[1]

Use by the Regular Army

The fort was rebuilt five times, the last time at the end of the 19th Century, by when Bermuda had become the premier base for the Royal Navy in the Western Hemisphere, requiring a large military garrison with numerous forts and batteries to protect it.

Ultimately, the fort's exposed position made it more vulnerable than later forts, often designed to be protected from fire, and obscured from view, by earthworks. These included Fort Victoria and Fort Albert, on the hill directly behind Fort St Catherines.[2] In the 20th Century, Forts fell out of favour, and most of the coastal artillery still in use was placed in batteries with only minimal fortification, like the St David's Battery, Alexandra Battery, and Warwick Camp Battery. The 10 inch RMLs at Fort St Catherine were not replaced as the 9.2 inch RBLs placed at Fort Victoria made St Catherine and Fort Albert unnecessary: the RMLs were pushed over the side of the fort in the 1940s and have lain since rusting on the surrounding slopes and shoreline. The 10 inch RMLs now mounted in the fort were taken from Fort Albert in the 1960s. 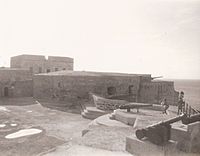 An exterior view of Fort St Catherine's in 1988

In the 1950s, a production of Hamlet was staged at Fort St Catherine's with Charlton Heston in the title role. It was a production noted not only for its star quality but for two fires; one staged for the climax but which ran out of control forcing the audience to retreat, and one more localised in Charlton Heston's parafin-soaked tights.[3] The firey climax is the subject of a painting by the actor himself, later acquired by the Masterworks Museum of Bermuda Art.[4]

Today, the fort houses a museum dedicated to Bermudian history, particularly the military aspect. As a result of their historical significance, with fortifications spanning the full four centuries of English settlement in the New World, the forts at the East End of Bermuda, together with St George's Town have been declared a UNESCO World Heritage Site named 'Historic Town of St George and Related Fortifications, Bermuda'.[5]